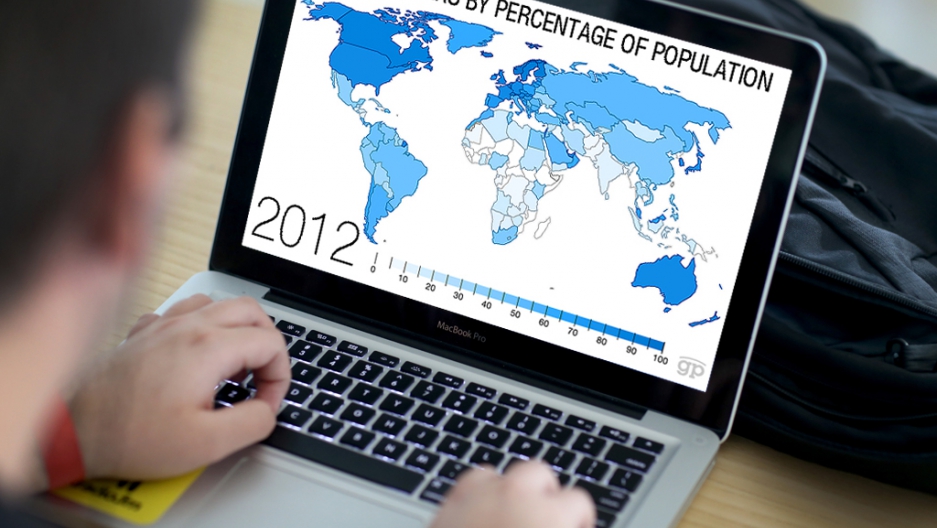 MIAMI, FL - FEBRUARY 01: A computer screen is filled with code as Dan Vera writes a program that he hopes will allow people living in Cuba to bypass the Cuban government censorship of the internet during the Hackathon for Cuba event on February 1, 2014 in Miami, Florida. The hackathon brought together experts and programmers to devise innovative technology solutions aimed at strengthening communications and information access in Cuba. The event is organized by Roots of Hope with support from the John S. and James L. Knight Foundation. (Photo by Joe Raedle/Getty Images)
Credit: Joe Raedle/Staff + Simran Khosla
Share

Ever wonder which countries were the first online? Which remain unconnected? We mapped World Bank data on internet usage to bring you this breakdown of the people who make up the world wide web.

Internet usage, it seems, is a pretty decent way to measure development. Richer and more developed countries have a higher percentage of their populations online (surprise).

The fact becomes even more apparent when you look at internet users by income group.  We can see that most of the online population comes from high-income nations, with upper-middle income groups starting to catch up in the 2000s. The poorer half of the world, however, was barely connected as recently as 2012.

But don’t be too quick to assume that developing countries are off the grid. In the last decade, developing nations in East Asia have started to catch up with their Western counterparts. Thirty-seven percent of the population in the East Asia and Pacific region was online in 2012, edging closer to the 44 percent of Europe and Central Asia.

Geographic region seems to be another big factor for internet use:

North America takes the top spot with the most users online. The chart even shows us a noticeable drop in internet users around 2008. The percentage starts climbing again in 2009.

While 35 percent of the rest of the world's population was online by 2012, Sub-Saharan Africa and South Asia are still struggling. With only 12 percent of its population online, South Asia pales in comparison to East Asia.