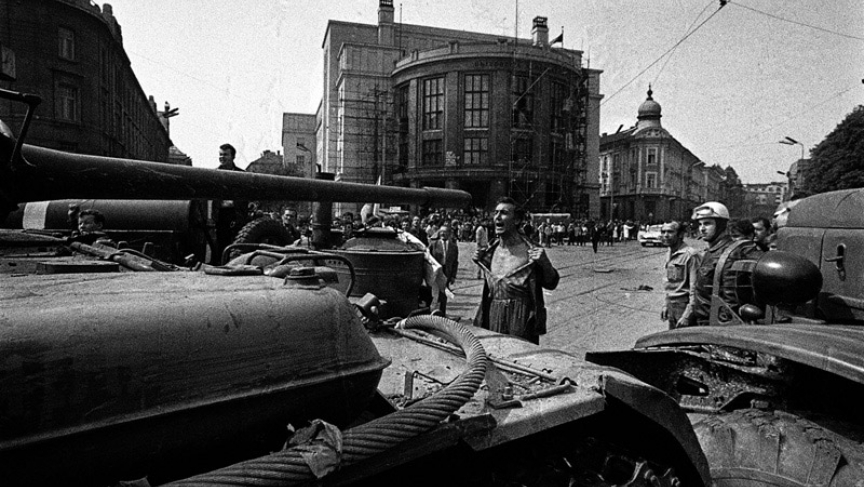 Emil Gallo, a Slovak plumber, stands in front of a Warsaw Pact tank and bares his chest in a gesture of protest during the invasion of Czechoslovakia in 1968.

As Russia flexes its muscles in Ukraine and Crimea, for many former Soviet citizens, the present looks all too similar to the past.

Russia invaded the Czech Republic on August 21, 1968. Prague-native Michal Lebl was just waking up, on his birthday, when he heard on the radio that the Russians were taking over his country. And he says the ghosts of Russian history are still alive in the region today.

"I was 17 when the Russians came, and at that time, at 17 years old, we didn't travel abroad so we didn't have too much of an idea of how it was in the West," says Lebl. "Then it started to turn a little bit in 1968, while we were listening to more of the Western radio and some books were coming in. We learned a little bit about what was happening and we were curious. But then for another 23 years it was basically stamped out — you couldn't travel, you couldn't read whatever you wanted, you were really limited in what you could do."

Lebl says when he looks at the people of Ukraine, he believes Russia will have a hard time, even with military force, turning them away form the West and back toward Russia.

"In Ukraine, they've tasted it for almost 20 years, so they know, and their connection to the West is pretty real," he says. "Now there's Internet, there's radio, there's TV — you know what is happening and you cannot completely cut off information like back in the 60s."

When it comes to the possibility of the Crimea crisis escalating into a larger conflict, Lebl considers it possible.

"I think that Ukraine lost Crimea, and that hopefully that is it and it will not go further. It can happen, but I'm hoping it's not happening," he says. "Unfortunately, the power of Putin is not very controlled by anything. He doesn't care what the world thinks, he is just one of the new, total, absolutist rulers. The only big opposition inside of Russia might be the people who are very economically connected to the West — the oligarchs. But once you have a mad man in the hat, it's hard — it's uncontrolled power, which is the worst that can happen to any country in the world."

The people who live in the countries between Germany and Russia are also suddenly more cognizant, considering their past as future. In the past few weeks, Vladimir Putin has been speaking of Russian territorial rights, and Germany has been trying to reassure Belarus, Latvia and Estonia that the political crisis in Ukraine will not be a chilling replay of brutal 20th century history.

Timothy Snyder, a professor of history at Yale University and author of "Bloodlands: Europe Between Hitler and Stalin," says, as Americans, we tend to look at this from a big picture, with little detail.

"When we think about history we use big concepts like Hitler or appeasement," says Snyder. "But from the point of view that lives in independent states in Eastern Europe or Central Europe, the 1930s were a period when independence and nation-statehood were chipped away at and destroyed."

Snyder says for those living in Austria, Germany, Lithuania or Poland, the situation currently playing out in is reminiscent of several incidents from the World War II era, including the annexation of Austria by Germany in 1938, and the destruction of Czechoslovakia by Germany following Germany's annexation of The Sudetenland, an area of Czechoslovakia inhabited by German speakers. Snyder says an analogy can also be found in the joint German-Soviet invasion of Poland in 1939.

"A lot of Poles remember [the German-Soviet invasion] in this connection, because the argument the Soviet Union used to invade Poland in 1939 was that the Polish state no longer existed," he says. "That's the exact same argument which Russian leaders make now about Ukraine — that despite appearances, there is no longer a Ukrainian state."

For others, Snyder says today's crisis conjures memories of 1940, when the Soviet Union occupied the Baltic states.

"And then there's a second element, a much deeper, darker element," says Snyder. "The lands between the Soviet Union and Germany in the 1930s were the places of a huge colonial competition between Nazi Germany and the Stalinist Soviet Union in which, all in all, about 14 million human beings were killed. In that period between 1933 and 1945, the absolute worst place to be of all was Ukraine. About half of the people who were killed, maybe a bit more, were killed in Ukraine — first as a result of Soviet policy and then as a result of German policy."

Snyder says about 3 million children, women and men in Soviet Ukraine were starved to death in 1932 and 1933. Additionally, another several hundred thousand were killed during Stalin's Great Terror, which began in 1934 before the invasion of the Soviet Union by Germany.

"The worst of the German occupation was precisely in Ukraine," Snyder adds. "Another 5 or 6 million people were killed as a result."

Despite the assurances offered by President Barack Obama and leaders of NATO, Snyder says the brutal history of years past has created a very deep seeded fear in the people of Eastern Europe.

"On the one hand, there is a deep, existential fear — the fear that comes from a very recent history of having your state destroyed, which most of us would have difficulty understanding," Snyder says. "At the same time, it's precisely that existential fear that leads to the very rational political desire to belong to the West or to belong to a military alliance which promises protection. Naturally, this is a moment when people in Estonia, Latvia, Lithuania, Poland and countries that have tasted Soviet aggression that are now members of NATO are wanting further assurances and true presences."

Ukraine — the nation with Russian troops camped on its border — wants to have closer cooperation with the West, even if such a relationship can not absolve all of their fears. But Russia's connections to the West are also stirring mixed feelings in Ukrainians.

"[Putin] is using Barack Obama to try increase these fears at the moment," Snyder says.

Snyder says Russia's Foreign Minister Sergey Lavrov is regularly in talks with US Secretary of State John Kerry, bypassing Ukrainian officials. Those talks, says Snyder, revive memories of the Munich Pact in 1938 in which British and French prime ministers Neville Chamberlain and Edouard Daladier signed an agreement with Nazi leader Adolf Hitler. The agreement averted the outbreak of war, but gave Czechoslovakia away to Germany.

"States were destroyed without the consent and indeed without even the voice of the people who were most directly concerned," Snyder says. "Putin is perfectly aware that these types of discussions with America terrify East Europeans. If you read the Russian press releases, they're edited in such a way as to maximize these fears — the Russians keep suggesting that the Americans are about to sell them out."

While Snyder doesn't believe that the United States would "sell out" Ukraine, he does say that Russian-American discussions about issues that are fundamentally Ukrainian are a ploy designed by Russia to frighten Ukraine and create an atmosphere of distrust.

"It's a concern which the Russians are very consciously trying to maximize — they're trying to present the Ukrainians as having no friend," Snyder says.