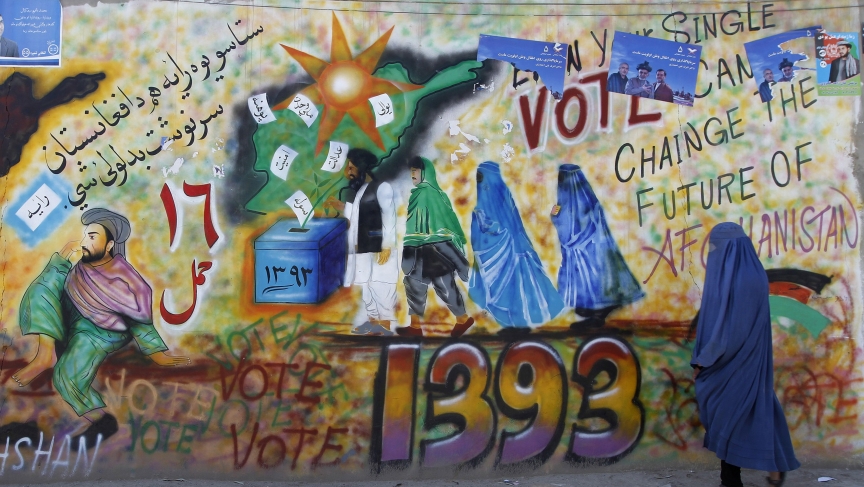 A woman in Kandahar walks past a wall with graffiti encouraging people to vote in Sunday's elections.

Afghans are to vote for a new president this weekend, to replace Hamid Karzai. This should be a hopeful moment for Afghanistan. The election should lead to the country's first peaceful transition of power in modern times.

But in Afghanistan, hope is often squashed by violence. One Afghan who's had her hopes dashed before is Rangina Hamidi.

Hamidi lived in exile in the US when the Taliban ruled her homeland. After 9/11 and the US-led invasion, she returned. The future seemed bright.

Rangina set up a non-profit in Kandahar to help women. She talked with The World about that in 2009. Her father became the city's mayor.

But then things began to fall apart.

Her father was assassinated in 2011. Rangina moved back to the States.

She still visits regularly, though, and says the mood is not as gloomy as you might expect.

“Surprisingly enough, when I was in Kandahar in February, I actually felt very safe,” she says. “The mood among the population at that time was very optimistic in terms of security.” Rangina is in daily touch with her staff and says the situation in Kandahar continues to be positive. It’s much worse though in Kabul, where she says many — especially the young — are still fighting for change.

But the positive outlook in Kandahar is not because the Taliban have been beaten. On the contrary, she says “the insurgents pretty much wiped out the city’s leadership and any people who were seriously trying to bring change.” Those fallen leaders include her own father, Ghulam Haider Hamidi.

“I assess the situation in Kandahar as a done deal,” Rangina says. “They did what they wanted to do in Kandahar and achieved their goal.”

She says the people there, like her, have largely opted for a grim neutrality, neither favouring nor opposing either side.

“It’s not really interesting enough for the insurgents to attack a people who are no longer active.”