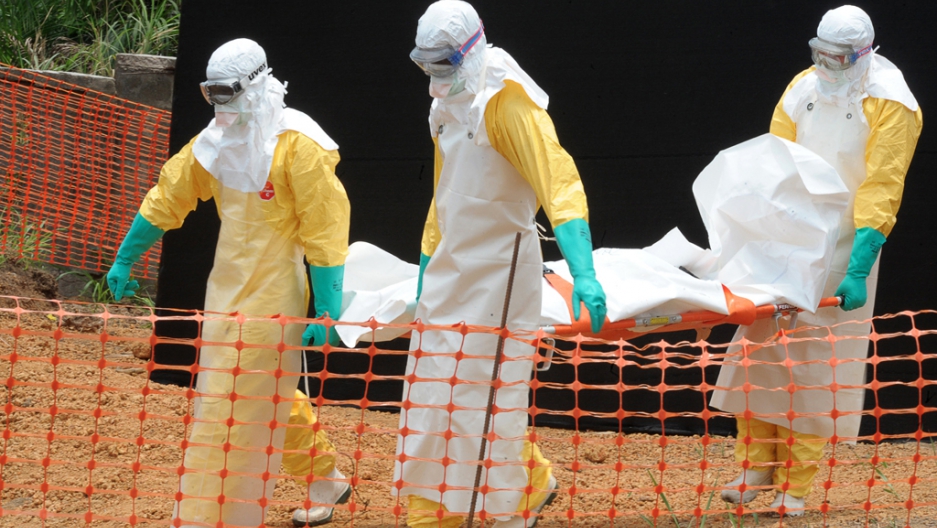 'Doctors without Borders staff carry the body of a person killed by Ebola virus in Guékedou, southern Guinea, on April 1, 2014.
Credit: SEYLLOU
Share

The Ebola virus is deadly, and this time it's spreading like doctors have never seen before.

“We are facing an epidemic of a magnitude never before seen in terms of the distribution of cases,” Mariano Lugli, coordinator of Doctors Without Borders in Conakry, Guinea's capital, said in a statement.

At least 83 people have died so far in what experts are calling an "unprecedented" Ebola outbreak in Guinea. The total number of cases stood at 127 as of Tuesday, and experts expect the toll to rise.

There's no vaccine or treatment for it, and the disease kills up to 90 percent of victims who suffer from extensive internal and external bleeding. Doctors Without Borders describes Ebola as "one of the world's most deadly diseases."

More from GlobalPost: The 6 deadliest Ebola outbreaks in history

Cases are already being reported in neighboring Liberia, with the potential to spread elsewhere. Here's what you need to know:

The Ebola virus causes viral hemorrhagic fever, which refers to a group of viruses that affect multiple organ systems and are often accompanied by bleeding, according to the Centers for Disease Control and Prevention.

It's named after the Ebola River in the Democratic Republic of Congo, formerly Zaire, which is where the virus was first detected in 1976.

A similar outbreak was also reported that year in Sudan.

There are five different strains of the virus, each named after the region where they originated.

The most severe strain, from Zaire, is the one suspected to be spreading in Guinea right now, according to the UN World Health Organization.

What are the symptoms?

Early symptoms include a sudden onset of fever, intense weakness, muscle pain, headache and sore throat. These can appear two to 21 days after exposure. More advanced symptoms include vomiting, diarrhea, impaired kidney and liver function and internal and external bleeding.

How is it treated?

There's no vaccine or specific treatment for Ebola. Patients are immediately isolated and "supported" by health care workers.

How is it transmitted?

Fruit bats may be the natural hosts of Ebola virus in Africa, passing the virus on to other animals. Humans can pick it up through contact with the bodily fluids of infected animals.

The virus spreads between humans via contact with bodily fluids containing the virus, or contact with an object contaminated with infected secretions.

Direct contact with corpses of Ebola victims can also result in infection.

How many cases have there been?

The last recorded outbreaks were in Uganda and Democratic Republic of Congo in 2012.