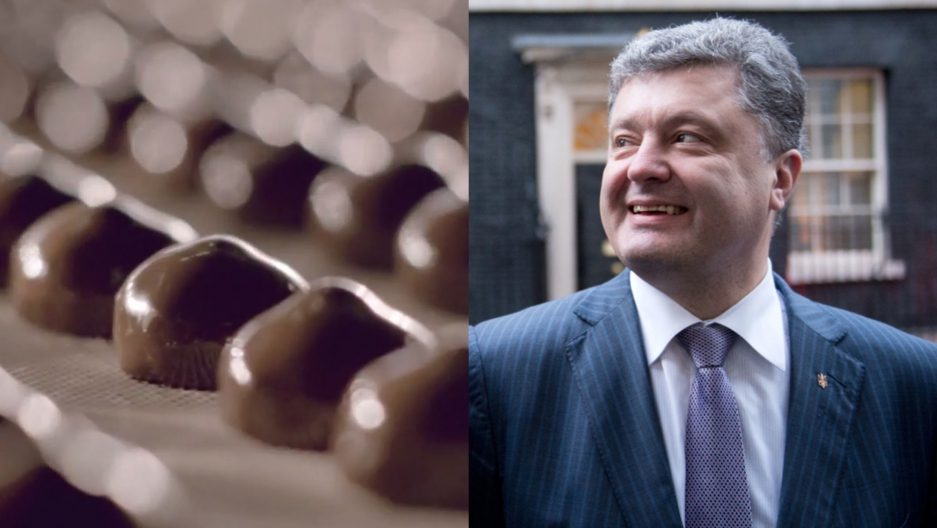 It sounds like the world’s greatest superhero matchup — The Chocolate King vs. Dr. Ironfist vs. The Gas Princess. Just last week they were the top three front-runners in Ukraine’s presidential election, set for May 25.

And now that Dr. Ironfist has officially tapped out, things are looking pretty sweet for the Chocolate King.

Okay, let's back up.

The Gas Princess, of course, is 53-year-old Yulia Tymoshenko, the opposition icon, former prime minister and current Fatherland party chair. The nickname refers to her lucrative dealings in the natural gas importing business during the 1990s. Despite her Orange Revolution credentials, she remains a divisive political figure and recent opinion polls give her just 8 percent of the vote.

Dr. Ironfist is the moniker of Vitali Klitschko, the boxing champ with the Ph.D. in sports science. The 42-year-old leader of the UDAR (“punch”) party was the opposition’s key candidate just two months ago. But his popularity has since plummeted to 9 percent. On March 26, he withdrew from the race and announced he was running for mayor of Kyiv instead.

Which brings us to the Chocolate King. Petro Poroshenko is a 48-year-old billionaire and member of parliament who made his fortune in — wait for it — the chocolate industry! While Ukraine’s presidential race has a dozen or so candidates (including Darth Vader), Poroshenko is the clear public favorite with a 25 percent rating.

But like Willy Wonka, there’s more to Ukraine's Chocolate King than meets the eye.

Here are 14 facts that shed some light on the man who might become Ukraine’s next president.

Poroshenko owns Roshen Confectionary, the 18th largest candy company in the world. He started out trading cocoa beans and bought up several confectionary plants during Ukraine's post-independence privatization period. He consolidated the plants and founded Roshen in 1995. Today the Kyiv-based company produces 450,000 tons of sweets a year — “chocolate and jelly sweets, caramel, chocolate, biscuits, wafers, sponge cakes, swiss rolls and cakes” — and rakes in $1.2 billion in global revenues. Poroshenko is actually a diabetic but still eats chocolate over sugar-free options. It’s “a stance he said ‘relates to everything — it is better to both eat and act genuinely and properly,’" quotes the Moscow Times.

2. He’s a self-made billionaire. Sort of.

Poroshenko is worth $1.3 billion, making him the seventh richest person in Ukraine (and #1,304 on the planet). In addition to his vast candy empire, his business interests include automobiles, shipping, agriculture and media. Poroshenko got rich buying up state assets after the Soviet Union collapsed in 1991, then moved into politics.  But unlike many of Ukraine’s other oligarchs, he is not widely perceived as corrupt. Kyiv-based political analyst Ivan Lozowy remains critical: “He bought his way in; that’s the way it works in Ukraine.” Yet one Euromaidan supporter sees a bright side: “He has so much money he does not need to steal any more.”

3. He’s a “champion political chameleon” with over a decade of experience.

Poroshenko is a centrist who’s worked for both pro-Russian and pro-Western administrations. First elected to parliament in 1998, he supported the Moscow-backed government and helped found Viktor Yanukovych’s Party of Regions. In 2001, he switched to the opposition to support his close friend Viktor Yushchenko, who became president during the 2004 Orange Revolution. Under Yushchenko, Poroshenko served as foreign minister and president of the central bank. When Moscow-backed Viktor Yanukovych became president in 2010, Poroshenko stayed on in parliament as an independent and briefly served as economic minister in 2012.

4. He — and his chocolates — are persona non grata in Russia.

Last summer, Russia banned Roshen chocolates for alleged health violations — part of Moscow's ongoing effort to apply pressure on pro-Western businessmen and steer Ukraine away from a trade deal with Europe. The ban cost Roshen millions in lost sales but Poroshenko responded by throwing his money behind Ukraine’s pro-EU opposition. Then last week, riot police seized a Roshen factory in Lipetsk, Russia for alleged chocolate-counterfeiting — costing even more money. But Poroshenko has won wide support for opposing the Kremlin and the repeated attacks on his business only boost his popularity, suggested The Wire.

5. He was the only oligarch to support Euromaidan.

During the months-long anti-government protests, Ukraine’s oligarchs remained largely silent. Poroshenko, on the other hand, spoke out against the Yanukovych administration and openly backed the Euromaidan movement. He could often be seen in Independence Square handing out chocolates to protesters and denouncing Ukraine’s corruption. On Feb. 9, he told a crowd of 50,000 protesters on the Maidan that the hryvnia’s devaluation proved that Ukraine’s economy “cannot function under such corruption” and that citizens had been “robbed of 10 percent of [their] income,” reported The CS Monitor.

Poroshenko owns the popular television station Channel 5 (or “5 Kanal”), which he launched in 2003 as the first dedicated news channel in Ukraine. The station broadcast live during the protests, airing opposition-supporting interviews and opinions avoided by state-owned media. Above, a Channel 5 reporter interviews her boss, Mr. Poroshenko, about the Kyiv protests on Dec. 2, 2013.

7. He earned street cred by climbing a backhoe.

Poroshenko has even put his body on the line to prevent violence during Ukraine's recent anti-government protests. At one point in February he climbed onto a backhoe “to prevent an angry demonstrator from driving it into police lines,” The New York Times reported.

8. He tried (and failed) to mediate the crisis in Crimea.

Police officers block pro-Russian protesters as Petro Poroshenko leaves in a taxi in the center of Simferopol on February 28, 2014.

On Feb. 28, as pro-Russian forces took control of Crimea, Poroshenko hopped a flight to Sevastopol in an effort to begin dialogue with separatist Crimean officials. He expected to be granted entry to the region’s parliamentary building, then occupied by masked gunmen and surrounded by hundreds of pro-Russian demonstrators. Instead, he was diverted by police, then chased for eight blocks by the angry, jeering crowd. He eventually ducked inside a taxi and flew back to Kyiv that night.

9. He’s got friends in all the right places.

(L to R) Vitali Klitschko, US Secretary of State John Kerry, Petro Poroshenko and Oleh Tyahnybok during their meeting in Kiev on March 4, 2014. Not pictured: Sergiy Tigipko. (Kevin Lamarque via AFP/Getty Images)

Poroshenko’s government background and business connections could help him bridge Ukraine’s east-west divide and secure the confidence of other oligarchs, reports Reuters. The Chocolate King — a known pragmatist (or flip-flopper, if you prefer) — offers an alternative to more controversial or less experienced candidates. Kyiv-based political analyst Volodymyr Fesenko elaborates: "A large part of the population wants an experienced crisis manager at the head of state…. Compared to Tymoshenko, Poroshenko is seen as a moderate and non-contentious character... even by the Russian speaking residents of eastern Ukraine."

10. He’s also got the legendary Dr. Ironfist in his corner.

In dropping his bid for president, Vitali Klitschko threw his full support behind Poroshenko. "We have to nominate a single candidate representing the democratic forces," Dr. Ironfist told UDAR party members. “This has to be a candidate who enjoys the strongest public support. Today, this candidate in my opinion is Petro Poroshenko." The two men's alliance is likely to damage the prospects of other presidential contenders — including Tymoshenko — while also ensuring that both “cement powerful positions in Ukraine's new government,” reports The Guardian.

In fact, Poroshenko has even asked Tymoshenko to “drop her challenge for the presidency and unite behind him — or at least run a contest that does not fracture the political unity of the country,” reports Reuters. The two opposition candidates have a long and uneasy history. In 2005, both Tymoshenko and Poroshenko served under Yushchenko’s government as prime minister and secretary of the National Defense and Security Council, respectively. Tymoshenko accused him of corruption and Yushchenko ultimately fired them both.

Poroshenko is a recurring character on a 3D animation show called “Fairy Rus” or “Fairytale Rus” (“Казкова Русь”). It depicts Ukraine as a dysfunctional fairytale state and features well-known political figures as characters, including Poroshenko, Tymoshenko, Vladimir Putin and others. Poroshenko is shown as a monarch in a tracksuit. But critics have panned the show for its lowbrow humor and poor artistic quality, and questioned whether the satire serves a purpose. Some episodes are available via YouTube.

Poroshenko has around 72,000 followers on Facebook and 13,400 followers on Twitter. Sadly, there aren’t any pictures of him posing next to his kingdom of chocolate.