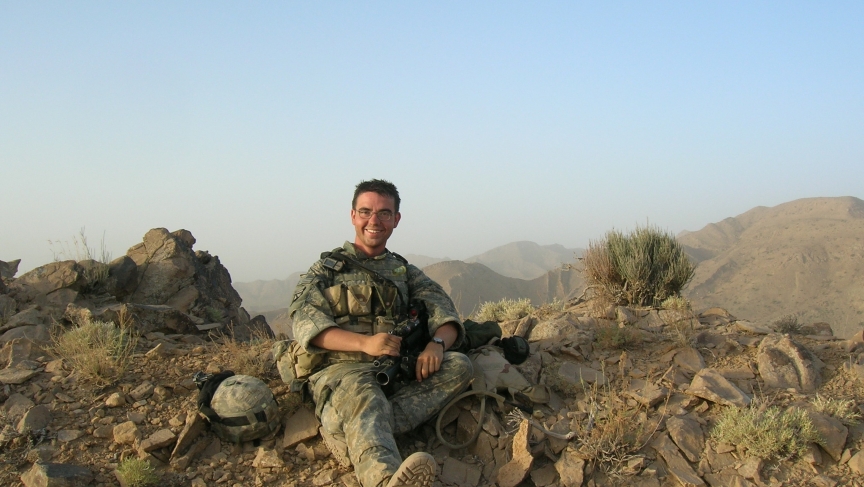 My conversation with former Army Sgt. Matt Farwell touched a lot of listeners. It touched me too, though I didn't realize how much it affected me until I listened to it again during a later edition of the broadcast here in Boston.

As I said at the beginning of the interview, we wanted to hear Matt's thoughts on the upcoming presidential election in Afghanistan. After all, he served there, he must have some perspective. He did have some, but what started emerging pretty quickly in our conversation was his own troubles and trauma stemming from his time in Afghanistan, trying, as he said, to keep himself and his buddies from getting killed.

It's never easy to do an interview when you think it's going to go in a certain direction, and then it veers off into another. It's not what you expect. It can throw you off your game, a game that wants you to be a "radio host," keeping the discussion moving, making sure that narratives are told and concrete points are being made. But when Matt started opening up his heart and soul and showing us the demons that still haunt him, that's when you have to stop being a radio host and just be a human, listening to another human.

I came out of the studio aware of the power of what I had just heard. But it wasn't until 8 p.m., standing in front of my kitchen sink washing a dish, that the power of the interview really hit me. I almost broke down, just assessing the full weight of Matt's words and, mostly, his honesty.

We rarely get to hear that.

And, like I said, Matt really struck a chord with listeners, too.

Naomi Rosenfeld wrote us asking to send a message to Matt:

"…Please tell him that his interview was a powerful voice for the reality of each of us trying to come to terms with our own intimate experiences  on a day to day basis. I appreciated that his own voice came through over and over though he didn't have much to say about the experiences of other people in Afghanistan. I wish him strength and clarity as he continues. And thank you for airing this interview."

"As a former journalist/photojournalist, I want to compliment you on your interview today with the disaffected American vet who served in Afghanistan. You began by asking him about the election, (-- but it was clear the 800 pound Gorilla in the room was this vet's traumatized emotional state.) -- For you to sense that, and allow  the interview to go in a more personal direction resulted in a very powerful radio-- and a great human moment.

(Most radio programs would edit the interview, or get the guy off the air as quickly as possible.)

I really respect that you allowed that man to express himself (and thereby speak for many vets who are now trying to live with similar trauma from our wars overseas.)"

"Your interview live today with Sargent Matt (? forgot his surname while searching for your website) the Vet who you asked about elections Afghanistan---struck me with his total honesty.

He was not rude, but he really told the truth about his mental, emotional & philosophical reaction to his own experience & his 'burnt love' for Afghanistan's terrible beauty.

I was sick listening to him, because somehow I have not been able, as a letter writing/voting citizen--to prevent men like him going  to these places, where nothing seems to improve, or if it has, still our warriors come home much dis-improved. Such a steep price paid for paltry improvement.

His goal to merely keep out of jail or hospital in 2014, after 5 years of failing at that hope---just showed the wreckage, the DEGREE of wreckage, we have reaped by sending our  warriors away.  I felt love & admiration for his strength, despite his scars--his own humanity.  Despite being cynical -- still deeply there, deeply himself.

Thank you for your persistent interview so that we could hear ALL he had to say.  And please, will you thank him for his strength for me?  a feeble gift , but all I have to give him besides my prayerful best intentions.  My own cynicism and brokenness runs parallel to his--active citizenship--for what?  No one listens anymore in Washington. Speaking of elections.  They are so cynical they heap our youth on the burning fires of their own hubris."

If you're a veteran and want to join our community of vets, text "return" to 69866. Like Matt, these veterans stay in touch with us and offer an invaluable perspective.