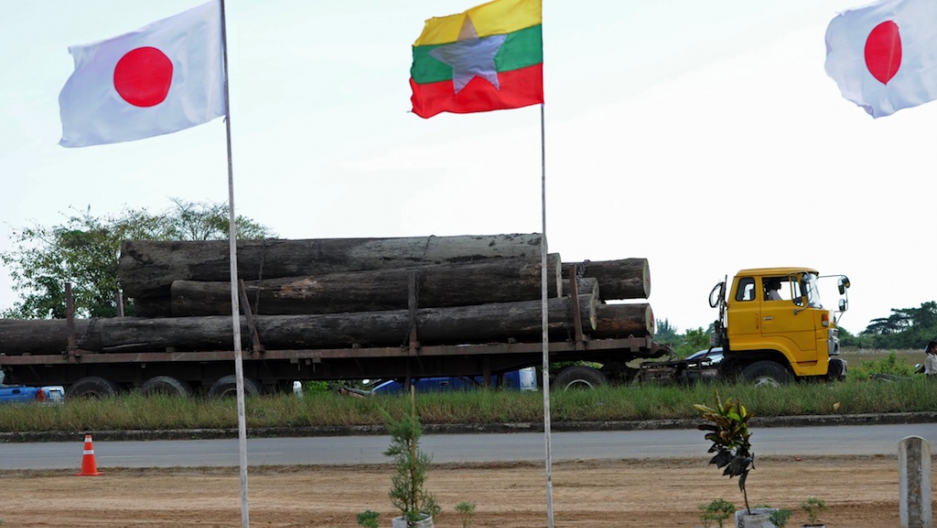 The Thilawa Special Economic Zone (SEZ) outside Rangoon, funded by the Japanese government through the Japan International Cooperation Agency (JICA), has forcibly moved hundreds of Myanmar villagers into a flood-prone, cramped resettlement site without basic compensation. It will displace nearly 5,000 more in the coming months.

Developers are building Thilawa on many of the same human rights violations that paved the way for the notorious China-backed Myitsone Dam and Shwe Gas Pipeline. But this time, the international community isn’t protesting as it watches Japanese auto darlings Mitsubishi, Marubeni, and Sumitomo set up camp on the confiscated land of Myanmar families.

Japan has meticulously ignored how the Myanmar government has used coercion and intimidation against the local community to clear land for Thilawa. In August 2013, Myanmar authorities coerced villagers to sign inadequate relocation agreements by threatening to destroy their homes, leaving the courts as their only recourse. Authorities did not explain the terms of the agreement or provide copies to villagers. The community brought its pleas for help to JICA, which didn’t respond.

Authorities had rashly set November 8 as the deadline for the project’s Phase I relocation of nearly 300 villagers.

But on November 8, the relocation site was just an empty muddy field, completely unprepared for residents.

Civil society groups intervened to postpone the relocation while houses were hastily built, and the relocation took place in December instead. But the site is still grossly inadequate: houses packed in like sardines, no replacement farmland, a lack of clean water and serious concerns about flooding and structural stability.

Yet Japan is staunchly silent. Recognizing the injustices at Thilawa would require postponement and careful due diligence, Japan isn’t willing to slow down. As Myanmar authorities were forcing Thilawa villagers off their land in December 2013, Japan was signing the Japan-Myanmar Investment Agreement in Tokyo to strengthen its business relationship with Myanmar.

Residents resettled in December are now suffering from the unfair relocation agreements. Their so-called transitional assistance has run out, and they are having difficulty making ends meet without land access.

Community representatives and NGOs have repeatedly called on JICA officials in Rangoon, Tokyo, and Washington to suspend the project until the community can be properly resettled. But JICA officials have washed their hands of the grievances and dismissively told residents to go speak with the local Myanmar authorities — the same authorities that coerced them into signing the relocation agreements.

Japan is no fool; it knows how to responsibly resettle communities. JICA’s Guidelines on Environmental and Social Considerations affirm Japan’s commitment to meeting international standards on the rights of resettled communities. Under the guidelines, the livelihoods of resettled families should be improved, the local human rights situation should be taken into account and the affected population should be closely consulted.

The RWP sets compensation for lost crops and livestock far below the current market price, and does not help residents transition into new jobs. Special assistance to vulnerable households — fatherless families and families with disabilities — is a mere 25,000 kyat (US$25), the cost of a 50kg bag of rice.

Despite the thousands of people that are losing their land, the developer’s Environmental Impact Assessment (EIA) – a JICA requirement – is a joke. It fails to report on the impacts of resettlement.

JICA’s procedures mandate that the EIA must be made public for 120 days before JICA can finalize agreements and disburse its $280 million loan for Thilawa. This period expires in April. While it still holds financial leverage, JICA must insist on adequate compensation for the residents who have already been relocated and ensure better outcomes for the thousands who will be relocated.

Thilawa households won’t be the only victims of irresponsible foreign investment projects; Japan’s refusal to even attempt to comply with its own resettlement guidelines bodes ill for families throughout the country. These families are the people paying the real costs for new, negligent development projects in Myanmar — impoverishment and loss of homes, land and livelihoods.

Rachel Wagley is a recent graduate of Harvard University and a 2011-12 Fulbright grantee to Thailand. She is policy director of US Campaign for Burma, an advocacy group based in Washington, DC.