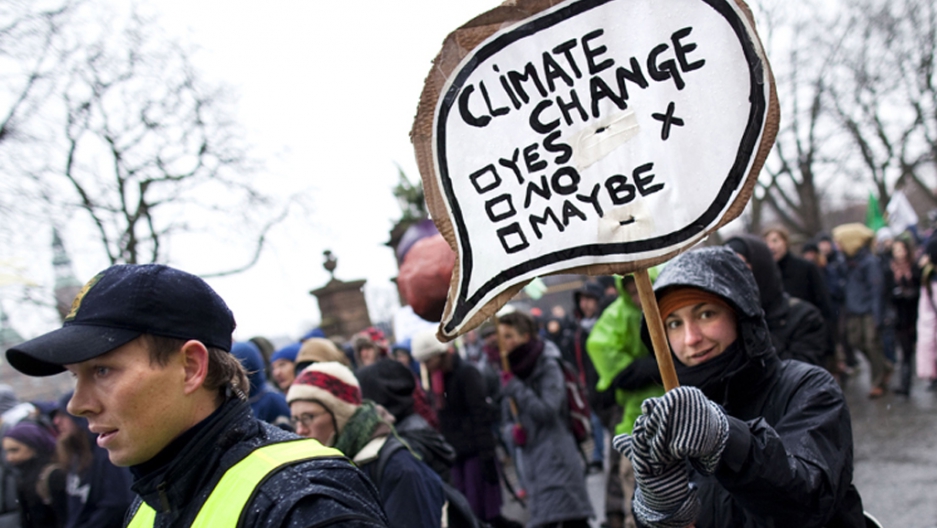 Environmental activists demonstrate in Copenhagen on December 15, 2009 on the sidelines of the COP15 UN Climate Change Conference. Ministers at the UN's climate conference on Tuesday wrestled over key issues bedevilling an envisioned worldwide pact to roll back the threat of global warming. AFP PHOTO / ANDREAS HILLERGREN
Credit: ANDREAS HILLERGREN
Share

So, what keeps the world from sleeping at night?

Turns out it's climate change, according to a recent Pew study that surveyed the public in 39 different countries. The survey had 37,653 respondents. We charted the results. (If a country name appears to the right of the vertical axis, it means that country doesn't consider the threat a top concern.)

Financial stability is also a common fear around the world, particularly (and not so surpringly) in Europe, where the euro crisis has dragged on now for a decade. Islamic extremism makes it into the top three, with the United States, Europe and parts of Africa listing it as a major concern.

American concerns run the typical gamut from Iran's nuclear program to North Korea, though Japan, South Korea, Italy and the Philippines viewed the latter with more concern than America.

Such fears aren't always shared by region. Americans and Canadians have different opinions on global threats. While America's top worries seem to be nuclear programs and Islamic extremism, more than half of the Canadian population believes climate change is their biggest concern.

The Middle East had the most varied survey responses. No one concern dominated the region. Some feel Iran's nuclear program is the biggest concern, while others are more worried about financial stability.

For the Palestinian territories, US influence in the region is their biggest concern. This opinion is shared by Turkey, where 4 out of 10 respondents view US influence as a major threat.

Asia is also most concerned with climate change, with the exception of Malaysia and Pakistan. Six out of 10 Pakistanis listed US power and influence as their major concern.

More Latin American respondents viewed climate change as a major threat than anything else, according to the report. Other big worries included the nuclear threat from both North Korea and Iran. Argentina and Venezuela see US power and influence as one of their top three threats.

Islamic extremism, international financial stability, and climate change are the top three concerns in almost all African countries surveyed. The outlier is South Africa, where China's power and influence is the second biggest threat according to respondents.