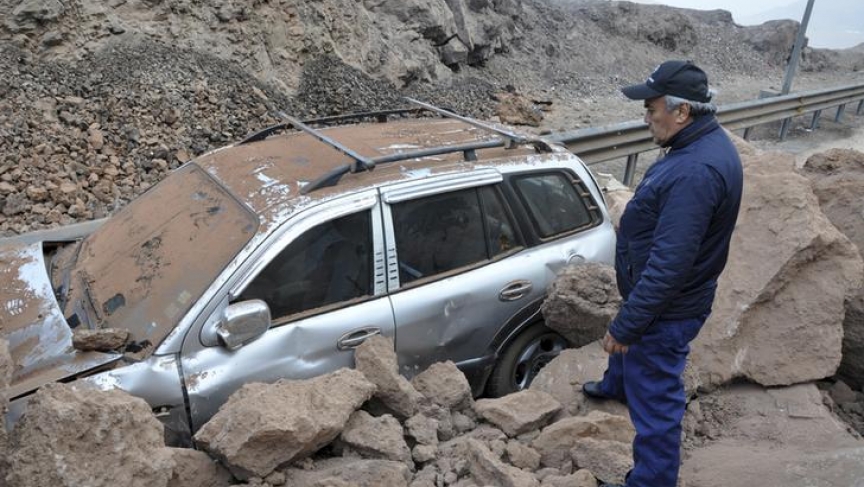 A rescue worker inspects a car caught under a landslide after an earthquake and tsunami hit the northern port of Iquique, April 2, 2014.

Chile is no stranger to earthquakes. It's geographically located on what's called the Ring of Fire: the zone that encirlces the Pacific Ocean and includes areas where earthquakes and volcanoes occur most on the planet.

Tuesday's quake came with force; it had a 8.2 magnitude and triggered a tsunami alert. The epicenter was about 52 miles northwest of Iquique, a mining area.

While the magnitude of this earthquake was considerably big, so far only six people have been reported dead.

Any death is tragic, but given the magnitude of the quake, was it luck or preparedness that the numbers aren't higher?

Jonathan Franklin, reporter for The Guardian newspaper, believes it was more a matter of luck.

"When the first reports come in of an 8.2 magnitude earthquake, it's clear that this could provoke a massive tsunami," he says. "In this case, it didn't... for the size and energy released in this quake, Chile really dodged a bullet because it could have been far worse."

Franklin, who's based in Santiago, says residents there didn't feel the quake, but that every one is shaken.

He added that northern Chile has been feeling strong tremors for about a month and so "paranoia is not an understatement" when it comes to people's reactions.

"People are really freaking out. This has been a topic of gossip and conversation for weeks now. People are stocking up on food, water and gasoline," he says.

But since Chile is an earthquake-prone country, over the past few years, the government has made it its mission to improve preparedness.

"There has been some criticism that the government's emergency telephone networks are not up to speed, but in general, a lot has been done," Franklin says.

For example, there are constant evacuation drills and the buildings are constructed to withstand very strong earthquakes Franklin says. It's also not unusual to see thousands of people being evacuated in a drill in the coastal areas in Chile.

But still, the earthquake on Tuesday night has made people nervous. Franklin says it's not clear if "this was the big one that puts Chile in the clear for a while, or a prelude to something bigger."

For now, uncertainty and fear reign.