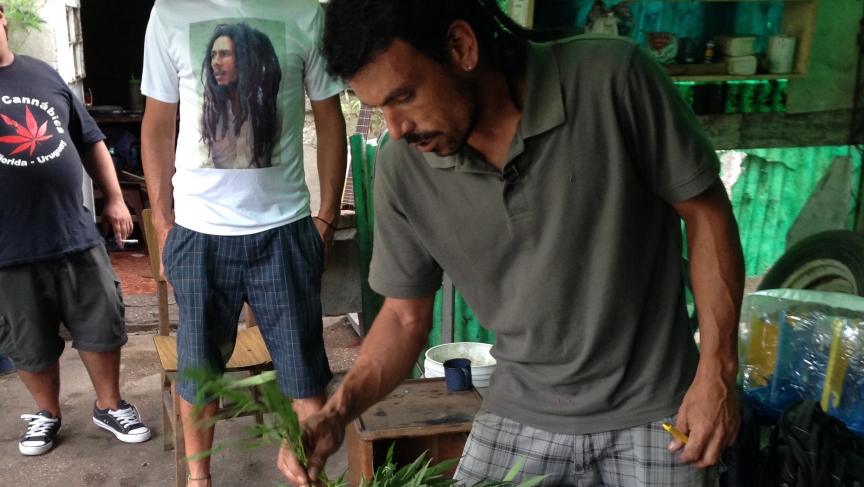 Sebastian Castro teaches a workshop on how to plant marijuana from trimmings in preparation for the new rules that would allow consumers to have up to 6 plants at home if they get licensed.

In the backyard of a house in Uruguay’s capital, Montevideo, Sebastian Castro is teaching a class on how to plant marijuana from trimmings.

“You can produce about 350 grams of cannabis from six or seven plants,” he says.

What Castro is teaching here used to be illegal in Uruguay. But last December, Uruguay became the first country to legalize the production, distribution and sale of marijuana.

The regulations are expected to be issued sometime in April.

Once that happens, Castro hopes to launch a legal business selling seeds to producers.

“I’m a gardener by trade so it would be ideal for me to merge planting cannabis with what I do for a living. It would be like putting the cherry on top,” he says.

Castro is 35, and he’s been planting marijuana for his own use for over 16 years. Recently, he joined a new network of 140 growers who want to kickstart a larger project -- supplying pot for pharmacies and medical marijuana clubs.

“This is going to create new opportunities for small growers so they can make a dignified living working with marijuana,” he says.

It’s not just about business. Castro says the law will go a long way toward changing the negative image of growers and users. For too long, he says, people like him have been marginalized for growing pot.

You had to be totally clandestine, he says, and you were treated like “scum.”

Milagros Gallero also knows what it’s like be on the fringes. She runs the Network of Drug Users and Cannabis Growers out of her home. The police raided it a few years ago. For her, the new law is a form of rescue.

Gallero, who has two kids, struggled for years with an addiction to cocaine paste, a huge problem in Uruguay. Now, she helps others in similar situations, particularly women. She says the law could provide a legal source of income for single mothers who used to face jail time for selling drugs.

“They do it because they need a plate of food to feed their children,” Gallero says. 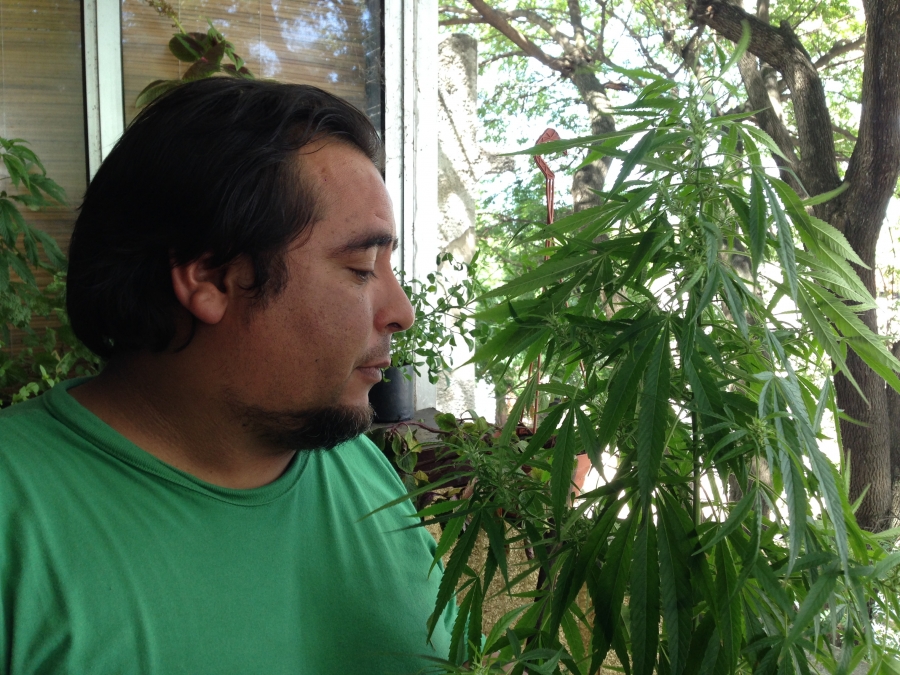 Julio Rey is the president of the National Federation of Cannabis Growers.

And legalization could help in another way. In a country of three million people, the illegal marijuana industry netted about $30 million a year. But now, consumers will pay taxes and licensing fees, Gallero says.

“Millions of dollars that have gone to drug traffickers can now go into education and drug prevention,” she says.

But most Uruguayans aren’t so optimistic about what the new law will bring. In a recent survey, more than half said they don’t support it.

One of the opponents, Verónica Alonso, an opposition lawmaker, argues that the law is too weak and should be scrapped.

She says there’s no way to enforce the legal limit of six plants that people 18 or older will be able to grow at home, and she worries that some might grow more and start selling pot to teenagers.

That’s not going to happen, according to Julio Calzada, the secretary general of Uruguay’s National Drug Council, the agency in charge of implementing the new law. People will have to be licensed at every point, he says, from home growing, to purchase, to commercial production.

“This is not about liberalizing the market,” says Calzada. “It’s about regulating a market that already has 150,000 users a year.”

This will also put an end to a legal paradox in Uruguay, where it was against the law to buy pot but not to use it, he says, and it will take the country out of the war on drugs that’s been so costly in places like Mexico.

“The 60,000 dead [there] are the collateral damage of the war against the cartels and I think they make too all clear that the military approach doesn’t work,” he says.

The new law might not work for the rest of Latin America or the United States, says Calzada, but for now, it’s the answer for Uruguay.