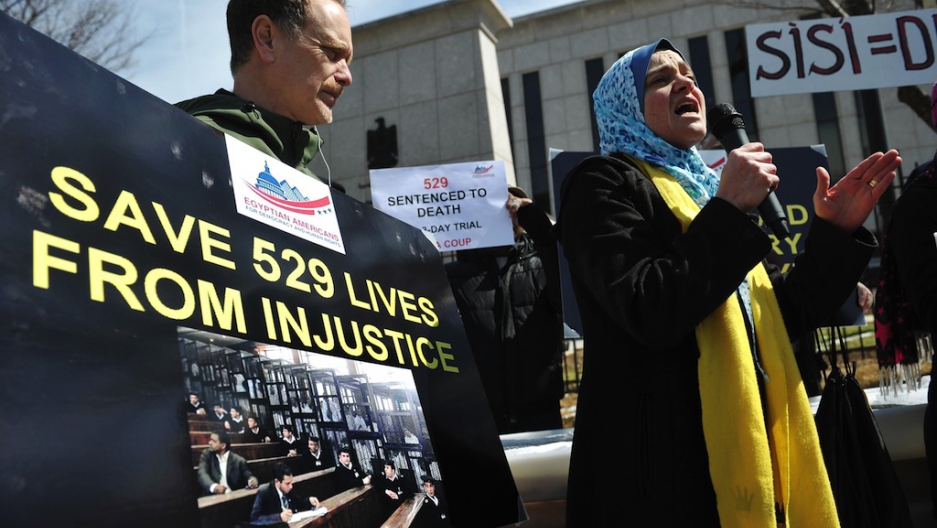 Hala Abdelaal speaks during a protest against the government of Egypt on March 27, 2014 outside of the Embassy of Egypt in Washington, DC. The group was protesting against the mass sentencing of 529 supporters of deposed Islamist president Mohamed Morsi who were given the death penalty.
Credit: MANDEL NGAN
Share

Mass death sentences were handed down recently in Egypt in a trial that highlighted the flaws in capital punishment. A new report by Amnesty International reveals that a number of other countries in the Middle East and North Africa are at the forefront of an isolated group of executioners that have fuelled a rise in global figures.

LONDON — It sounds like a scene from a grisly horror film; five decapitated bodies swinging from a horizontal pole suspended over the main square in the city of Jijzan in southwestern Saudi Arabia. Beside each body hangs a plastic bag containing the victim’s head. Yards away, students are arriving at a local university to take their exams.

These haunting images of five Yemenis who were executed in Saudi Arabia last May 21, provide gruesome details of the aftermath of a public execution.

In many regions of the world from China to the US, in the Middle East and in pockets in Africa, people continue to live under the specter of the death penalty, often out of the public eye.

Amnesty International’s latest global report on the death penalty documented that at least 23,392 people were facing death sentences worldwide at the end of 2013.

The overall trend in recent years shows most countries moving away from capital punishment.

But disturbingly, a number of Middle Eastern nations have emerged at the forefront of an increasingly isolated group of entrenched executioners fuelling the latest spike in global figures.

Iran, Iraq and Saudi Arabia alone accounted for almost 80 per cent of all reported executions carried out worldwide in 2013, excluding China. An upsurge in executions in Iran and Iraq explains a global rise of almost 15 percent from 2012.

Across the Middle East and North Africa, at least 638 people were executed in 2013 using methods ranging from beheadings and hangings, to death by firing squad.

Whatever the method, the horror and outcome remain the same.

Iran is executing at an alarming rate with an almost 20 percent rise in 2013. In Iran, 369 officially acknowledged executions were recorded by Amnesty International, but hundreds more were carried out — some of these in total secrecy — according to credible sources, bringing the total to more than 700.

Iraq recorded a stark rise for the third year in a row, with at least 169 executions; this is the highest figure since Iraq reinstated the death penalty in 2004.

Saudi Arabia also maintained a consistently high rate of executions with at least 79 executions last year. Three of those executed were convicted of crimes they allegedly committed when they were under 18 — a clear violation of international law.

Kuwait resumed executions for the first time in six years. Death sentences carried out in Gaza, in the area of the Palestinian Authority administered de facto by the Hamas authorities, and also, in Yemen, paints an increasingly worrisome regional picture.

Limited positive developments were noted in the United Arab Emirates (UAE) where no executions were carried out in 2013 and in Bahrain where no death sentences were issued.

Equally alarming is the number of death sentences imposed across the region after grossly unfair trials, including the widespread use of “confessions” extracted through torture.

In Iraq, Amnesty International documented 90 cases of inmates on death row that had been convicted of terrorism or other crimes on the basis of forced “confessions” in recent years. At least 14 of them have already been executed.

In Kuwait, Saudi Arabia and the UAE, some foreign nationals facing capital punishment were denied adequate translation facilities during their trials, hindering their ability to prepare a proper defense.

Activists and opposition figures are also among those who have found themselves condemned to death in politically motivated cases.

The argument that the death penalty is only used as retribution for horrendous crimes also does not bear scrutiny.

In many cases death, sentences are imposed for offences other than murder, falling short of minimum international standards.

In Iran, Saudi Arabia, and the UAE, capital punishment was implemented for drug offences. In Saudi Arabia, one man was executed for the “crime” of “adultery.” Vaguely worded offences, such as moharebeh (“enmity against God”), were used in Iran to repress activities of ethnic minorities.

The arbitrary and sometimes capricious attitudes towards the death penalty that many countries display, only serve to compound the tragedy surrounding its use.

For many governments, the death penalty is used as a populist tool to demonstrate a tough stance on crime. Yet there is no convincing evidence that its use has any particular deterrent effect. This has been shown in multiple international studies.

Gruesome beheadings in Jijzan city square in Saudi Arabia are ultimately no different from hangings or death by firing squad behind closed doors.

Regardless of the method used, the death penalty is the ultimate cruel and inhuman punishment and violates a fundamental right to life.

The global trend away from the use of the death penalty offers a glimmer of hope. Governments that still execute are on the wrong side of history. It is high time that the remaining executioners in the Middle East and North Africa, along with China, the US and all other countries that continue to cling to this form of punishment, recognize this and abolish the practice once and for all.