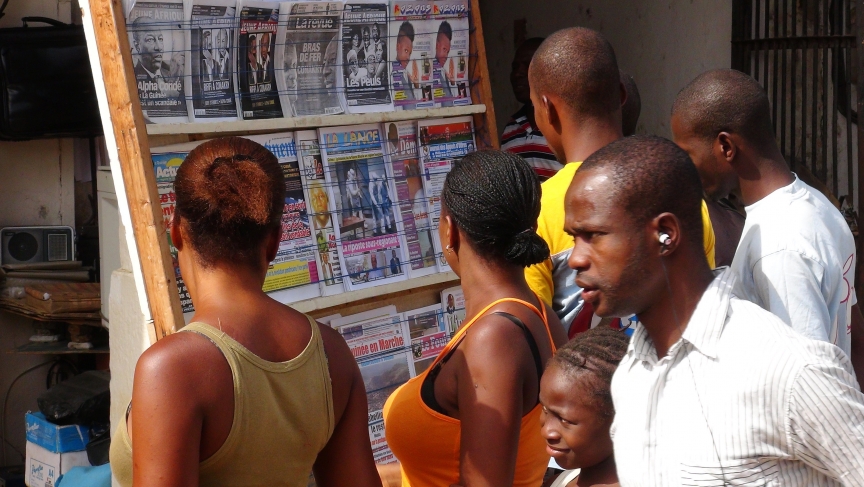 News of the spread of the ebola virus has residents of Guinea's capital Conakry on edge.

A fast-moving ebola outbreak originating in a border region in southeastern Guinea has already taken at least 83 lives. In recent days, the virus has shown up in neighboring Liberia, and in Guinea's capital, Conakry.

Scientists say in this instance, the virus likely spread to humans from fruit bats. The bats are a delicacy in parts of Guinea and the government has now banned their sale and consumption. The World Health Organization says it's taking the outbreak "very seriously."

Tarik Jasarevic, a spokesman for the WHO in Conakry, says there's evidence that the virus has spread from infected individuals to health care providers.

"What happens is that when an infected person comes to a health center or hospital, health workers do not know this is ebola, so they handle patients the way they would do with anyone else," Jasarevic says. "What is really important is to sensitize health workers so that when they see patients that present symptoms ... they really take protective measures so they don't get infected themselves."

Ebola is spread via bodily fluids, so great care must be taken to protect those tending to those who are sick. Ebola is extremely lethal. Jasarevic says during this outbreak, an estimated 65 percent of those who have contracted the virus have died.

"It's important that we find people who have been in contact with those we know are infected, so we can check on them, make sure that they don't have symptoms, and if they do that they are placed in an appropriate setting," Jasarevic adds.

Although measures are being taken at Guinea's border, Jasarevic says it's more important to tackle the ebola outbreak at the source of the infection.

"We are focusing now on isolation wards, on tracing the contacts, and trying to find those infected," Jasarevic says.

Guinea's Ministry of Health is holding daily press conferences to provide residents with information and dispel rumors about how ebola is contracted.