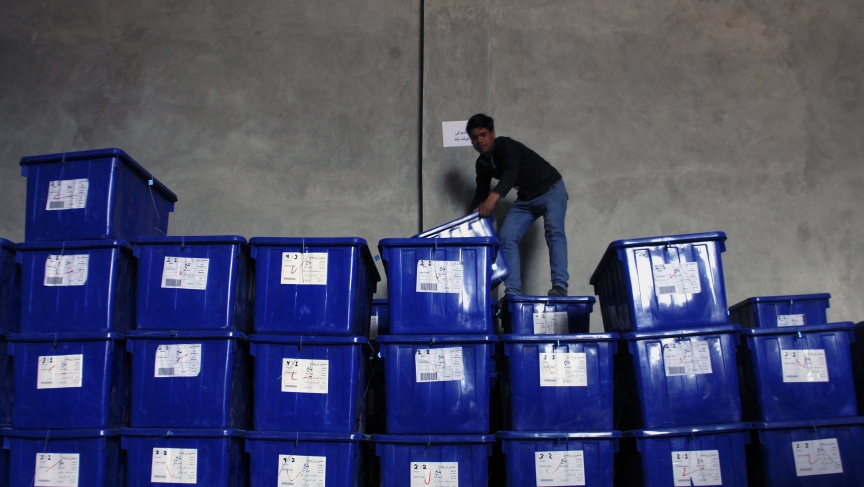 The Taliban have vowed to disrupt the Afghan presidential elections on Saturday.

In recent days. suicide bombings, land mines and roadside bombs have raised tensions in many areas of the country. But while Afghan voters are on the alert for violence, many are also lining up in huge numbers at voter registration offices.

"There is a lot of resilience in Afghans," says the BBC's David Loyn. "and that's reflected in the enthusiasm at some political rallies. Candidate Abdullah Abdullah got a huge cheer from a crowd at one rally over the weekend after he said 'We will not be intimidated. We will vote!'"

Still, Loyne says many fear that the Taliban will not only try to disrupt the elections with violence, but will also punish voters who go to the polls at all.

"One of the ways to prevent fraud in this election is to ink voters' fingers with an indelible blue ink," Loyne says. "Well, if people appear with ink on their fingers after the voting, then the Taliban, of course, have the opportunity to kill them because they know they've participated in the election."

Security for polling places is being managed by units of the Afghan army and police forces, many of them well-trained. And up to 200,000 election monitors — some foreigners and many from independent Afghan organizations and various Afghan political parties — are expected to be on the lookout for election fraud.

"One of the biggest fears," he said, "is that polling stations that have no voters because the violence is too great still return filled in ballot papers."

Those votes come from corrupt local officials and others interested in stearing, or stealing, the election.