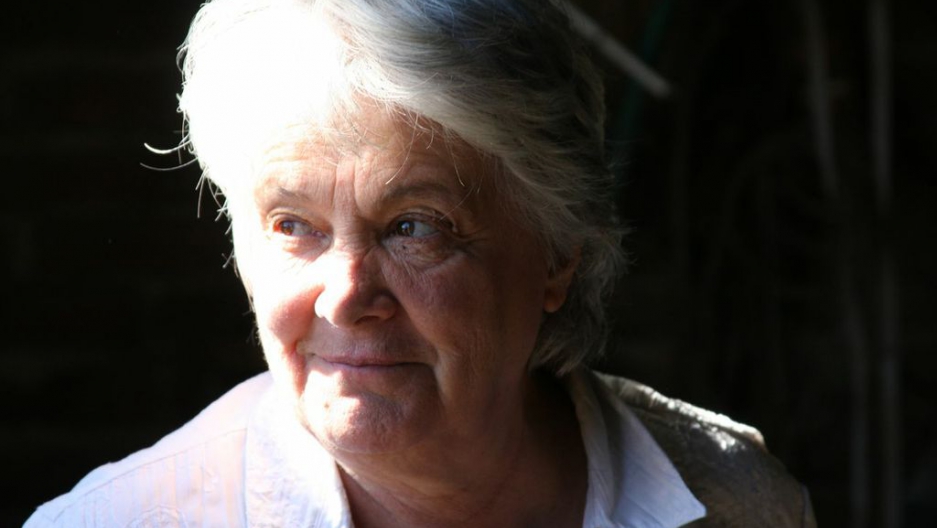 Update: On Sept. 13, 2017, Lucía Topolansky became Uruguay's first woman vice president. The story that follows, originally published in 2014, offers a close look at the politician at a time when her husband José Mujica was president of the South American country.

He survived 14 years in prison, fought as a revolutionary, gives away most of his salary, drives a crumbling VW bug and shows up to official meetings in his sandals.

Hell, he even signed a law making Uruguay the first country on the planet that will grow, harvest, sell and tax marijuana.

But you know who’s just as much of a badass, if not more?

A lot of Uruguayans, especially conservatives, don’t like the first lady very much. In the swankier suburbs of Montevideo, residents often turn up their noses at the mention of the former rebel's name. She’s dangerous, they say. An assassin. A liar, and a thief.

In prison, Topolansky was known as “La Tronca,” “The Tree Trunk.” She helped orchestrate two stunning jailbreaks and escaped herself.

It’s hard to reconcile this image of a bloodthirsty firebrand with the matronly 69-year-old who shuffled around her small flower farm during a recent visit by GlobalPost, proudly showing off the first truck her husband ever bought — an old Ford now sprouting daisies in the corner of a field.

Maybe the years of politicking and forced smiles have gotten to her? Maybe she’s just as conniving and pernicious as her reputation among some of this city’s elites? Or maybe she’s just a mellowing, old-school lefty, her rhetoric softened like a well-worn mate gourd into something modern Uruguay can comfortably grasp?

More from GlobalPost: 7 of the most badass women who ever lived

Whatever the truth, over hours spent getting to know Topolansky, she seemed as genuine and kindly as her supporters make out. 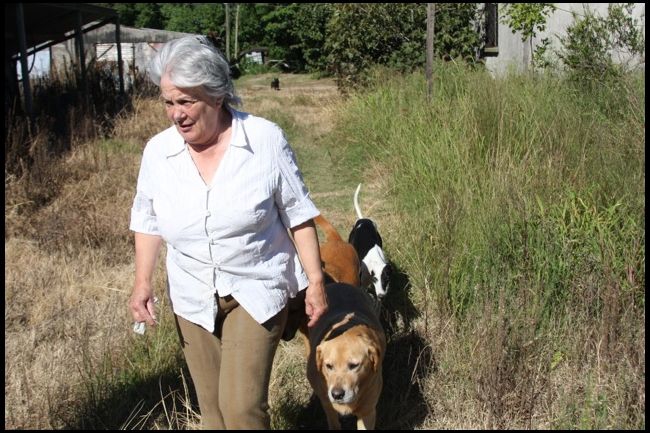 Lucía Topolansky with her dogs on the family farm.

We discussed politics, philosophy, farming and her daily routine. Our conversations were interrupted only by the occasional crow of her cellphone (her ringtone is an actual rooster, recorded on her farm). My study of the first lady culminated with a short trip to her house and a chat with Topolansky and her husband, El Presidente, in their small front garden.

I found her to be a self-professed radical with a mysterious past. A strong supporter of Uruguay’s progressive legislative quest, she’s proud of Uruguay’s historic marijuana movement, though she said she’s never so much as smoked a cigarette.

As committed to her nonconformist husband as she is to her battle for equality for all Uruguayans, Topolansky has spent a lifetime fighting. And as she closes in on 70, the former militant said she’s driven by a broader desire than fame or fortune.

“My only addiction is love,” she said.

There’s more about Uruguay’s first lady that’s intriguing. Let’s look at the six most interesting facts about the woman who stands beside the “the world’s poorest president,” but whom the world has chosen largely to ignore.

Fact: She was a hardcore guerrilla

President Mujica is perhaps best known for his involvement in Uruguay’s armed insurgency of the 1960s and 1970s, when he fought with a leftist rebel group.

But it’s his wife who orchestrated one of the most stunning actions of the guerrilla campaign, the sacking of the Monty Financial House, a private banking institution, on Feb. 16, 1969.

Though it’s hard to establish exact details about the assault, here’s how Topolansky tells it: While working at the Monty to fund her way through architecture school, she discovered a black market financial operation going on behind the scenes.

Outraged, she contacted first the banking regulators, then the press. When her concerns fell on deaf ears, she contacted some buddies in the burgeoning rebel group — the Tupamaros.

There followed an armed raid on the bank, in which the rebels stole incriminating papers and ledgers detailing the fiscal shenanigans going on behind closed doors. They also, Topolanksy sheepishly admits, stole a bunch of cash to help fund the cause.

The evidence gathered in the raid helped lead to prosecutions of some high-level bankers. It also launched Topolansky’s clandestine career. She left her posh family and fled underground with the rebels.

“I decided to join in the political game,” she said. “But I had to go underground.”

Fact: She spent almost as long in prison as her husband 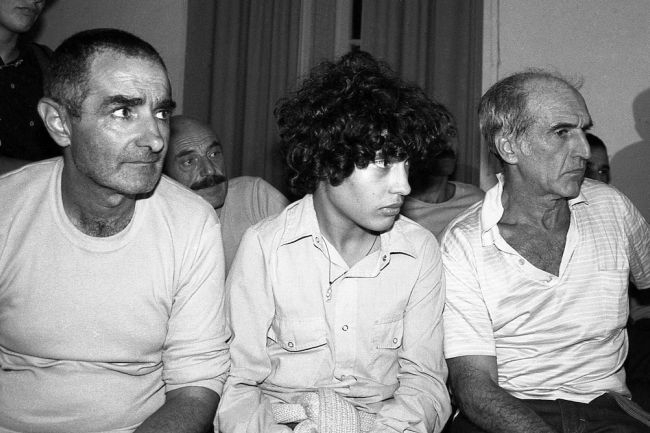 In prison, Topolansky was known as “La Tronca,” “The Tree Trunk.”

She served 13 stolid years behind bars as punishment for her involvement in the guerrilla movement. According to two fellow prisoners at the time, she served her time graciously and quietly, sticking to herself and remaining rigidly organized and unfalteringly militant.

Fact: She helped orchestrate two stunning jailbreaks, and escaped herself

There were several jail escapes in 1970s Uruguay. One of the most noteworthy was the July 30, 1971 freeing of 38 political prisoners from the Carcel de Cabildo, then the primary women’s prison in the country.

Nineteen years old at the time, and an admirer of Topolansky and the rest at the top of the Tupamaro pyramid, she was one of three-dozen women who crawled through excrement and acrid sewage fumes to a brief stint of safety above ground.

The jailbreak, which Topolansky helped engineer and execute, went off perfectly, Castera said.

Just after the first guard inspection, the prisoners slipped out of bed in the dormitory-style cell and stuffed dummies made of sheets and other linens under their blankets. Then they crawled — those with the harshest sentences at the front of the column — through the jail to a hole leading to a dark tunnel dug by comrades from the outside.

The women moved, sometimes crouching, sometimes crawling, through the filth and effluence of sewage pipes for 45 minutes until they reached another tunnel leading to a safe house. There they donned fresh clothes and shoes, escaping two or four at a time in waiting vehicles that spirited them out into the wet, green Uruguayan countryside.

A few months later, Castera and Topolansky were back in prison, where they spent years in close confinement.

Castera won’t hear a bad word said about her friend and ally. She’s honest, noble, and true to her philosophy, Castera said.

“Pepe and Lucía are the real deal,” she said of the president and first lady. “They’re not fakes.”

Fact: Topolansky, like her husband, lives frugally, even though she comes from money

One of the (possibly apocryphal) tales floating around Uruguay is that Topolansky’s original family home had the first indoor toilet in the country.

Certainly, the first lady comes from a privileged background. She attended the best schools and, until Uruguay’s descent into dictatorship, studied architecture at a first-rate college.

These days, she lives on a ramshackle flower farm with a three-legged dog.

President Mujica is often lauded for his austere lifestyle. He refuses to live in the presidential palace, and reportedly gives away 90 percent of his monthly government salary of around $12,000 to social programs.

His wife similarly shunned a materialistic existence from a young age. She’s simply not interested in wealth, she says, and she hopes to set an example for her country, and possibly the rest of the world.

Fact: She serves as a senator, even though she’s the first lady

Topolansky isn’t just support for her husband. She’s also an active member of the Uruguayan upper house of government.

For a couple of days in 2010, Topolansky — the leader of the majority party in the senate — actually served as the first female president of Uruguay, when both her husband and the vice-president were out of the country.

Fact: She doesn’t like to talk about certain elements of her past, or future

Topolansky doesn’t talk in great detail about her times as a Tupamaro activist. Rumors have circulated for years that she was one of the rebel group’s top marksmen.

But in three recent interviews, all she would divulge about her militant past was her involvement in armed robberies.

“She doesn’t talk about that, even with us, her closest friends,” Cristina Fynn, an old acquaintance of Topolansky’s who now leads a national housing agency, said of the legendary guerilla.

Nor does the first lady want to talk about a possible future run for president.

She’s not running in the 2015 general election, in which she is supporting former President Tabare Vasquez as he seeks to regain the presidency. But when I put the question to her about the future, she sidestepped it, talking vaguely of her advanced age and aversion to the public’s glare.

Whatever happens, she said, she intends to keep up her public work.

“I’ve always been a fighter,” she said. “I don’t always have to fight inside the legislative palace, but I will always find a way to fight, and Pepe feels the same.”

More from GlobalPost: 8 reasons Uruguay's not all that

Clarification: An earlier version of this story contained an unclear statement about the timing of Uruguay's dictatorship, which lasted from 1973 to 1985. President Jose Mujica was active in the Tupamaro movement during the 1960s, but was already imprisoned by the time of the country's 1973 coup d'etat.