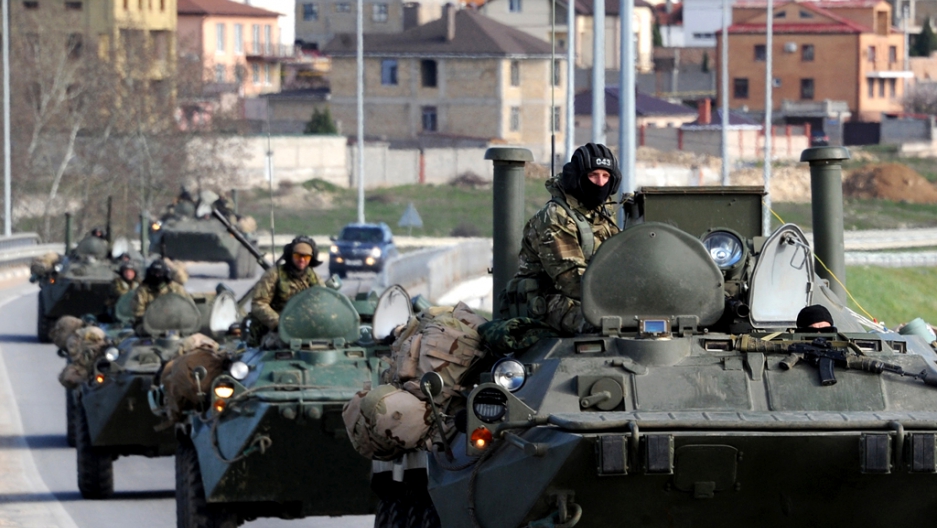 Before US President Barack Obama flew to Saudi Arabia on Friday, he spoke to CBS News in Rome about his concerns regarding Russia.

Obama said, "I think it's well known and well acknowledged that you've seen a range of troops massing along that border under the guise of military exercises," referring to the presence of Russian troops near the border it shares with Ukraine.

"It may simply be an effort to intimidate Ukraine," Obama said. "It may be that they've got additional plans."

He urged Russia to de-escalate the situation by moving its troops away from the border with Ukraine and talking directly with Ukraine's interim government.

Although Russia's defense minister reassured his US counterpart that Russia has no plans to move further into Ukraine, fears of a Russian invasion persist.

"The force that is at the Ukrainian border now to the east is very, very sizable and very, very ready," said NATO's Supreme Allied Commander, Gen. Philip Breedlove.

More from GlobalPost: Ukraine’s next headache

US officials told CNN on Thursday that Russia may have up to 40,000 troops near the border it shares with Ukraine. A spokesman for Ukraine's Council of National Security and Defense gave CNN a much higher estimate of 80,000 troops, based on government figures.

"You would have thought that after a couple of decades that there'd be an awareness on the part of any Russian leader that the path forward is not to revert back to the kinds of practices that you know, were so prevalent during the Cold War," Obama said, referring to Russian President Vladimir Putin.

Meanwhile, Interfax news agency quoted a senior Russian security official as saying to Putin during a Kremlin ceremony, "There has been a sharp increase in external threats to the state."

"The lawful desire of the peoples of Crimea and eastern Ukrainian regions is causing hysteria in the United States and its allies," Alexander Malevany, the deputy head of Russia's Federal Security Service, was quoted as saying.

More from GlobalPost: The stabbing of a pro-Ukraine supporter in Donetsk has forced the movement off the streets

GlobalPost Senior Correspondent Dan Peleschuk was in a part of eastern Ukraine that's thought to be especially vulnerable to any potential Russian advance: Donetsk.

"Despite recent fears that Russia would move into eastern Ukraine after annexing Crimea, the atmosphere in Donetsk — a bastion of industry and the center of ousted pro-Russian President Viktor Yanukovych’s support base — is not exactly insurrectionary."

"After last weekend’s mass rally against the new Kyiv authorities, whom many here believe seized power in a 'fascist' coup, a post-revolutionary calm has settled over the city’s wide, Soviet-era boulevards and tree-lined streets."

While it seems unlikely that a Russian invasion would provoke a military response from NATO or the United States, all eyes remain on Ukraine's border with Russia.

Watch an excerpt from CBS' interview with Obama, which will air in its entirety later on Friday: