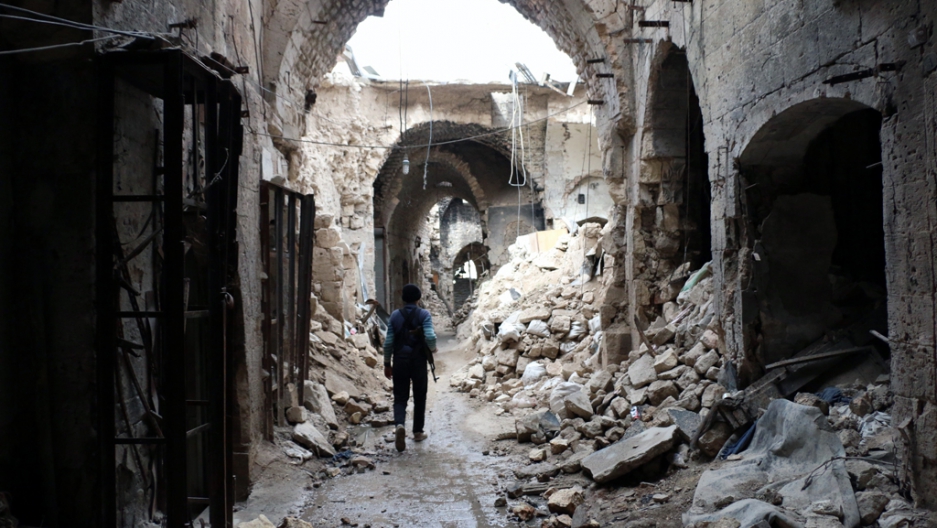 A rebel fighter walks in a devastated alley of Aleppo's old market, in the UNESCO-listed northern Syrian city on February 27, 2014. Some 3,300 people have been killed in fighting between rebels seeking President Bashar al-Assad's ouster and their erstwhile jihadist allies since clashes erupted in January, a monitoring group said on february 26, 2014. AFP PHOTO / AMC / ZEIN AL-RIFAI (Photo credit should read ZEIN AL-RIFAI/AFP/Getty Images)
Credit: AFP
Share
#map-canvas { width:670px; height:800px; } .layer-wizard-search-label { font-family: sans-serif };
A report released by the non-profit Global Heritage Fund catalogued some of the damage done to these sites, as well as other damage done to national heritage sites and archeological sites. Using this, along with other news reports, we created the interactive map below to show you give you a glimpse of some of the ancient treasures that have been permanently damaged.

Damages are represented by the dots, divided into three categories, the number in parenthesis shows total cases reported.

Shelling: Many Syrian rebels and civilians have taken refuge in ancient buildings. Shelling refers to damages to sites from air strikes, bombings, heavy gunfire, or violent searches by the military.

Looting: Syrian museums and archeological sites house relics from the earliest cities, Ebla, the Crusades, Islamic conquerors, and many other important periods of human history. Looters, local and foreign, have stolen many artifacts and damaged sites in the process.

Military Occupation: Armed forces have set up encampments, often damaging the sites in the process. Tanks have rolled onto fragile archeological dig sites and medieval walls have been torn down to make room for military construction.

Click on a pin for more information on a site. Source Links show the original place where the damage was reported. Many include YouTube videos shot by activist detailing the damage done to specific sites. Click on photos to see an enlarged version.

Make sure you zoom into the areas around the yellow pins to see specific damages done to heritage sites (Aleppo, for example, has five reported incidents).