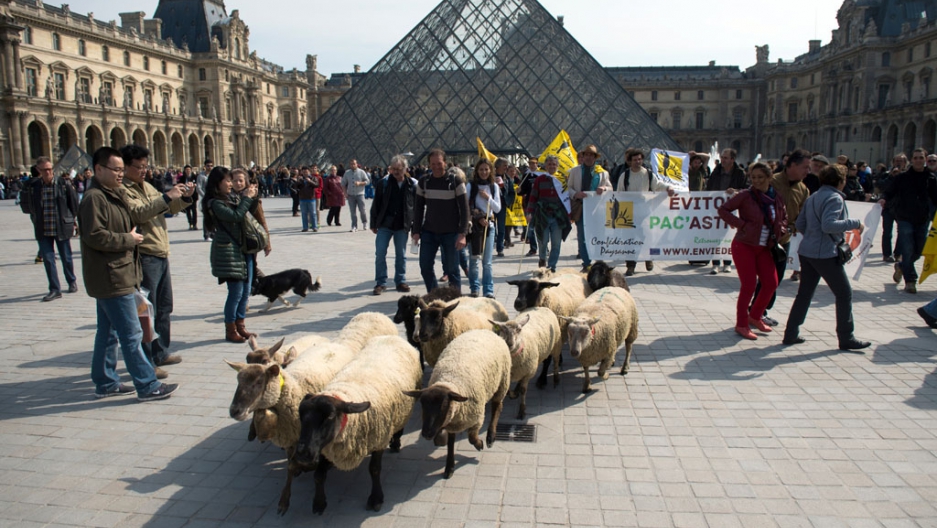 Tourists take photos as French farmers of the Farmers Confederation demonstrate with a flock of sheep outside the Louvre museum on March 28, 2014, in Paris.
Credit: MARTIN BUREAU
Share

Viewing some of the world’s greatest masterpieces in the Louvre shouldn’t be missed, but sometimes it feels like you’re just one of the herd.

Anyone hoping for a “selfie” with the Mona Lisa had to compete with about a dozen sheep crashing the party in an agricultural dispute outside (and inside) the gallery, the Associated Press reported.

Yes, the sheep, a sheepdog and shepherds descended on the world-famous museum in Paris to protest a European Union agricultural policy change.

The farmers drove their flock down the steps of the Louvre’s famous glass pyramid entrance through museum doors.

As part of the Farmers Union, they are angry about subsidy cuts being proposed they say will hurt small producers, The Telegraph said.

“What we have today is the Agriculture minister pursuing policies that marginalize farmers and will destroy them,” Farmers Union representative Laurent Pinatel told Agence France-Presse.

“We have come to say that our place is not in a museum, where they’d like to put us, but in the countryside, giving it new energy, create jobs and produce quality goods. That’s what we're here for today.”

“We are in the middle of a very violent restructuring of the farming world because they are applying exactly the same laws as for the rest of the economy, so we’re on the path to destruction,” Jean-Emile Sanchez told reporters.

Thankfully, nobody was hurt during the protest, by shear luck no doubt.