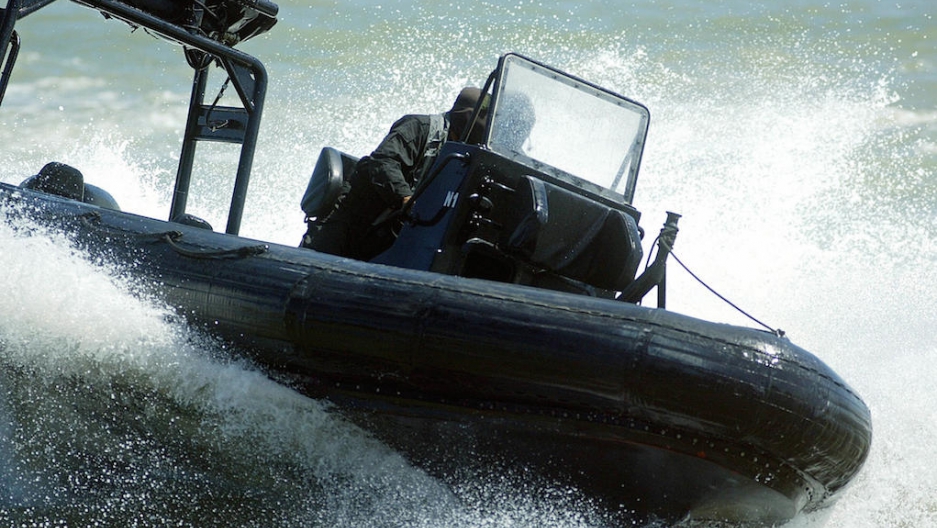 Malaysian special forces perform boat handling skills during an anti-piracy demonstration in the Straits of Malacca in 2004. For centuries, the 550 mile waterway has been a piracy hotspot. It has reclaimed its status as the world's worst piracy locale from Somalia.
Credit: Jimin Lai
Share

Editor's note: This story was originally published on March 27, 2014.

BANGKOK — Maybe God has a soft spot for pirates. That would explain the Strait of Malacca, a natural paradise for seafaring bandits.

Imagine an aquatic highway flowing between two marshy coasts. One shoreline belongs to Malaysia, the other to Indonesia. Each offers a maze of jungly hideaways: inlets and coves that favor pirates’ stealth vessels over slow, hulking ships.

It’s a narrow route running 550 miles, roughly the distance between Miami and Jamaica. This bottleneck is plied by one-third of the world’s shipping trade. That’s 50,000 ships per year — ferrying everything from iPads to Reeboks to half the planet’s oil exports.

The world’s fascination with neo-piracy now centers on Somalia. Thanks to the 2013 thriller “Captain Phillips,” in which Tom Hanks plays a cargo ship captain abducted by Somalis, even US teenagers know the anarchy-prone African state is a breeding ground for pirates.

At least it was. In truth, Hollywood stumbled onto Somalia’s piracy phenomenon rather late. In the last three years, pirate strikes in Somali waters have plummeted 95 percent to a meager seven incidents in 2013; none were successful.

Piracy in Southeast Asia, meanwhile, is accelerating. Attacks and attempted attacks in the waters of Indonesia — which controls much of the Malacca Strait and its environs — totaled 107 last year. That’s a 700 percent increase in just five years.

The German insurance firm Allianz, which released these figures in a new report, is now sounding a warning: Southeast Asian piracy must be reined in before it’s too late.

The attacks mostly amount to “opportunistic thefts carried out by small bands,” according to Allianz, but these syndicates could potentially “escalate into a more organized piracy model.”

None of this would surprise 18th-century European spice traders. They lived in terror of Malacca Strait pirates who staged bloody ship raids — all from the same shores cargo ships chug past today.

Piracy has long transfixed locals “born to the hard and dreary life of the fisherman,” writes historian Donald B. Freeman in the 2003 book “Straits of Malacca: Gateway or Gauntlet?”

A pirate’s life, Freeman wrote, was traditionally viewed in the region as a “passport to adventure, riches and prestige rather than a criminal occupation.” This tradition, paired with the pirate-friendly terrain, “helped give the region a reputation that made merchants and legitimate seafarers tremble at the very thought of traversing the strait.”

Modern-day captains plying risky waters look to a guide called the BMP. Based on intel from Western navies and shipping firms, it offers tactics on avoiding pirates and — if that doesn’t work — fending them off and surviving abduction.

The guide’s best advice? Go really fast. No pirates have ever boarded a ship pushing 18 knots, or nearly 21 miles per hour, the guide says.

But that’s practically impossible in the Strait of Malacca.

The channel is simply too crowded and too shallow. Gigantic vessels are instead forced to churn through at slow speeds that invite pirates in fast-moving skiffs. (To save fuel, today’s cargo ships often travel at about 14 miles per hour. That’s slower than 19th-century sail boats.)

Indonesian pirates typically have different tactics from their Somali counterparts, who’ve made headlines by invading vessels and demanding multimillion-dollar ransoms.

In the Malacca Strait, pirates like to get in and get out. Their “modus operandi isn’t to kidnap,” according to Tim Donney, an Allianz marine risk consultant. “These pirates just want the cash aboard the vessel or to rob the crew of any valuables.”

In 2005, piracy in the Malacca Strait grew so rampant that Lloyd’s of London, a prestigious insurer, declared it a “war zone.” Regional militaries of Singapore, Malaysia and Indonesia responded by upping warship patrols in the strait.

But pirates have simply shifted into distant island chains beyond the strait’s exit along the route to China.

Indonesia isn’t nearly as lawless as Somalia. But both are coastal nations where poverty is rife and police are ill-equipped. Both also happen to be situated on routes trafficked by   wealthy nations’ trade vessels.

“Most piracy takes place in areas where people are poor. Their livelihood has been taken from them by globalization, civil unrest or war,” writes Nigel Cawthorne, author of the book “Pirates of the 21st Century.”

Somali pirates also forced the shipping industry to get creative. They’ve come up with effective pirate-proofing techniques that could be applied to more ships entering the Malacca Strait. The BMP recommends blasting approaching pirates with hot water, ringing ships with razor wire and even installing electric fencing. Discharging foam, according to the manual, is “effective as it is disorientating and very slippery.”

Piracy poses no existential threat to the shipping industry. Considering the volume of international trade, losses from piracy “amount to little more than a rounding error,” according to piracy analyst Martin N. Murphy. But the “sense of disorder” created by piracy, he writes, “may be hard to calculate in dollars.”

Piracy along the Malacca Strait route should be easier to fight than in Somalia. All of the nations patrolling the strait have functioning governments, committed to fighting the problem, and are financially incentivized to maintain a bandit-free trade route.

Piracy’s historical influence here is legendary. In the 1820s, the Dutch and British empires drew a line in the sea and agreed to hunt down pirates on their respective sides; that line went on to become the modern-day border between Malaysia and Indonesia. The word “boogeyman” is also inspired by fearsome pirates from an ethnic group in Indonesia known as the Bugis.

Taking a longer view of history, the rise and fall of Somalia’s piracy may eventually be seen as a blip — a brief aberration from the traditional order in which the Malacca Strait area is the world’s top piracy zone.