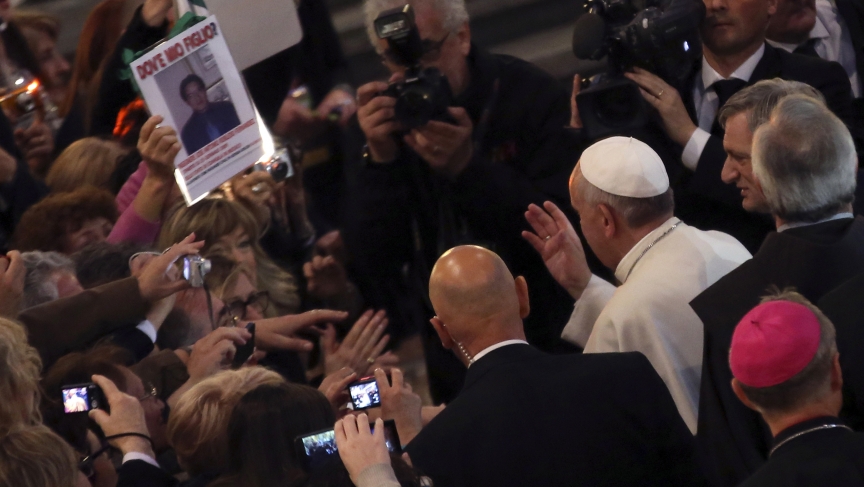 Pope Francis waves to faithful as he arrives to lead an audience with the family members of victims of the mafia at the San Gregorio VII church in Rome. A woman shows a picture of her son with the words, "Where is my son?"

The relationship between the Vatican and Italy's mafia has often been surprisingly close.

"In Sicily, there have certainly been priests who have been ‘men of honor’ — members of the mafia," explains John Dickie, professor of Italian Studies at University College London. "And local priests were all too happy to allow the local mafia boss to walk in the front row of the parade on the saint’s day."

Dickie, whose latest book on the mafia is Blood Brotherhoods, says that this toleration helped the mafia’s public image enormously. "Essentially, they borrowed the church’s legitimacy — to wrap itself in the church’s clothes."

So last week, when Pope Francis met the families of Italian mafia victims for a prayer vigil, he was making a clear statement. He openly denounced the mafia and its role in Italian society. He said to those in organized crime, "Please change your lives. Convert yourselves. Stop doing evil."

And that was significant. According to Dickie, the Catholic Church even refused to acknowledge the existence of the mafia until relatively recently.

"The Church is trying to make up for lost time," he says. "For the last 150 years, the Church was notable for its silence and even complicity with the power of organised crime."

In the 20th century, the mafia and the Catholic Church shared a hostility to communism, while the Vatican also remained suspicious of the very existence of the Italian judicial system. And Dickie believes that the relationship between the church and the mafia was even stronger at the local level.

Organized criminals have always seen themselves as observant Catholics. Dickie remembers visiting mafia "bunkers" in Sicily — underground command centers intended to allow senior mafia figures to hide from the police. "In absolutely every case, when police discover these bunkers, there are religious statues, there are bibles, and religious texts," he says. "Mafia bosses are religious."

So maybe they might listen to the pope. At last week's prayer service for the mafia's victims, Pope Francis spoke directly to members of the mafia: "There's still time to not end up in hell, which is what awaits you if you continue on this path."