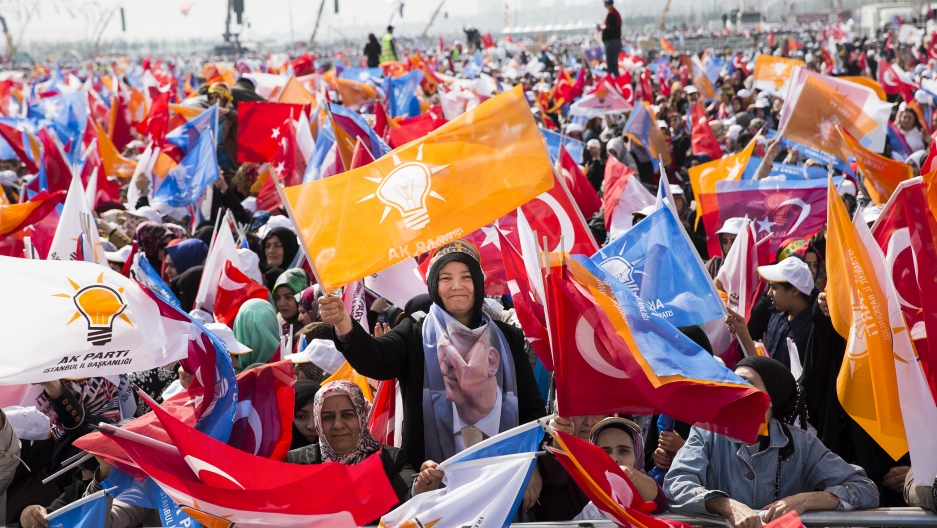 AK Party supporters during a campaign rally in Istanbul. The AKP, Prime Minister Erdogan's Justice and Development Party, organized the rally ahead of municipal elections.

On Sunday, Turkish citizens will vote for their local government officials. Much like in the US, major cities such as Istanbul and Ankara are battlegrounds for opposing political parties.

But unlike in the US, campaigns here sound different.

“People hear a van passing by blasting ‘RECEP TAYYIP ERDOĞAN…’ and that reminds the AKP electorate, for example, that ‘I need to support my leader Tayyip Erdoğan,’” says Mehmet Ali Tuğtan, a professor of political science at Istanbul’s Bilgi University. He says songs, like the one for Prime Minister Erdoğan and his ruling Justice and Development Party (AKP), are a cheap, effective way to get attention.

The song tells the tale of a leader loved by millions, trusted by his people and a nightmare to his enemies. The lyrics play on Erdoğan's image as a tough, no-nonsense leader.

Uğur Işılak, a famous musician in Turkey and a long-time fan of the prime minister, wrote the lyrics to the Erdoğan Dombra. It's set to the tune of one of Turkey’s most famous marching songs.

Işılak insists that recent alleged leaks of phone calls linking Erdoğan to corruption are fake. He wants to show that Turkey stands by its leader. “That’s why [the song] had to be about Erdoğan,” Işılak says, “all eyes are on him, everyone’s going after him, not the party.”

Other parties are singing a different tune. Take the main opposition, known as the CHP. In a viral YouTube campaign, CHP candidates sing a song that says, essentially, “Can’t we all get along?” It’s a cute video and a happy tune, with no mention of the party’s leader.

“By their choice of the song, they are also giving a message: We are peaceful … we are [appealing] to the general society,” Tuğtan explains.

These examples of how political parties in Turkey rally their base are from two of the largest factions. Turkey has dozens of political parties and most have songs. One Kurdish party’s song refers to the Kurds — and the opposition in general — as coming out of the shadows.

The National Movement Party is pushing a rap song called, “Raise Your Voice,” which rattles off a list of the government’s ills.

Comparing the Turkish style of campaigning with what Americans are used to, Tuğtan chuckles. “Can you imagine an Obama van!? … [But] for the Turkish audience, it’s very normal.”

Tuğtan says one thing is similar about US and Turkish campaigns. Just like the incessant TV ads in the US, Turkish jingles aren’t likely to change any votes —but they do help energize the electorate.