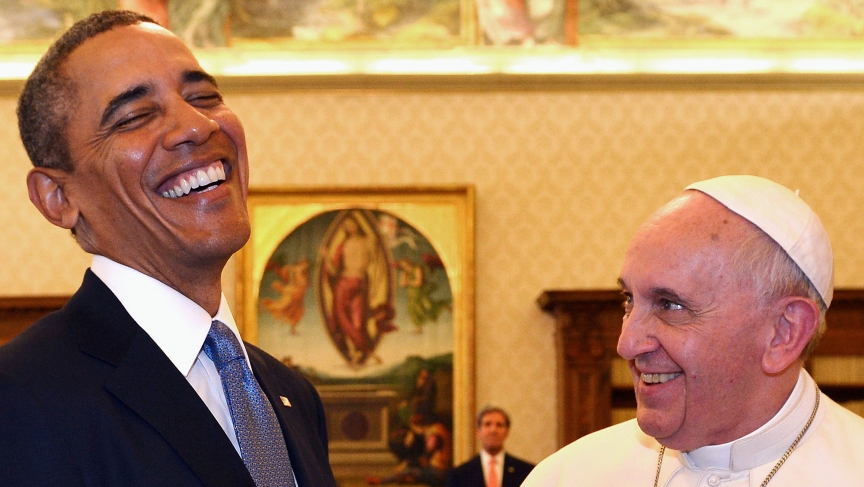 Pope Francis and President Barack Obama enjoying each other's company during their meeting Thursday in the Vatican.

After several days of tough diplomacy in Europe over how to deal with Russia, President Barack Obama had a more relaxed meeting Thursday with the pope.

The two men joked as they greeted each other at the Vatican. Talking about the pomp and ceremony, the president said "His Holiness is the only person who has to put up with more protocol than me."

Later, Obama described the meeting as a "great honor" and confessed to being "a great admirer" of Pope Francis. They exchanged gifts before heading into almost an hour of talks behind the closed, gilded doors of the Apostolic Palace library.

“Like people around the world,” the president said, “I’ve been incredibly moved by his compassion, his message of inclusion. I was grateful to have the opportunity to speak with him about the responsibilities we all share to care for the least of these: the poor, the excluded.”

American presidents routinely meet with popes while they’re visiting Europe, but there may have been an additional incentive for this meeting.

“Pope Francis of course is probably the world’s most popular leader right now,” says Jane Little, a reporter who specializes in religious affairs. President Obama, she point out, is down in the polls right now. “I’m sure his advisers would say this might actually have some nice political brownie points in it, to meet this hugely popular leader. So (they’re) hoping perhaps to bask in some reflected glory.”

But it wasn’t just a cynical, political move, argues Little.

“The expression of warmth was genuine,” she says. They share many values, and both symbolize the triumph of outsiders: the first president of color and the first pope from the Americas.

The two leaders also discussed two domestic US issues, according to Obama.

One was immigration: many of the two million undocumented people deported by the Obama administration are from Catholic countries in Latin America. The other issue was the battle over the inclusion of contraception coverage in the Affordable Care Act — something US bishops had lobbied the Vatican to bring up.

For the pope, the meeting gave him a platform to share his vision with the most powerful non-religious leader in the world.

“The Pope wants this president, who has spoken out on behalf of the middle class, to go even further and speak not [just on] behalf of the poor. Not just America’s poor, but the world’s poor. And to do something about it,” Little says.

“I think there’s a sense there that they might be fellow travellers of a sort,” she adds, “that they do both care about economic injustice, and that they do want to do something about the inequality gap.”