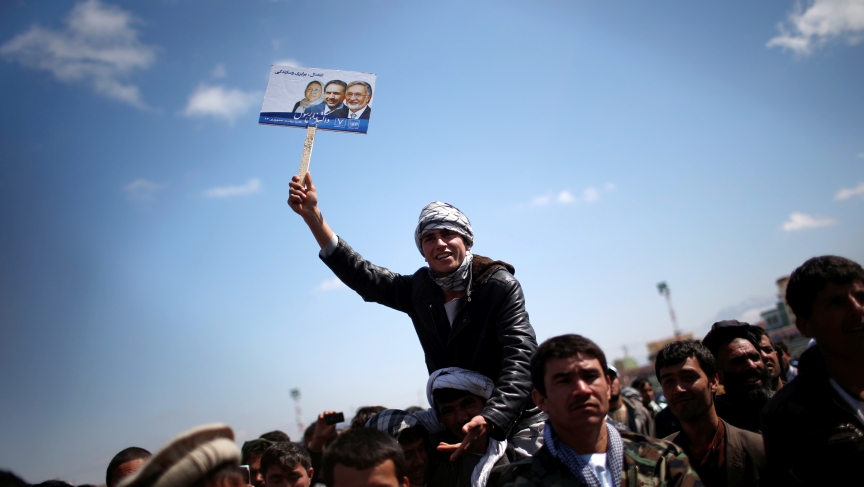 Afghanistan holds its presidential election in about a week, and the Taliban's violent campaign to disrupt the vote is well underway. Yet many Afghans are upbeat about the election and the future of their country after 2014, when most US and international troops are expected to be gone.

PRI's The World's host Marco Werman talked with Faiysal AliKhan, who spent the last month in Afghanistan and is a fellow with the New America Foundation in Washington, DC.

You were traveling to different parts of Afghanistan, talking with people. What were they telling you about the upcoming election?

There was a lot of excitement, whether it was youth that was very involved or people in the administration, local people. There was a lot of activity going on. It was sort of center stage. I think it's something that's sprung everyone back into hope and they're looking towards a better future for themselves.

Are people scared for their safety with all the violence going on?

People are very cautious. But, in Afghanistan, the feeling that people have towards elections is that there is an expectation about a certain amount of violence that's always taken place historically. I don't think it's as much of a shock to them as it may be to some of the foreign observers.

You spoke with a range of people and I'm curious to know about the difference between the attitudes toward the election in the cities, and then in the countryside. How are people seeing it differently?

In the cities, you have a lot of young, urbanized youth and people in government who've been part of what's happening during these last eight, ten years. Their vision of where they see the country going, or what the country is, or how they may see other places [in the country], is quite different. A lot of these younger people who dominate the media, who are interlocutors with foreign troops and diplomats, their vision is quite different from the people from the south.

When you go down into the [southern part of Afghanistan], because of the level of education, because of the tribal dynamic, because of so many other factors, there's a very different expectation. They see themselves as being somewhat removed from the center. But in both places, I must say, there was a fair level of enthusiasm [about the upcoming election]. People were excited. It also gives people something to look forward to, something to do, something positive, and something that unites people.

It sounds like there is also a 'youth-elder' split there. What will that mean in this election? And what are the concerns of the youth?

The intergenerational aspect to this conflict is something that's really never been addressed. There's no suicide bomber over 20 years old. There are hardly any militant commanders — or Taliban leaders — who are 25 years old or so. There are no tribal leaders who are less 50, 60, 70, and, in this culture, they don't really engage with younger people or allow them to become part of the public debate.

So, it's really these anti-state groups, and militant groups, which help shape perception or interpret events for younger people. For younger people in the larger cities like Mazar, Herat, Jalalabad and Kabul, they are engaging with candidates. There is a young group called the "Afghan 1400," a young political group that's emerging. There are other groups looking for transparency and looking for the youth mandate.

Do the elder, tribal leaders in Afghanistan show frustration with all these years of US occupation and violence, and are now ready to go with whoever is going to promise some kind of peace? Even if that means electing someone who is essentially "Taliban light?"

One thing to understand is that, in parts of the country, there is a shadow government. That is particularly true in the south, where there has never been [much] reach from Kabul. I always look at Afghanistan as these 25,000 village-states, which are part of a tribal confederacy that we all collectively refer to as "Afghanistan." Outside of the major cities, there is a completely different dynamic. A lot of the attention and expertise is more regional, as opposed to national. So, yes, there is frustration among some people who feel they have been left out of power. In other places, there are people who have been in power, and they are looking for ways to hang on. It really varies depending on what district you're in.

Are there any Taliban candidates running for office?

The Taliban have boycotted this election and this political process. They feel it is not legitimate if there is still a presence of foreign troops [in Afghanistan.] They feel that this is a puppet government. That's been their theme. So, they haven't participated and they have no candidates. However, there are some extreme right-wing candidates, like the Hezb-e-Islami, Gulbuddin Hekmatyar, group. They have a candidate. There is another gentleman who is very anti-Taliban, Abdul Rasul Sayaf. He is probably the most vocal against the Taliban. But he was the man that invited Osama Bin Laden to Afghanistan. So, you have people like this former mujahideen who are participating in the election.

The last election in Afghanistan was riddled with fraud and irregularities. Are Afghans confident that this election is going to be different?

This is a major worry for people, more than the violence and more than anything else. For the first election [in Afghanistan,] I think there were 2,500 election observers. In the next, there were about 5,000. In the last one, about 7,500. And in this election, there is going to be 10,000. I met with the election commissioner. I also met with independent election observers and some of the local organizations. They seem to have learned some lessons from the past.

But one of the dangers is always when you are moving ballots from the cities out to polling stations and then back. That in-between time, in some of the more remote areas, is something that people are concerned about. However, I don't think it's in anyone's interest to have massive fraud, because that could lead to violence. It's not something that would benefit any of the candidates.

What about the US troop withdrawal planned for the end of this year? It's possible that there will be no international forces in Afghanistan after that. How is that going over with people?

For some people, it's worrying them a lot. They feel that without support from US troops, everything might fall apart. There are other people who are very concerned for other reasons, because a large part of the Afghan economy is dependent on the troops staying. That's another side.

I came across some people in the military who felt that the Afghan national forces have developed the competence and the structures, the intelligence, to allow for a smaller footprint of internationals to be there [in Afghanistan.] I think that, frankly, prolonging this donor culture, it forces an alternative to a domestic economy. And keeping such a large [foreign] army — it's been over a decade now — it might just be counterproductive.

Do you think some Afghans might vote based on how the status of forces agreement with the US shakes out?

I think all of the candidates have indicated that they would sign the BSA [Bi-lateral Strategic Agreement]. President [Hamid] Karzi perhaps is not doing so because he is going anyway, and it guarantees some amount of safety for him to stay in the country and remain somewhat involved. At least he can say, 'Well, it wasn't me that decided this.'

Faiysal, you're from Pakistan and many Afghans, as you know, accuse Pakistan of providing a safe haven for some of the militants who carry out attacks in Afghanistan. That must have made for some interesting conversations when you were there?

I'd never felt this sort of anti-Pakistan sentiment before in any place that I'd visited, particularly amongst urbanized youth in Kabul, where it was stronger than the rural places I visited. Some of my movement was restricted — not so much for security concerns that I felt — but it was because people were not willing to associate with me or be seen with me.

People that I knew well, particularly those involved in politics, said, "Look, the last [thing] we need is to be seen with a Pakistani trailing around with us and for people to draw conclusions about us being supported [by Pakistan.]" There is a lot of animosity. But when you get under the surface, you find that it is directed at the government or the state, as opposed to the people. It's almost like they need time to berate you, and then they sort of calm down.

What kind of confidence does that give you about the future of Afghanistan, regardless of who becomes the next president?

I think it really is a challenging relationship, because there really is very little people-to-people interaction. There have been trips by the Afghan Parliament to Pakistan. But on the civilian side, we don't have any correspondents there from [Pakistani] media. We have over 80 [television] private channels. They have about 50 channels, and there is no [Afghan] correspondent [in Pakistan.] There is very little we know about each other on a people-to-people basis.

In terms of a future, unless we have a relationship based on equality and respect for the sovereignty of both countries, and we look to each other within a state-to-state relationship, and build more people-to-people ties, it's going to be a real challenge for both of us. For Pakistan at the moment, we have our own existential threat from these anti-state movements in our country. It's a matter of our survival. So, I think there is a common theme that we have between the two countries. I foresee that there will be a positive future because of some of the common problems that we face.