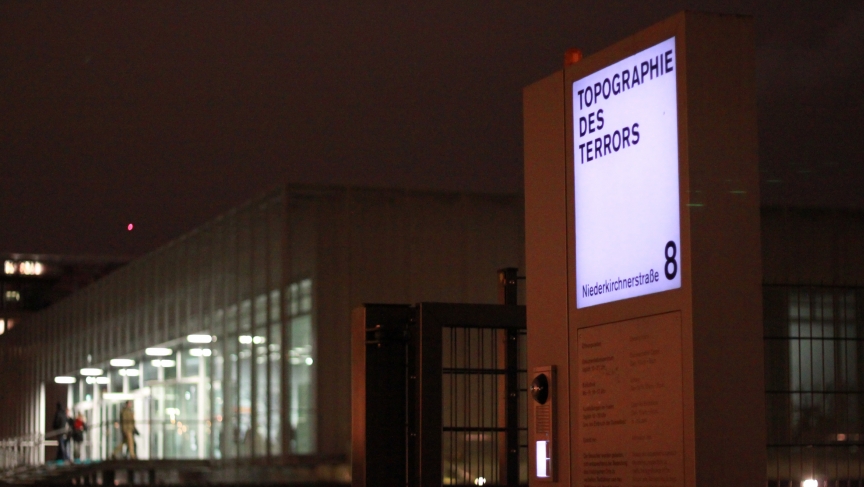 The Topography of Terror museum sits on the former site of the SS and Gestapo headquarters.

The building in Berlin that housed the Gestapo and SS headquarters has been nearly erased. It was bombed by Allied fighters and its ruins were later razed.

In its place today stands the Topography of Terror — a museum that meticulously documents the atrocities Nazis planned and executed on those very grounds.

Inside the museum, though, something else has been erased.

A section of the exhibit, called “The Persecution of Homosexuals,” features images of letters typewritten by ordinary German citizens — a neighbor, a trade union official — reporting suspected gay men to the Nazi police. Look closely at the display, as I did on a recent visit, and you’ll notice that the museum has blotted out the last names and addresses of the accused men. They are only identified as Heinz M and Arthur L and “the homosexual tailor, K.”

Why hide their names?

“We decided to anonymize the names of the homosexuals to protect their privacy,” wrote Andreas Sander, who curated that section of the exhibit, in an email. “Not every homosexual wants his homosexuality to be made public. I think we have to respect this.”

But there were no specific requests by family members to conceal their names, Sander said. For "similar social reasons," the exhibit also conceals the names of those deemed by the Nazis to be “asocial elements." Sander said that is also in accordance with data privacy regulations enforced by the Berlin city archive, which provided most of the documents and photos.

The censorship surprised me. In other memorials and exhibits that depict the horrors of the Nazis, the names of victims — particularly Jewish victims — are prominently displayed. For Israel’s Holocaust museum, Yad Vashem, collecting and publicizing the names of the six million Jewish victims is at the core of its mission. The names themselves serve to bear witness to the atrocities and the loss.

Could covering up the names of gays persecuted by the Nazis unwittingly send an entirely opposite message — that being singled out by the Nazis for being gay is an embarrassment still worth hiding?

“There is still a reluctance by people and institutions to identify homosexuals. This, to my mind, is unfortunate,” said Yehuda Bauer, a Holocaust historian at Yad Vashem.

The Nazis convicted about 60,000 men for homosexual activity or solicitation, offenses punishable by imprisonment. Scholars estimate that between 5,000 and 15,000 men targeted as gay were interned in concentration camps. There was a difference between the Nazis’ targeting of Jews and their targeting of gays. Gays were persecuted on an individual basis, unlike the community-focused and systematic persecution of Jews.

But in concentration camps, gay prisoners wore pink triangles on their uniforms and were almost at the bottom of the prisoner hierarchy, second only to Jews. Historians say there were instances of gay prisoners and their pink triangles being used by Nazi guards for target practice.

Many German museums, though not all, conceal the names of victims targeted for being homosexual, said Erik Jensen, an expert on gays and the Nazi regime at Miami University of Ohio. And there are many reasons for the censorship.

Germany is uber-sensitive about privacy — a sensitivity shaped by the trauma of Gestapo, and later East German Stasi, surveillance. The country has strict laws on data protection, preventing the publication of people’s personal data for decades.

But it’s more than that. Many of the men incarcerated on charges of homosexuality actually had to continue their incarceration even after the fall of the Nazi regime. The Nazi legal code that criminalized homosexual activity and the perception of homosexual solicitation remained in effect in West Germany after its founding in 1949 until 1969.

“The continued criminalization of homosexuality made almost all of the men whom the Nazis had persecuted understandably reluctant to talk about their experiences at all to anyone,” said Jensen. “As a result, we simply know far less about these men's experiences and even identities than we do about the survivors of other victim groups.”

From 1945 until 1969, about 50,000 men were sentenced to prison terms under the law criminalizing homosexuality. Some of these men committed suicide, said Jensen. Only in the early 1970s was a first-hand account published by a man targeted by the Nazis as being gay. That account was published under a pseudonym.

Another reason for the discretion in publically naming gay victims is that some of these targeted men might not actually have been gay. It was not unheard of for people in Nazi Germany to target their longstanding rivals by making bogus accusations about them to the authorities. “Those denunciations might take the form of accusing someone of listening to the BBC, or of telling a joke against Hitler, or of ostensibly looking longingly at another man,” said Jensen.

Today, Germany is more than gay-friendly, and Berlin is one of the world’s most prominent gay havens. And there is great interest in the country when the names of gay victims do come out of the historical closet. In 2008, when it emerged that a man in France named Rudolf Brazda, who later died in 2011, was the last known living gay survivor of the Nazi persecution of homosexuals, Berlin’s openly gay mayor invited him to participate in the city’s gay pride parade.

And yet, shame surrounding the Nazis’ gay victims still exists.

“Sometimes [victims] were married, sometimes they had children, and the children don’t like to have had a gay father,” said Rudiger Lautmann, a leading German researcher on the persecution of gays under the Nazis.

Go back in history even before the Nazis, to Germany’s last imperial chancellor, Prince Max von Baden. Lautmann says his descendants “have not allowed professors of history to look into his family archives, even after more than 100 years.” Lautmann believes the reason is that “he was gay.”

A few years ago in Berlin, I met Petra Hörig, the daughter of Horst Hörig, a gay survivor of Sachsenhausen concentration camp. She said she feels entirely alone. Her father committed suicide in 1961. When I met her, she said she knew of only one other gay survivor in Germany who had children — but she said his children refused to speak with her about it.

At a recent event marking the liberation of her father’s concentration camp, Honig said a Jewish survivor of the camp asked her why she was attending.

“I told him my father had been persecuted as a homosexual. He was very astonished and afraid of it and ran away,” Honig said. “When his wife wanted to talk with me, he took her by her dress, away from me.”

There may well be other gay survivors still alive who have chosen not to reveal themselves.

When it comes to the censorship of victims’ names at the Topography of Terror museum, Jensen, the historian at Miami University, says he is sympathetic to the curators’ decision to cover up the names of Germans targeted by the Nazis under suspicion of being gay.

That censorship, he thinks, may end in the coming years, after the sensitivities of the survivors — and their next of kin — become a thing of the past.