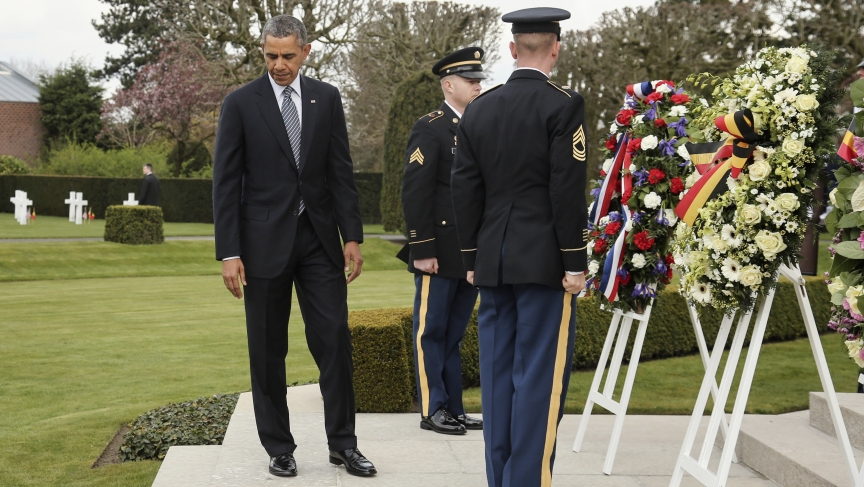 US President Barack Obama attends a wreath-laying ceremony at the Flanders Field American World War I Cemetery and Memorial in Waregem March 26, 2014.

During his visit to The Hague on Tuesday, President Barack Obama promised to use the US military to protect NATO nations against outside threats.

"That’s what NATO is all about," he explained. "When it comes to a potential military response, that is defined by NATO membership."

President Obama likely meant to reassure NATO members in close proximity to Russia, who have warily watched Russian President Vladimir Putin's actions in Crimea. Ukraine is not a member of NATO, but as Obama stated, "History has a funny way of moving in twists and turns, and not just in a straight line."

History also tends to repeat itself, as Margaret MacMillan knows well. MacMillan is an international professor of history at Oxford University and the author of "The War That Ended Peace: The Road to 1914." She reflects on the fateful summer of 1914 when World War I began — a period when European tensions regarding territory and ethnicity engulfed the continent.

"I think we get used to peace and we like to think it's a normal state of affairs," says MacMillan. "In Europe before 1914, they had an extraordinarily long period of peace, punctuated of course with short wars. They got used to the sense that peace was normal and they could get through the crises. Perhaps we've had something of the same since the end of the Cold War. Goodness knows there's been conflicts, but they haven't spilled over into much larger ones."

MacMillan says there's always been a tension between forces pushing for stability and opposing forces that may disrupt international stability. Nowadays, however, MacMillan says signs that stability may be rattled are much more apparent than in days past.

"I think we recognize, perhaps more clearly than we might have done in the 1990s, just how much people can be moved by passion — whether it's national passion, nationalism or religiously-inspired fervor," she says. "We're not always rational human beings, and we take very seriously the ways in which we identify ourselves."

MacMillan speculates that this type of intense national passion might actually be a result of globalization — as the world becomes more integrated, she says people tend to cling to their national and local identities as a way to stand out. In addition to national identity pushing forward disruption, MacMillan says there is another factor that can play a role: pure accident.

"I think we should never underestimate the sheer role of accident," she says. "In the last months of the crisis before Europe went to war, there was a series of very human mistakes — miscalculations, failures to understand what the other side might do. I think they could've avoided the accident, I don't think it had to happen," she argues.

"I think we have to hope today that we will have leaders who are wise enough, who are sensible enough not to move precipitously, who are prepared to try and understand the other side and prepared always to talk to the other side. I think we shouldn't be too pessimistic — we have a lot of goodwill in the world, a lot of sense that people want peace to continue. But I think we should really be careful because we should recognize that accidents do happen."

MacMillan says that President Obama is reminiscent of Britain's Prime Minister Neville Chamberlain in the years before World War II. She says that Chamberlain was "unfairly attacked as an appeaser," and now Obama is focusing on bringing different countries from the West together to act with a unified response.

"But it's not easy — until there is a very clear and pressing threat, we tend to always think of our own national interests," she says. "What Obama is doing, I think quite rightly, is signaling that there really is a concern about the way in which Russia is behaving, but [Obama is] trying to keep the door open to more negotiations and trying, I hope, to show the Russians that they really have to be careful not to go too far."

Though President Obama is trying to temper the Russians through a unified response, MacMillan says that the next steps are in the hands of President Putin, someone she describes as a "change agent" and "a passionate nationalist."

"He's someone who's been deeply humiliated, like many Russians have been, about what happened to the Soviet Union after the beginning of 1990s — the way it fell to pieces, the way Russia was left as a much smaller country with huge economic problems and much diminished influence internationally," says MacMillan.

While Obama might resemble Neville Chamberlin, when comparing 2014 to days past, MacMillan says there is no clear parallel to Putin — but he does resemble Kaiser Wilhelm II of Germany. Wilhelm, says MacMillan, felt that Germany was not getting the international recognition it deserved, something that President Putin currently feels about Russia.

MacMillan says that much of President Obama's first term was focused on Asia — something that she views as a mistake. In terms of alliances, trade, security and common interests, MacMillan says that Europe is hugely important and perhaps the US should have been paid more attention to it in recent years, despite the high international bets being placed in places like China.

"We tended to assume that Russia would just be content to just chug along as it was, sort of on the edge of Europe and not really all that important," she says. "I think that was a mistake. I think we failed to recognize the depth of the sense of humiliation in Russia, and it may be too late to do much about it now."

Her advice for the West? "I think what is important now is to have a strong and robust response to what is going on in Russia and make it clear to Putin that if he tries to move into Eastern Ukraine, that Russia will suffer consequences."