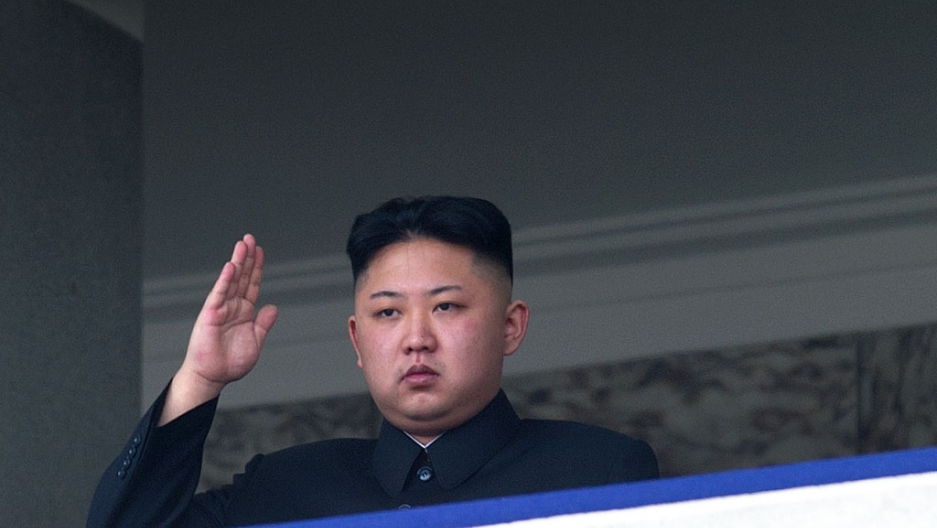 TO GO WITH Oly-2012-PRK,FEATURE (FILES) This file photo taken on April 15, 2012 shows North Korean leader Kim Jong-Un saluting as he watches a military parade to mark 100 years since the birth of the country's founder and his grandfather, Kim Il-Sung, in Pyongyang. He lacks the toned physique of an Olympian but "dear respected" leader Kim Jong-Un will be the inspiration when North Korea's athletes go for gold at the London Olympics. North Korea are aiming for a record number of medals in London in what would be a timely boost for Kim, the new face of the country's ruling dynasty and its all-pervasive personality cult. AFP PHOTO / FILES / Ed Jones (Photo credit should read Ed Jones/AFP/GettyImages)
Credit: Ed Jones
Share

Editor's note: This article has been updated to reflect the fact that the Workers' Party recommends all male students get the same haircut as Kim Jong Un.

This is incredible. Unless you're a North Korean student. With a weird shaped head.

As of two weeks ago, male students in North Korea are advised to get the "Dear Leader Kim Jong Un" haircut.

Picture them all looking more or less like the picture above. Short on the sides. Party on top. But a party with a lot of rules. And a curfew.

It's all the rage:

North Korea has had state-sanctioned haircuts for some time. There used to be 18 styles women were allowed to choose from and 10 for men.

Curiously, Kim Jong Un's 'do was not among the choices.

Well now choice is no longer among the haircuts. Mwahahahah.

Female students are also being advised to keep their hair as short as that of first lady Ri Sol Ju, according to Radio Free Asia.

The new recommendations from the ruling Workers' Party, which are being treated like a directive, first took root in the capital Pyongyang and are now rolling out across the country.

They are not to everyone's liking, mind you. One source told Radio Free Asia that the look just doesn't work for everyone.

"Our leader's haircut is very particular, if you will," the source said. "It doesn't always go with everyone since everyone has different face and head shapes."

Others say the haircut has unfortunate associations. "Until the mid-2000s, we called it the 'Chinese smuggler haircut'," a North Korean defector now living in China told the Korea Times.

None of the reported objections, curiously, pertain to the fact that Kim Jong Un is psycho enough to try and make everyone look like him.