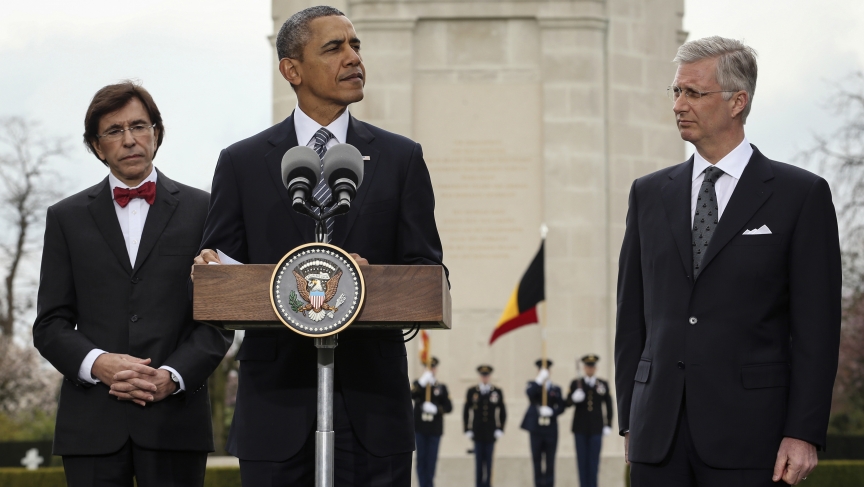 President Obama's trip to Europe this week has been all about Russia — and rallying European allies to form a united front against Moscow's annexation of Crimea.

During a visit to a US war cemetery in Belgium on Wednesday, Obama felt the need to remind Europeans that "freedom isn't free."  He urged them to reverse cuts in their national defense spending. He also warned Russia not to think about further annexation of territory. But it's been heavy going.

Judy Dempsey calls it "very nice rhetoric." She is a senior associate in Europe with the Carnegie Endowment for International Peace. “[He's] trying to rally the troops — literally. Trying to rally NATO to spend more on defense, and trying to rally the Europeans and strengthen their backbone when it comes to Russia.”

“But,” she adds, “I’m not sure this rhetoric will get far. Europeans have been united thus far, but they have not been as forceful as the United States has been when it comes to dealing with Putin.”

Despite the renewed emphasis on the importance of Europe, Washington is not pivoting back toward Europe, argues Dempsey. “America’s strategic interests are in the Asia-Pacific. There’s no doubt about this. Europe is too wealthy, too prosperous, too stable to justify a re-pivot,” she says.

Dempsey feels Obama needed to deliver a different message to Europeans . “What he should have said is, ‘Look, if you want the trans-Atlantic relationship to survive and prosper, [then] look after your own security. We will help you when needed, but look after your own defense spending, and where your interests are.’ And he didn’t say this.”