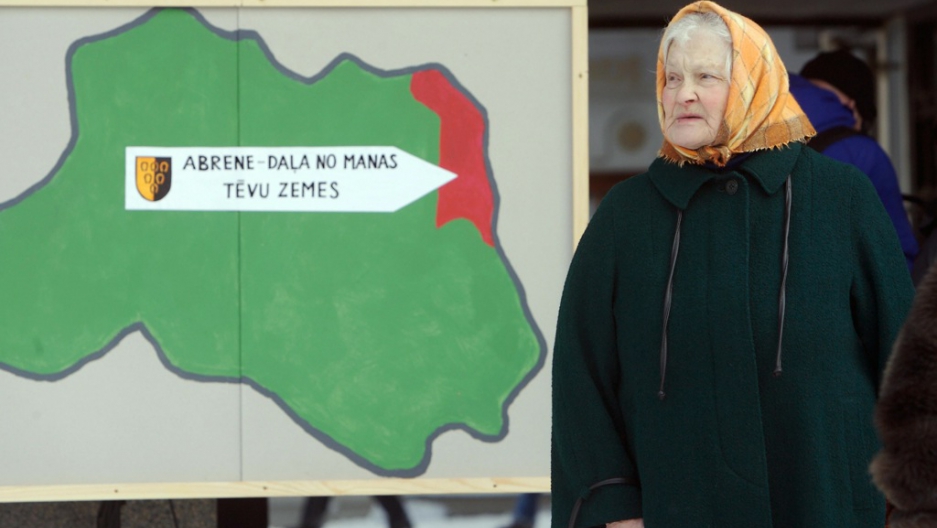 Riga, LATVIA: (FILES) A recent, undated file photo shows a woman protesting in Riga against a Latvian government project to sign Latvia-Russia border treaty. Placard reads: "Abrene (today Russia Pitalovo) is part of my fatherland." Russia and Latvia could sign a crucial border treaty within two weeks, after more than a decade of sparring between Moscow and the former Soviet republic, Moscow's envoy to the Baltic state said 02 February 2007. Inking the deal would end a deadlock, which has endured since the Baltic country regained its independence from the Soviet Union in 1991, almost five decades after it was annexed at the end of World War II. AFP PHOTO / ILMARS ZNOTINS (Photo credit should read ILMARS ZNOTINS/AFP/Getty Images)
Credit: ILMARS ZNOTINS
Share

The rise and fall of empires, two World Wars and the collapse of the Soviet Union mean the map of Europe has been redrawn more times than Russian President Vladimir Putin has posed shirtless. And anyone who claims they owned anywhere first would, if they were being entirely honest, probably have to admit that someone else got there before them.

That was Putin’s logic for the Russian annexation of Crimea. It used to be ours. Therefore it always was, therefore it still is.

Well, by the same token, several other countries could take bites out of Russia. The world’s largest country didn’t start off that way. Just like every other empire, it invaded, conquered, negotiated and seized the lands it now calls its own.

Some of those lands are fiercely disputed to this day, some are the subjects of uneasy settlements, and some have long ago been relinquished to Russia’s unchallenged control. But here’s a list of the most important Russian territories that other countries could, if they chose, try to claim back.

1. The Kuril Islands: Claimed by Japan

The Kuril Islands lie like stepping stones between northern Japan and southeast Russia — but far from linking the two countries, they divide them. Around a century and a half ago, Japan and Russia signed a treaty establishing Japanese ownership of the four southernmost islands, and Russian ownership of everything further north. But after World War II, Russia claimed the entire island chain and deported its southern residents to Japan. Tokyo has never relinquished its claim to these four islands, which it calls the Northern Territories, nor has Moscow ever agreed to hand them back. The two governments have held sporadic negotiations over the issue for more than 60 years, as yet with no result. So thorny is the question, in fact, that Japan and Russia have not yet signed a peace treaty putting a formal end to World War II.

Russia owns only half of this island in a river between northeast China and eastern Siberia, having surrendered the other half to China in 2008 as part of an agreement signed four years earlier. Prior to that accord, Russia claimed not only the full island — known to the Chinese as Heixiazi — but an adjacent one, Tarabarov or Yinong Island, as well as a handful of islets. The Soviet Union occupied them in 1929, a move that China challenged as illegal and, from the 1960s onward, demanded be rectified. Russian and Chinese officials congratulated themselves on reaching a compromise, though of course there were grumblings from nationalists on either side of the newly revised border.

Dmitry Medvedev on the Amur river opposite Blagoveshchensk, on July 3, 2010. (DMIRTY ASTAKHOV/AFP/Getty Images)

This poetically named area, sometimes referred to as the Trans-Zeya, suffered atrocities because of the Russian Empire’s determination to control it. Located on the east bank of the Zeya River, opposite the Russian city of Blagoveshchensk, the strategic spot was originally part of China. Under threat of war, the Qing Empire ceded the surrounding territory to Russia in 1858, but the Sixty-Four Villages remained an enclave under China’s protection for more than 40 years — until Chinese nationalists began an uprising against foreign powers. When rebels targeted Russian ships in the area, Russian forces drove villagers into the river en masse, drowning thousands. The district has been under Russia’s authority ever since. And though Beijing accepted the change of hands, the Republic of China in Taiwan has never recognized it. To this day, certain maps produced in Taiwan continue to show the area as Chinese territory.

Latvia, for centuries occupied by anyone and everyone in continental Europe, had a tough time drawing up its borders when it finally established its independence in the early 1920s. When it did, several Russians were left on the Latvian side of the eastern border and vice versa. When the Soviet Union annexed Latvia during World War II, it used these demographics to justify transferring some 400 square miles of what was then part of Latvia’s Abrene district to the Russian Soviet Federated Socialist Republic, on the grounds that its population was mainly Russian. Russia refused all requests to give it back, even after Latvia’s independence from the Soviet Union, and the territory is now part of Russia’s Pytalovsky district. Despite decades of resentment, Latvia recognized the revised border in a treaty signed in 2007.

Narva, Estonia, to the left; Ivangorod, Russia, to the right. (Tony Bowden/Flickr Commons)

In 1945, the city of Ivangorod was separated from its twin — the Estonian city of Narva, which lies facing it on the opposite bank of the River Narva. Once effectively one and the same administrative region in independent Estonia, the two cities are linked now by a bridge that you need a visa to cross. When the Soviet Union took Estonia in World War II, it set the Narva River as the border between the Estonian and Russian Soviet republics and there the boundary has remained — dividing the sister cities — ever since. Estonia pushed for the restoration of its pre-1945 borders long after it left the USSR — as indeed did the residents of Ivangorod, who in 2010 petitioned to rejoin their better-off Estonian neighbor. The dispute was settled (on paper, at least) just last month, when Moscow and Tallinn eventually signed a border treaty that keeps Ivangorod Russian.

Russia always knew that Finnish territory, adjoining its northwest corner, would be a useful thing to have. The Russian Empire conquered it and kept it as an autonomous but friendly buffer state. By the time World War II started, Finland had achieved independence — but the Soviet Union wanted its buffer zone once more. Specifically, it demanded southern Finnish border lands that lay opposite the key city of Leningrad. Finland refused. The Soviets invaded in the winter of 1939; the Finns fought back; after three months of war and hundreds of thousands of deaths, Finland agreed to cede around 10 percent of its total territory. Most of it was in the southeast province of Karjala, or Karelia, and with it Finland’s second biggest city, Viipuri (or as the Russians renamed it, Vyborg). With assistance from the Nazis, Finland briefly recaptured its lost lands, but from 1944 onwards the Soviet Union regained control. Since then Finland seems to have abandoned its hopes of getting the territory back, though activist groups — and the occasional politician — still lobby for Karelia’s return.

Kaliningrad is Russia’s oddest outpost, unconnected to the rest of the country by land or anything but recent history. Perched on the coast of the Baltic Sea between modern-day Lithuania and Poland, it was for centuries a German-speaking port called Königsberg, inhabited at various times by such giants of German culture as Immanuel Kant, E.T.A. Hoffmann and Hannah Arendt. It took just days for Allied bombers to devastate it during World War II. Soviet troops captured what remained of Königsberg in 1945 and post-war agreements made the city and its environs a part of the Soviet Union. The Soviets promptly expelled any remaining German residents, replaced them with Russian-speaking immigrants and changed the city’s name to Kaliningrad, in honor of Soviet leader Mikhail Kalinin. And Russian it has remained, ever more isolated since the USSR collapsed and both of its neighbors joined the EU. In recent years, parts of the city’s pre-Russian architecture have been rebuilt, German visitors have returned and every so often a rumor surfaces that Germany might seek to regain its lost city in exchange for writing off Russian debt. But to date, Kaliningrad remains an island of Russia in a sea of Europe.