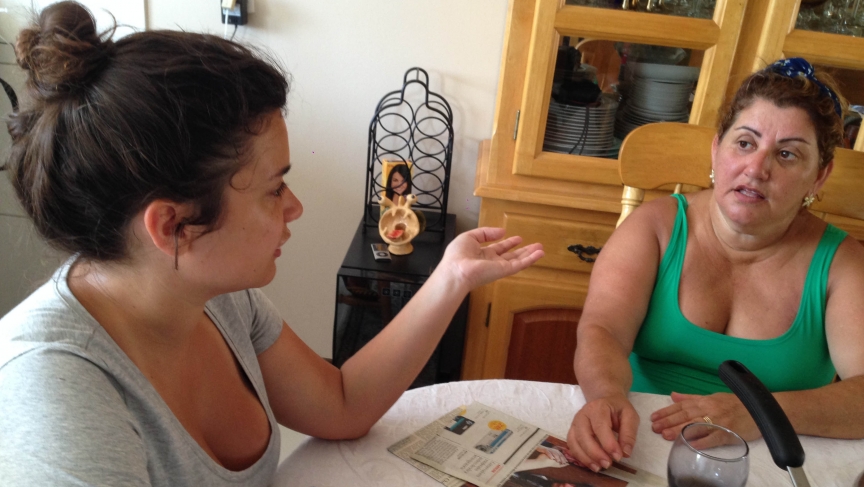 Renata Teodoro (left) visits her mother, Gorete, in southern Brazil. Teodoro, 26, and her mother were photographed on the front page of the New York Times in June 2013 as they embraced through a metal fence on the US-Mexico border.

On a windy afternoon in Brazil, Renata Teodoro looks up from her coffee cup and smiles at her 81-year-old grandmother. Teodoro is a college student in Boston and hasn't been back to Brazil in 20 years for a simple reason: she's been an undocumented immigrant in the US most of her life.

Her mother, Gorete, runs around making sure everyone's mugs are filled. "It's coffee time every time," Teodoro says.

"Breakfast, before lunch, after lunch — any time we're not eating is pretty much coffee time." She sits outside her grandmother's patio in Rincón Beach, on the southern coast of Brazil near where she was born.

Teodoro has been visiting her family in the southern coastal Brazilian state of Santa Catarina for two months. After coffee, she heads to the beach for a last look.

"My mom used to cook a lot of stuff with corn when I was little — like even in the United States — and I was always like: 'Why did she cook so many things with corn?'" she says. "And [now] I come here, and it makes so much sense, because there's ... corn around us. Like everywhere you go, there's corn."

Teodoro was a toddler when she crossed the US border illegally with her family. Brazil's economy had crashed and her parents wanted a better life. They lived in Massachusetts until 2007, when Teodoro's family faced--or feared--deportation. Everyone in the family, except her, went back to Brazil. She says she stayed behind to continue her studies.

Five years later, a US government program called the Deferred Action for Childhood Arrivals, or DACA, protected Teodoro from deportation, since she came to America undocumented as a child. In the US, there are approximately 900,000 young immigrants that qualify for DACA status.

According to US Citizenship and Immigration Services, to qualify for DACA status an undocumented immigrant must:

For Teodoro, this was her first trip to Brazil since the family was separated. It was a chance to spend time with her brother and sister. Like with any family, they had a few friendly arguments, too. Teodoro looks up to her older brother, Rafa, who is 31. Since he returned from the US, he works in the local coal mine. Her 22-year-old sister, Sabrina, works long hours at a bakery with her mom.

"I actually can see from their stories, like the struggle it was to rebuild their lives here, and that's really upsetting because most people don't have to deal with that," Teodoro says.

It was tough to say goodbye. Teodoro wondered when she'd be able to see her family again. She also became worried when US immigration officials made her wait three hours at the airport, while they reviewed her documents. But she made it back into the US without a problem. She says she learned a lot during the process that she wishes someone had told her before she left.

So, a few days after her return to the US, she travelled to Arizona to share her experience at a United We Dream convention. She spoke to over 60 young immigrants like her — who came to the US as children and got a reprieve from deportation. Teodoro gave them advice on how she traveled using an option called advance parole. Her story gave them confidence to apply for their right to travel while maintaining their legal status in the US.

"It just feels right to be able to do that, it feels normal not to be stuck in somewhere, not to feel like you're stuck in this country," she says. "So when you get to travel, it almost feels like you are free."

But Teodoro wants more. She says the next time she travels, she wants to come back to the airport and enter the line for US citizens.

Check out this video of Renata on our Instagram feed. We ask a variety of interesting immigrants to answer one simple question: What brings you home? Look for their answer on Instagram under the hashtag #JustLikeHome