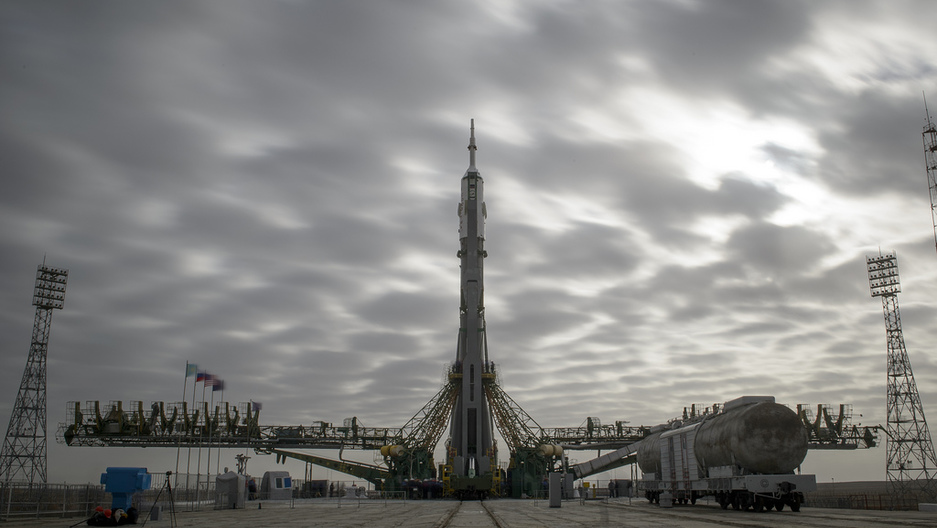 The Soyuz TMA-12M spacecraft is seen after being erected on the launch pad on Sunday, March 23, 2014, at the Baikonur Cosmodrome in Kazakhstan. It is sending two Russians and an American to their six-month mission aboard the International Space Station.

On the ground, Russia and the US may be on tense terms. But in space, it is another world.

"I think they must feel quite uneasy watching what's happening with the international situation around the Crimea annexation," says Roald Sagdeev, a former director of the Soviet Space Research Institute. Still, he's confident the crew has been instructed to devote all of its energy and time to true international cooperation.

"Judging from what we actually witnessed during the real Cold War, 15, 25, 40 years ago, we can expect that, even at this time of international tension, space cooperation would proceed normally."

During the Cold War, Sagdeev says, scientific cooperation wasn’t distracted by political issues. "Despite the political confrontation — different strong and threatening pronouncements —both sides tried to keep certain channels of communication open, and space was one of them, always."

He cites the joint docking in space between NASA's Apollo and the Soviet Soyuz spacecraft in 1975, at the very peak of the Cold War.

"A similar thing was happening with international science cooperation. Despite all the rhetoric of the Cold War, whenever scientists were meeting each other, it was in the atmosphere of comradery," he adds.

If you've seen the popular space fiction movie 2010 (the sequel to 2001: A Space Odyssey) featuring a joint Soviet-US mission to Jupiter, then you might imagine the sort of trust issues the Russians and Americans could run into in space. But Sagdeev says that's not how things go in space.

"Of course, there was indoctrination. I don't know much about the American side, but on the Soviet side, when we Soviet scientists were allowed to participate in international conferences, we were instructed to talk about the superiority of the socialist system. It was in the list of instructions. So what we did was we exchanged political jokes and anecdotes," he recalls. "For example, there's a series of jokes from that era called the Armenian radio stories."

Here's an example: a radio listener asks Armenian radio "what is the difference between socialism and capitalism?" and the radio host answers, "Very simple. Capitalism is when one man exploits another. What is socialism? Quite the opposite." Sagdeev said jokes like that, funny or not, kept cooperation alive.

He says he's not aware of tension aboard the space station that would challenge the crew's focus on the mission. "I don't believe there will be any complication. I think there is the intention on both sides now to keep space cooperation — at least within the framework of the International Space Station — going as it was before. Perhaps cosmonauts and astronauts are exchanging these political jokes like we did during the Cold War."

NASA chief Charlie Bolden said recently that crews on the space station are accustomed to dealing with political tensions.

"I think people lose track of the fact that we have occupied the International Space Station now for 13 consecutive years uninterrupted, and that has been through multiple international crises," he said during a news conference.

"I don't think it's an insignificant fact that we're starting to see a number of people with the idea that the International Space Station be nominated for the Nobel Peace Prize. It's not trivial," added Bolden. "It has continued to exist and continued to function with people from a variety of cultures and beliefs."

"Right now, everything is normal in our, NASA's, relationship with the Russians," Bolden said. "I'm not an historian — but over the duration of the human spaceflight program, particularly over the last 15 years since the International Space Station has been on orbit, it's very important to understand that it started with a partnership between the United States and Russia. That partnership in space remains intact and normal."