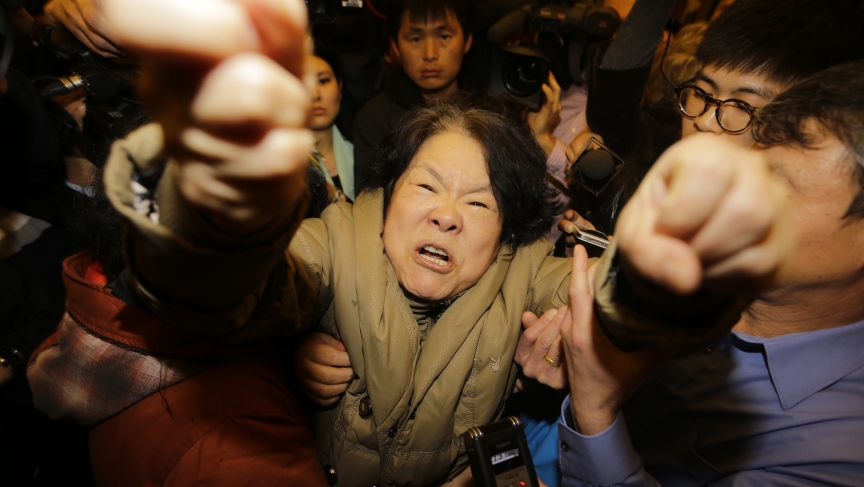 A family member of a passenger aboard Malaysia Airlines MH370 shouts at journalists after watching a television broadcast of a news conference, at the Lido hotel in Beijing, March 24, 2014.

Grief has turned to anger for some of those who lost loved ones on the missing Malaysia Airlines jet. Today, a group of relatives marched to the Malaysian embassy in Beijing and threw plastic water bottles and chanted, "Liars!''

Many families are confused and inconsolable, explained Wayne Ma of The Wall Street Journal. After two weeks of offering conflicting reports and false leads, Malaysian authorities announced yesterday that all data indicates the plane went down in a remote part of the Indian Ocean. Following that announcement, the gathered family members poured out of the ballroom of the Metro Park Lido Hotel, many clearly distressed.

Ma found people in the hallways, crying. "There was a woman being put onto a stretcher," Ma said. "I was actually attacked by two family members, as well, who were just unhappy with the media presence there."

"One woman was screaming at the government," he continued, "and she just didn't believe the plane had enough fuel to end up in the ocean. She herself said that she didn't see any point in living, and she herself wanted to fly a Malaysian Airlines plane and go into the ocean, as well."

Chinese authorities, said Ma, allowed the protest by family members to happen without interference. "It helps the families that the government is on their side."

He observed that authorities were taking care to ensure headlines continued to be positive about the Chinese government, "and that [the] Malaysian government sort of gets the blame."