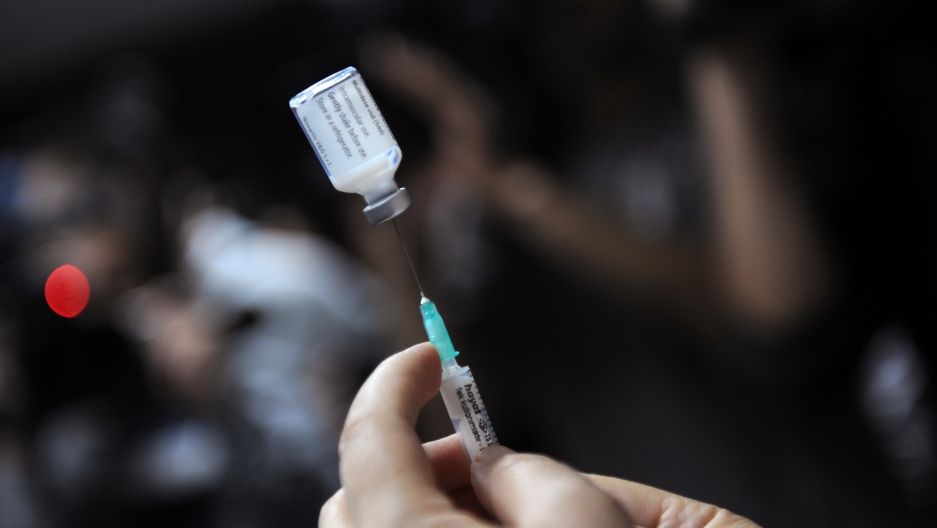 “It felt as if a disaster were about to happen,” she says. “You got tears in your eyes thinking about it, this was something serious.”

She took her two young daughters to a local gym being used to provide mass inoculations against the H1N1 strain, where they received injections of the Pandemrix vaccine.

“She falls asleep everywhere, even on the toilet,” Jacobsen says.

People with the incurable neurological disease — caused by the brain's inability to regulate sleep cycles — experience excessive daytime sleepiness, hallucinations and other symptoms.

Now 5, Sofie’s not alone. Norway has seen more than 170 reported cases of children developing narcolepsy after receiving the Pandemrix vaccine.

The government has so far paid $13 million to 86 victims, including 60 children, because it hasn’t been able to rule out that their condition stems from the vaccine officials strongly urged them to take. That compensation is expected to rise.

Back in 2009, the Norwegian health authorities urged everyone, not just at-risk groups, to receive vaccinations after the World Health Organization designated swine flu a pandemic.

More than 2 million Norwegians, or 45 percent of the country's population, were given Pandemrix in an unprecedented drive. The vaccine is produced by GlaxoSmithKline (GSK) and was used to inoculate up to 30 million people in 47 other European countries.

After the first cases of what appeared to be vaccine-related narcolepsy were discovered in children in neighboring Sweden and Finland the following summer, the Norwegian health authorities started looking for similar cases and found them.

Although scientists haven't established a link between Pandemrix and narcolepsy beyond doubt, it’s been accepted by Norwegian officials in practice thanks to strong evidence from a spike in the normally rare disease after so many doses were given in so many countries, says Hanne Noekleby, director of infectious diseases at the Norwegian National Institute of Health.

"This was a very special situation," she says.

Hundreds of cases have also been registered in Britain, France and many other countries.

Nevertheless, GSK has refused to acknowledge a link between its vaccine and narcolepsy in children.

Responding to an emailed question, spokesman David Denby wrote, “While some people vaccinated with Pandemrix have been shown in several published studies to be more likely to develop narcolepsy than those who weren’t, further research is needed to confirm what role the vaccine may have played in the development of narcolepsy among those affected.”

Back in Norway, many victims’ parents aren’t happy with the government’s reaction.

The current maximum payout for a child who was under the age of 16 at the time of the injury is the equivalent of $330,000 for a permanent disability.

"The government is at a fairly low level there, that's what a lot of parents are reacting to," says Christian Lundin, a lawyer in Oslo who represents 40 children who developed narcolepsy after receiving the vaccine.

"Their children were damaged after massive pressure to take a vaccine, and then the government isn’t very amenable when it comes to paying compensation for that."

Although there’s been no litigation so far, Lundin doesn’t rule out the possibility of a class action in the future.

“The situation is terrible,” she says. “He’s 100 percent disabled. We don't know if it's going to get better, he's on so much medication. But we hope something will happen, that he will get his life back.”