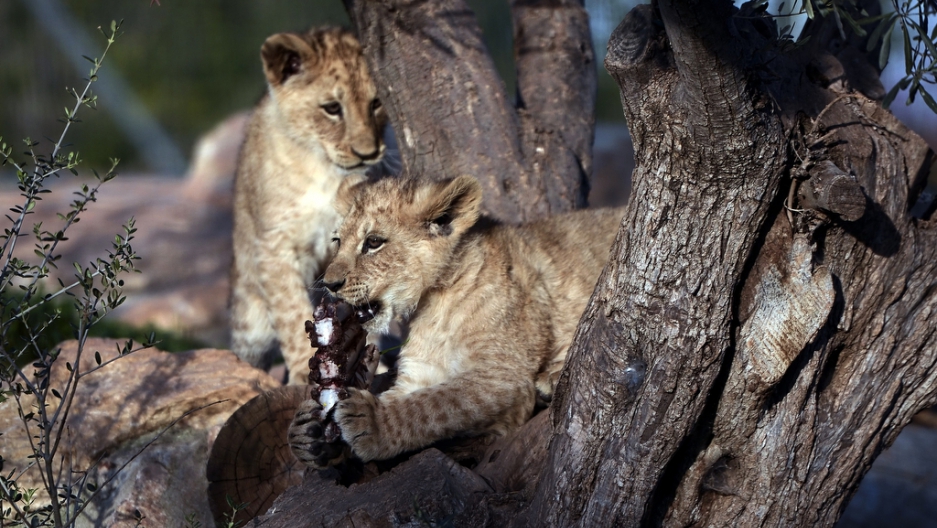 Four-month-old lion cubs play in their enclosure at the Attica Zoological Park in Spata, near the Greek capital of Athens, on March 23, 2014.
Share

Is this Danish zoo getting trigger happy?

After sparking international outrage by killing a healthy young giraffe to prevent inbreeding, Copenhagen Zoo put down two lions and two 10 month-old cubs to make room for a new male.

The four lions, which were from the same family, were euthanized on Monday after the zoo failed to find them a new home.

“Because of the pride of lions’ natural structure and behavior, the zoo has had to euthanize the two old lions and two young lions who were not old enough to fend for themselves," Copenhagen Zoo said in a statement on Tuesday.

The young lions “would have been killed by the new male lion as soon as he got the chance.”

It also said the older lions, a 16-year-old male and a 14-year-old female, were getting to the end of their natural lives.

In the coming days, the new male will be introduced to the zoo’s two resident female lions, who have reached breeding age.

More from GlobalPost: Children watched as a giraffe was euthanized and fed to lions

The untimely deaths of the four lions came after the zoo put down an 18-month-old giraffe called Marius last month.

Zoo workers used a bolt gun to kill Marius in front of visitors to the zoo, including young children. His body was then chopped up and fed to lions. It's not clear if they were the same lions who were put down this week.

Their efforts were to no avail.

A small consolation for visitors to Copenhagen zoo this week is they will be spared a public dissection of the lions.

"Not all our animals are dissected in front of an audience," a spokesman told Agence France-Presse.

The head of the zoo, Steffen Straede, defended the zoo to Ritzau news bureau, saying, "I think people are more enlightened after Marius."

"Marius hasn't made us the least bit afraid, because what we are doing is the most correct thing to do."