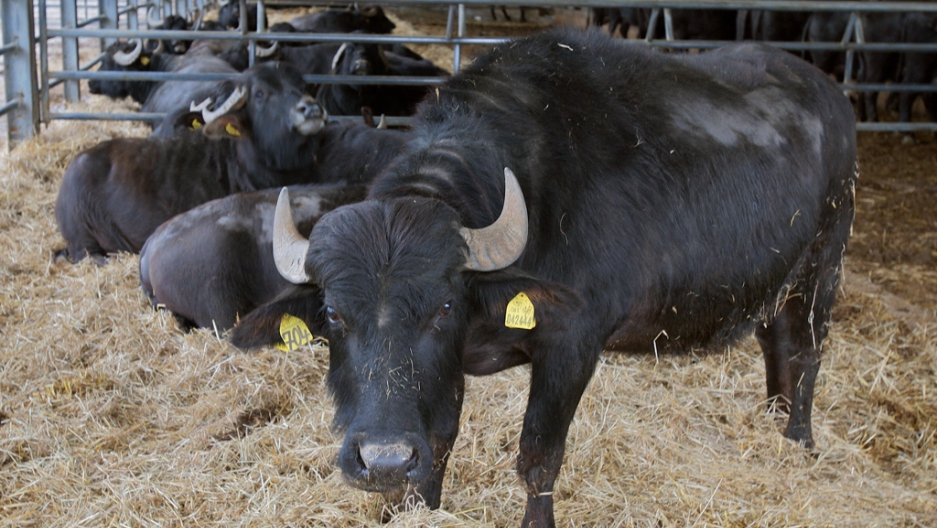 Water buffalo stand on a farm of the Italian city of Ciorlano on March 26, 2008.
Credit: AFP
Share

If the European Union has its way, the cheese you sprinkle on your spaghetti won't be called Parmesan anymore.

Cheese became an unlikely issue as the United States and EU hammered out trade agreements, with European negotiators saying you can only buy Parmesan in Parma, Cheddar in England and Brie in France.

If such demands were met, it would mean American producers of cheeses like Parmesan, Asiago, Gorgonzola, feta, fontina, grana, Muenster, Neufchatel and Romano would have to find new names to sell across the pond.

Producers in the United States suggest they were the ones that made products like cheese, sausage and wine so globally popular.

“We have invested years and years making these cheeses,” Wisconsin cheese maker Errico Auricchio said. “You cannot stop the spreading of culture, especially in the global economy.”

The EU has hundreds of protected products, but the phenomenon isn’t restricted to the continent... or to cheese.

Here are some notable examples of food and drink whose monikers you can't throw around lightly:

If you see Juan Valdez and his burro, you know it’s really Colombian coffee. No, seriously.

The famous (fictional) coffee grower has a “Denomination of Origin” to back him up in court.  With 560,000 people employed in the coffee industry, Colombia ranks as the second largest coffee producer in the world.

In 2007, Colombian coffee became the first product from outside Europe to receive a “protected geographical indication” from the European Union.

It’s not tequila unless it’s produced from blue Weber agave harvested in specific regions (Jalisco, and parts of Michoacan, among select others). It also has to contain no less than 35 percent alcohol and come affixed with a Made in Mexico label.

Don’t get us started about finding worms in bottles. That’s mezcal and a totally different story.

Farmers from Georgia realized long ago that their sweet onions were different from all the others. They sought protected status for the growing region in the mid-1980s.

The state defined 20 areas in Georgia that could call their onions Vidalia in 1986, and that protection went national three years later.

Feta is Greek, and not just one region but the whole country considers the cheese part of its national identity and cuisine. The trouble is Bulgaria, Germany, Denmark and France are very fond of the cheese, too.

Greece received protected status from the European Commission in 1996. It was overturned due to legal challenges, but later re-established. As stipulated, feta can only be called feta if it's made in Greece from "unpasteurised sheep's milk, or a mixture of sheep's milk with goat's milk, and then curdled with rennet."

Perhaps no food in the world has been more adulterated than poor cheddar cheese, which often comes saddled with the word “processed” in North America. It’s a sad fate for a cheese that dates back to the 12th Century in Cheddar, England. The caves around Cheddar provided the optimal conditions for Cheddaring.

If you’re looking for the original, only 14 makers from four English counties are licensed to use the title “West Country Farmhouse Cheddar.”

This is probably the best known example of a region that gets rather upset when you call any old “sparkling white wine” Champagne. Only bubbly bottled in northern France can call itself that.

The designation dates back to 1908, and to produce true Champagne you must consider grape growing, pruning, harvesting, handling and the natural fermentation that gives Champagne its bubbles.

If you think cheddar is old, balsamic vinegar can trace its origins to the time of the Roman Empire. Its modern appellation — with balsamic in the title — dates to 1747 and is said to contain therapeutic properties.

Bet you didn’t think there were water buffalo in Italy, did you? Well, the sturdy draft animals arrived in the country in the 7th Century and were prized for their power, and light touch. Their hooves don’t sink too deeply into wet soil.

They also produce milk that makes wonderfully light, soft cheese; you can’t drink it because of its fat content, but you can make cheese. It’s specific to seven provinces in the central coastal areas of western Italy (the shin of the boot).

Perhaps it's better left to the professionals, as The New York Times noted in 2012, "Over the last 15 years, in fact, the attempt to make authentic buffalo mozzarella — to nail both its taste and texture — has destroyed businesses from Vermont to Los Angeles."

Dry-cured and often served raw (don’t call it Prosciutto lest you start an international incident), Serrano ham can be found throughout Spain but holds special ties to mountainous forests. It received its protected designation in 2000.

The ham, produced from several different breeds of white pigs, such as Duroc, Landrace or Large White, can be cured for as long as 18 months. The highest quality of ham, Jamon Iberico, comes from Iberian hogs that graze on acorns and cereal along the countryside.

Only around 5 percent of the ham produced in Spain is Iberian, and it sells for a higher price than Serrano.

You know a foodie has crashed your tailgate party when they ask if the “brats” are true Nurnberger Bratwurste. Of course, you would probably already know that because they’d be wearing a 49ers jersey. Seriously, though, the smaller the all-pork loin brats seasoned with marjoram, the more likely they hail from Germany. Circa 1313.