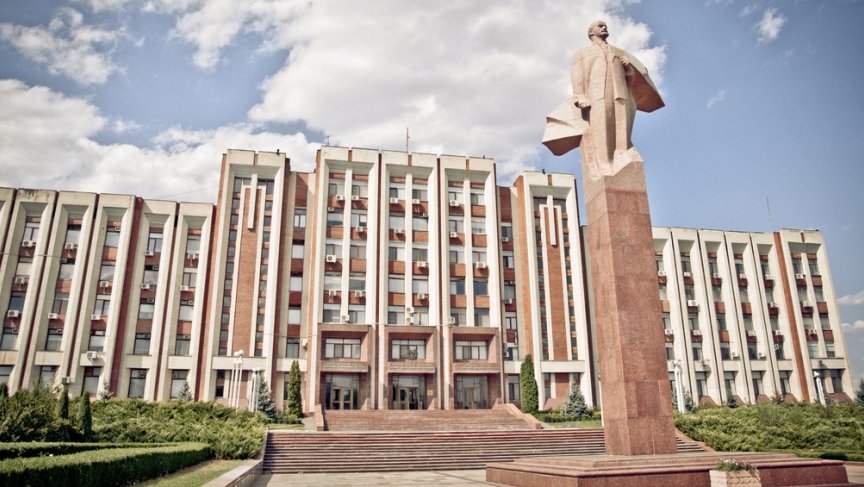 Statue of Vladimir Lenin in front of the Transnistrian parliament building in the break-away region’s capital, Tiraspol.

While it is not a part of NATO territory, the country of Moldova has been on the mind of NATO's General Philip Breedlove lately. He's specifically interested in a small region called Transnistria.

“The Russian forces now gathered are of sufficient size to pose a potential threat, not just to Eastern Ukraine, but also [to] the Transnistria region in Moldova,” said General Breedlove in a recent statement.

If you have never heard of Transnistria, sometimes referred to as Trans Dniester — you're not alone.

Most of the world doesn’t recognize the state of Transnistria, which is considered a breakaway region of the Republic of Moldova.

“It’s a very small strip of land between Ukraine and Moldova and, actually, it’s an official part of Moldova,” said freelance journalist Mitra Nazar, who’s been reporting from the unrecognized capital, Tiraspol, of the unrecognized country.

Just before the Soviet Union collapsed, Transnistria decided to declare independence in 1990. “They didn’t want to be part of a Moldovan state that leans towards Romania,” said Nazar. “People in Transnistria feel way more Russian, so they declared independence, but were not recognized.”

That declaration of independence led to a civil war in Moldova, which lasted until a ceasefire in 1992. “They call it a 'frozen conflict' up until today,” said Nazar.

But Transnistrians have been paying particularly close attention to the situation happening just across the border in Ukraine, according to Nazar. “Since the annexation of Crimea, the atmosphere here in Transnistria has been ecstatic,” she said.

“People see it as a sign of hope. They believe that now they might be next. That’s very important for the people here, who have been waiting for reunification for the past 20 years. They want to be part of Russia more than anything else.”

One of the hopeful Transnistrians that Nazar spoke with is a pensioner who lives in the countryside.

“She lives under a very small pension with one goat, one pig, and some chickens for eggs,” said Nazar. “Her pension is small now and she knows that, in Russia, pensions are higher. She also hopes for the young generation.”

The pensioner told Nazar that she hoped annexation by Russia would mean more investment in factories and jobs, so that young people would be able to stay in the region.

It's not clear what benefits Russia would gain from annexing the breakaway region.

“In the end, it all comes down to geopolitics,” said Nazar, “For 20 years, Russia hasn’t recognized Transnistria, mainly because Russia needs to keep some influence in Moldova, as well."

Moldova, which according to Nazar was pro-Russia years ago, now leans more towards the European Union. However, it still has many Russian speakers.

Would Russia dare to give up its influence in Moldova by annexing Transnistria?  “People here dare to believe that they will,” said Nazar.