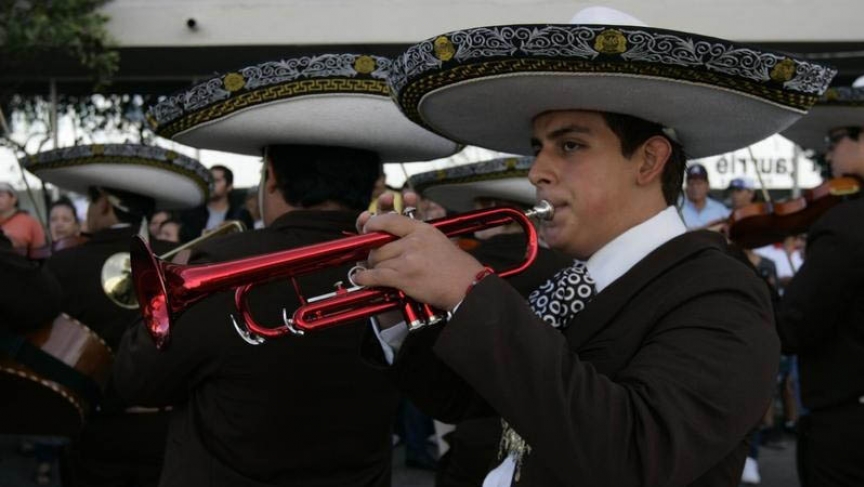 A mariachi plays a red trumpet during the International Mariachi Parade in Guadalajara September 2, 2012. Mariachis, traditional Mexican musicians whose music originated in the 19th century in the state of Jalisco, play music for paying customers in public places, bars and restaurants, or at weddings and parties, and have been officially declared an "intangible cultural heritage of humanity" by UNESCO.

Mariachi music is the quintessential sound of Mexico. And its spiritual center is Mexico City’s historic Plaza Garibaldi.

The square is lined with bars, restaurants, and nightclubs — and more than a few drunks spilling out of them. Groups of men dressed in highly-ornamented mariachi suits also roam the plaza, day and night, looking for work.

For $150 pesos, about $10 US, you can ask them to play you a song, any song, within the mariachi tradition. These guys are like walking juke boxes.

They likely learned their craft from their fathers and grandfathers before them. That’s the way it’s always been done in Mexico. If Mexicans wanted to formally study mariachi in school, they couldn’t… until recently.

Inside a building on the plaza, the rules are changing. That's where you'll find the Escuela de Mariachi Ollin Yoliztli, a new school run by the state government (Gobierno del Distrito Federal) and located in a former nightclub. It is the first formal mariachi program in Mexico. (Guadalajara has had some informal mariachi programs.)

In the school, students practice their scales on instruments like the guitarron — an oversized, deep-bodied guitar that’s essential to any mariachi ensemble.

There are a few curiosities here. First, there’s the director, Leticia Soto — a woman running a male-dominated, macho pastime in Mexico.

“The other part of it is sometimes they don’t know that I’m not [Mexican], that I’m Mexican-American,” says Soto. “And when they find out that I was not born in Mexico, their face kind of goes down, and they’re like, ‘Oh, we thought you were Mexican, too bad.’”

She quickly adds that the majority of Mexicans have been quite welcoming, even if she is a woman from Los Angeles, perhaps because she’s doing a good job. Since the school opened during the fall of 2012, they have 200 students enrolled, and 25 are women.

“It would only be fair to have it half and half,” says Soto, who is trying to grow the number of women. Soto, herself, grew up playing the violin and mariachi music in the Los Angeles area, where many girls played mariachi. For her, it was a way to feel more connected to her Mexican identity.

Here’s another curiosity about the new school — and the one that could be the hardest to overcome — in Mexico, mariachi music can be, well, kind of a joke.

They see mariachis on the streets in front of Plaza Garibaldi flagging down cars, fighting for customers to play at weddings, quinceañeras (celebrations for 15-year-old girls), and parties. Soto says one prominent music composer asked her, “Why are you going to send mariachis to formalize their training if all they’re going to do is flag down cars anyway?”

But that’s only some mariachis. Top musicians tour the world as ambassadors of Mexican culture. Soto is trying to develop that class of musician and elevate mariachi music as an art form. And she adds, if you don’t have a parent or grandparent to teach you how to play mariachi music, it can be difficult to learn.

Trumpet player Jesus Jimenez Viernes didn’t have that problem. He comes from a mariachi family and his grandfather was a famous mariachi. Still, if you want to get really good, school helps.

Mastering mariachi also means learning to play within a group. To state the obvious: music school brings musicians together.

I visited a classroom where students were learning to play as an ensemble. To be honest, the students didn’t sound that smooth. But, hey, this is school, so they’ll get there.

By the time the students finish the three-year program in Mexico City, if they want to work as professional mariachis, they’ll need to know how to play every single song in the mariachi canon by heart. Music stands are not allowed. They’ll also need to know some contemporary pop and rock songs, too, which have been absorbed by the mariachi culture.

Leticia Soto says that’s what people love about mariachi, and that’s why they have a school — to keep the tradition going.

“When people want to listen to live music, they want to hear their song," she says, "and they want for the mariachi to perform what they’re feeling at the moment.”