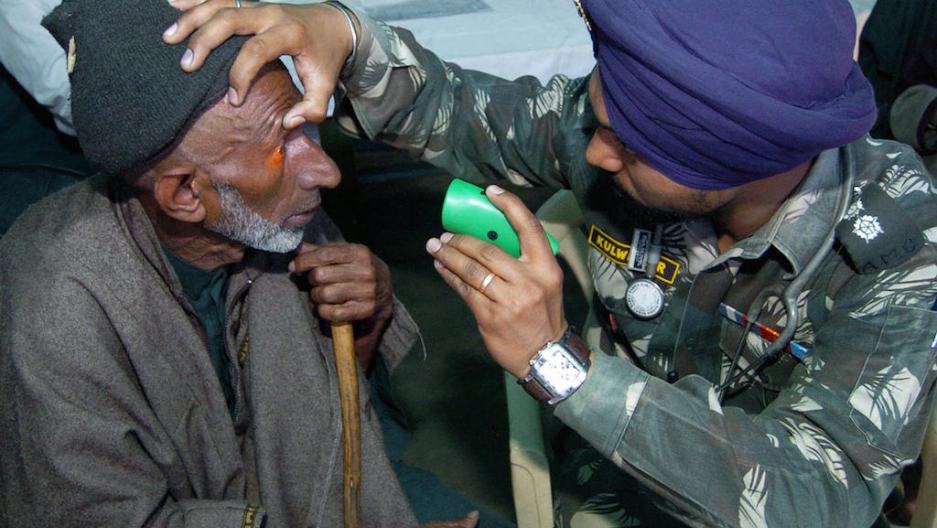 An Indian army doctor (R) checks the eyes of a Kashmiri man during a medical camp in Mujpather, some 45 Kms from Srinagar, 31 March 2007. Many medical practitioners in India are not properly trained.
Credit: Rouf Bhat
Share

NEW DELHI — On May 13, 2012, Kaamini Solanki woke up feeling ill. Her husband felt her forehead, which was so hot they decided to see her gynecologist right away.

Kaamini, a pretty, plump-faced schoolteacher from Delhi, was two months into her second pregnancy. The couple wasn’t going to take any chances.

The gynecologist referred them to a nearby hospital, where they arrived in the morning and remained until evening. Meanwhile, Kaamini was fading. Around 8 p.m. she started to cry, saying she was in pain and complaining to her husband, Dheeraj, about the hospital’s physician.

A few hours later, she was dead.

Kaamini had developed septicemia, a blood infection that is usually fatal if not promptly diagnosed and treated. But as Dheeraj now sees it, that wasn’t the real cause of her death.

After filing a case against the doctors he had trusted with her care, he received some shocking news: The gynecologist had only a bachelor’s degree in medicine. And the hospital’s doctor was a fraud, with no medical training at all.

“All of them killed my wife,” says Dheeraj, a soft-spoken man of 38 who lives with his mother and his 11-year-old daughter. “Nobody can expect that in a hospital, in an emergency ward, a quack will be working.”

After nearly two years of talking to police and health authorities, Dheeraj has gotten wiser. The Delhi Medical Council, a state board, estimates that the capital alone has more than 40,000 fake doctors, outstripping the number of bona fide physicians. And in rural India, doctors are all but absent. Preliminary results from new research show a mere 1-in-24 healthcare providers — including physicians, Ayurveda practitioners and anyone else prescribing the Western medicine or herbal remedies that Indians rely on — is qualified in modern medicine, according to Jishnu Das, a lead economist with the World Bank.

India’s government has tried to rein in quackery, but experts say the efforts have been weak and the problem just keeps growing. Even at hospitals, patients can no longer be certain who’s donning the white coat.

“It is very difficult to identify a quack,” says Dr. Anil Bansal, who heads the anti-quackery cell at Delhi Medical Council. “For a common man or a tourist, it is impossible.”

Over the years, Bansal has reviewed several medical horror stories involving fake doctors. There was a girl who hemorrhaged to death after a minor tongue surgery, for example, and a woman left to rot in a shuttered clinic after she died during treatment.

Quacks often start out as helping hands at doctors’ offices, or as blue-collar workers at hospitals. Many have no schooling beyond eighth grade. Others have training only in alternative health systems such as homeopathy or Ayurveda, yet illegally dole out potent modern drugs.

A common example is the “fever cocktail,” a mix of painkillers, antibiotics, malaria drugs and steroids sold in little paper wrappers. “The entire thing is dangerous, and the use of steroids is particularly dangerous,” says Dr. Amit Sengupta, a public health expert with People’s Health Movement Global in Delhi.

Steroids reduce inflammation, but have serious side effects and can make people susceptible to infections. Unchecked use of antibiotics breeds widespread resistance to drugs used to fight tuberculosis and other major diseases, a growing concern worldwide.

This unwarranted medicine is rarely fatal although the doctors’ fees and the drugs they sell can inflict a severe economic toll on the poor. According to the World Bank, health spending plunges tens of millions of Indians into poverty every year.

The most immediate threat to patients, however, is not getting the right diagnosis. That can be fatal.

Dheeraj says his wife’s blood infection was not diagnosed until he took her to a second hospital late in the evening. By then it was too late.

“Each and every day I remember her,” Dheeraj told GlobalPost, his voice breaking. “Sometimes I close my eyes and think it’s all a bad dream.”

While the case is still being reviewed by the Delhi Medical Council, Bansal says the fake doctor “may have missed the serious condition of the patient.”

Smaller, private hospitals in particular are known to wittingly hire unqualified medics because they are several times cheaper than the real thing.

In January, the local government in Delhi announced that hospitals illegally employing alternative practitioners as physicians will have their registration cancelled. But whether that will have a real impact is far from certain.

For one, quacks are even more common at hospitals outside Delhi than in the capital itself, according to Sengupta of People’s Health Movement Global. And India already has laws banning quackery, though they are rarely enforced, in part because the country has little else to offer its needy citizens as health care.

Dheeraj has sued the hospital’s owner and the fake doctor who treated his wife. He is also planning to start an advocacy group to fight quackery. Although a medical diploma is no guarantee against wrong diagnoses and absurd prescriptions, at hospitals at least he feels patients should be able to trust that their doctors have in fact gone to medical school.

And last Dheeraj heard, the quack he says killed his wife was working at a new hospital not 10 minutes away.

“I don’t want any type of monetary compensation,” says Dheeraj. “I just want this practice [to] be stopped.”