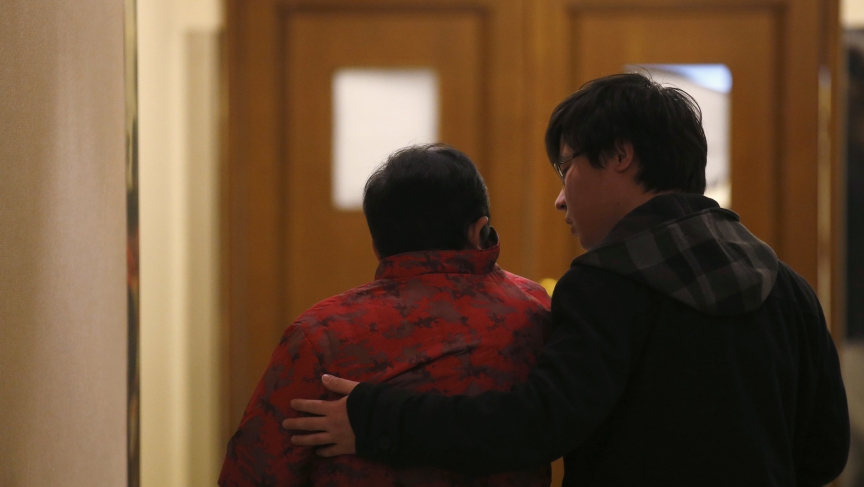 A man comforts a family member of a passenger onboard the missing Malaysia Airlines flight MH370 as they wait for news from Malaysia Airlines, at the lobby of a hotel in Beijing, March 14, 2014.

It was a journey that began in Kuala Lumpur and was supposed to have ended in Beijing more than two weeks ago.

Monday, Malaysian authorities announced what they believe is finally the end of the journey for Flight 370.

Based on what's being called an "unprecedented" analysis of satellite data, Malaysian Prime Minister Najib Razak said there was no longer any doubt that Malaysian Airlines Flight 370 flew south over remote waters of the Indian Ocean — where there was nowhere it could land — and crashed.

"With deep sadness and regret that I must inform you that, according to this new data, Flight MH370 ended in the southern Indian Ocean," he said at a news conference. "We share this information out of a commitment to openness and respect for the families — two principles that have guided this investigation."

Throughout the investigation, sad portraits of the families of the missing passengers have emerged. Images of relatives dominated the media, especially in China, as the search dragged on.

For the families, this announcement may finally bring some closure, though they likely will never have bodies or other physical remains to say goodbye to. Their loved ones will, to some degree, remain "missing."

Pauline Boss, a professor of psychology at the University of Minnesota and author of "Ambiguous Loss: Learning to Live with Unresolved Grief," says it will take quite some time for the families to accept that their loved ones have died — even if they do locate the plane.

"In fact, with ambiguous loss, which this is, there's never any closure," she says.

Boss says people who experience loss are always teetering in a world of uncertainty. They know on some level that their loved one is dead, but since a body hasn't been recovered, there is something of a nagging "what if" feeling.

Boss adds that the families of Flight 370 are likely experiencing a double traumatization right now, because of the heightened media coverage these events have received.

"They need to be in a private place — talking with each other, talking with counselors," she says. Boss has been in contact with counselors in Kuala Lumpur. "Only the people who want to talk with the press should talk with the press. The press should realize that we need more patience with people who have no body to bury and no evidence yet. In the absence of facts, all theories are probable. When the families say, 'My loved one might be on top of an airplane wing in the middle of the Indian Ocean,' I don't contradict that — I think we should just listen patiently."

Some individuals have an easier time accepting the death of their loved ones, Boss says. In this case, they may acknowledge that the plane went down and that their loved one has died. Many others, however, may acknowledge the plane crash, but will not accept that their relative is gone. They may introduce alternative theories, like their relative floated to an island and is awaiting rescue.

"I just don't challenge that thinking — it is the way that the brain tries to cope with an unfathomable loss that has no absolute fact about it," she says. "Truth is elusive here. You can surmise the truth, but because the loss is so unresolved, the grief is unresolved. Years later, people with ambiguous loss will say things like, 'I think I saw him on a crowded street the other day.'"

Even if pieces of the wreckage of Flight 370 emerge, Boss says that still doesn't give a clear answer to families — even if they are told their family members are at the bottom of the sea.

"The families will say, 'We don't have evidence in front of us, we don't have a body to bury.' That is everyone's worst nightmare," she says. "It is a rough kind of loss. It is more difficult than a clear-cut death because of the not knowing. In the eyes of the family, the loss won't be a fact until they see the body. Up until that time, they have to make meaning out of a nonsensical situation."