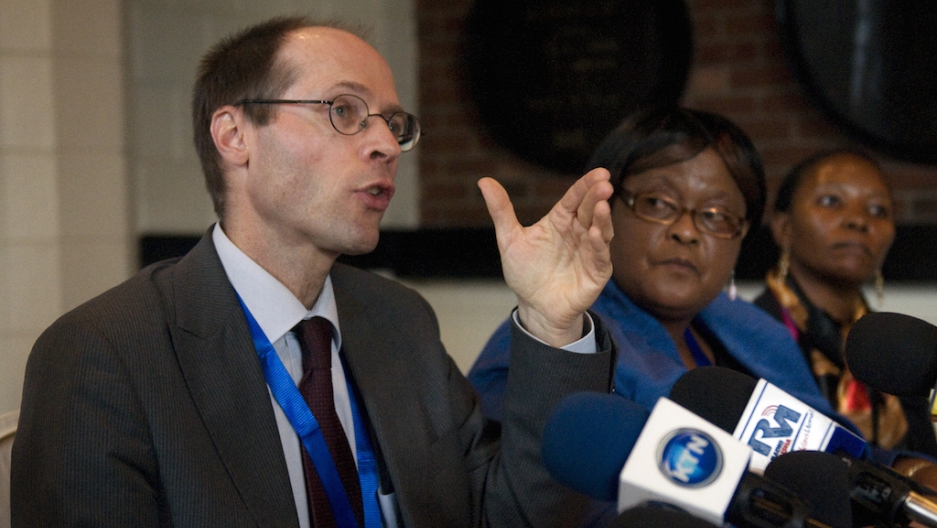 UN Special Rapporteur on the right to food, Olivier De Schutter speaks during a press conference on April 5, 2012 in Nairobi following a meeting of more than 45 food experts in the Kenyan capital Nairobi that discussed food security in Africa. De Schutter said that incorporation of a right to food in national constitutions was a necessity in the fight against food insecurity in Africa. "Food insecurity is not only due to climatic events that have increasingly affected the region adversly in the last decade", he said adding that it is also due to lack of accountability of governments, and the inability of non-governmental or parliamentary controls that governments put in place to reduce food insecurity."
Credit: TONY KARUMBA
Share

International food prices have fallen since 2008, when agricultural commodity prices doubled, pushing millions around the world from bare subsistence to hunger and raising the number of food insecure people to nearly one billion.

Is the crisis over, then? Far from it, according to Olivier De Schutter, the UN Special Rapporteur on the Right to Food. As he told the UN Human Rights Council earlier this month, global policymakers have yet to address the structural causes of the crisis. In particular, they have failed to recognize that industrial agriculture is not the ultimate solution to global hunger — and that it is, instead, part of the problem.

In part, De Schutter drew his conclusions from his official mission to Malawi last year. As I toured the country last month, it was easy to see what he saw: the promise and allure of hybrid seeds and synthetic fertilizer, as well as their limits.

De Schutter took over as Special Rapporteur on the Right to Food six years ago, as the global food crisis was breaking. His UN mandate is to advance the “progressive realization of the right to food,” and he has been a tireless advocate at a critical juncture for global agricultural and food policy. He will hand over his mandate to an as-yet-unnamed successor in April, and he used his final report to the UN Human Rights Council in Geneva to deliver a sweeping assessment of the progress to date and the daunting challenges ahead.

His message was upbeat but firm: “The eradication of hunger and malnutrition is an achievable goal. Reaching it requires, however, that we move away from business as usual.”

Twentieth century food systems 'have failed'
Unfortunately, most global policy responses to the 2008 food crisis have strayed little from business as usual. They have been too influenced by business — particularly multinational agribusiness — which profits from a food system that is over-reliant on fossil fuel-based agricultural inputs.

To his credit, during his tenure, De Schutter has been willing to ruffle some corporate feathers while arguing for greater investment in small-scale farmers who produce food sustainably.

In his final report as Special Rapporteur, De Schutter calls for a 21st century approach that replaces last century’s focus on increasing yields with high inputs of improved seed, synthetic fertilizer, and other technologies with one that stresses equity, resilience, and sustainability.

"The transition to agri-food policies that support the realization of the right to food requires major political efforts to restructure support around agro-ecological, labor-intensive, poverty-reducing forms of agriculture," De Schutter writes in the report. "The food systems we have inherited from the twentieth century have failed.”

I encountered the debate over high versus low-input agriculture everywhere I went in Malawi. Here is a very poor sub-Saharan African country, landlocked and densely populated, but with a government deeply committed to helping small-scale farmers grow most of its staple foods, particularly maize. Still, Malawi and its farmers are reliant on imported fertilizer and imported seed technologies that neither small farmers nor the government can afford.

Malawi is on a classic high-input treadmill that keeps the people and their government running, but getting nowhere. The farmers are subsidized by the government to use imported inorganic fertilizers and hybrid seeds from outside companies like Monsanto. Sometimes they get higher yields — but not if they can’t afford extra fertilizer, which the seeds require. If the subsidies run out, the farmers can’t afford the seeds or the fertilizer.

Even though food security has improved in the short run with fertilizer-induced yields — and this is no small achievement in such a food-insecure country — farmers run hard to stay mostly in place.

For Malawi’s government, this treadmill is even more daunting. The country can’t import the expensive fertilizer without adequate foreign currency, which it can only get by exporting more goods. Unlike the United States, most poor countries can only import as much as they can export. The country’s main exports are agricultural goods, mainly tobacco. But tobacco prices fell in 2011, and suddenly Malawi had no dollars to pay for imports.

The solution? Import less, including fertilizer, but export more, even though you don’t have the fertilizer to produce more. The reality is unavoidable: Run faster!

Unfortunately, this treadmill is only going to pick up speed. Last year, the government committed itself to the G8 countries’ New Alliance for Food Security and Nutrition, a private-sector-led agricultural development scheme, with hopes of drawing foreign investment for export crops like sugar and African palm.

Foreign investors in the New Alliance are promised land and public financing for irrigation, among other things. Irrigation requires foreign currency, not just for the equipment, but also for the imported fuel to run the pumps. Malawi may come out of the New Alliance with more investment and more foreign currency, but only if the projects are successful, only if the investors stay, only if – the conditionals go on.

De Schutter has been critical of the New Alliance, arguing that small-scale farmers are being left out of such arrangements. Africa represents the last continent for industrial agriculture to conquer, he told the Guardian: "There's a struggle for land, for investment, for seed systems, and first and foremost there's a struggle for political influence."

The New Alliance may focus too much on business (as usual), but since 2008 we have seen some promising alternatives to corporate-led development. One of them will come soon to Malawi.

So far about $1 billion has come into GAFSP, with strong US support. The Malawian government will soon launch a $46 million GAFSP project to build and rehabilitate irrigation for small-scale food production.

An explicit aim of the project is to encourage the self-organization of farmers into cooperatives, a prerequisite for achieving both economies of scale and infrastructure management.

When one of the project’s coordinators told me about integrating farmers into “value chains,” he was not talking about those dominated by multinational firms. He was talking about Malawian businesses involved in processing and distributing foods in the domestic market.

This is not business as usual. It is the kind of public investment that can sidestep the development treadmills, ensuring that the impressive efforts by Malawian farmers and their government move the country forward.

And it is a concrete step toward what the De Schutter calls “food democracy” — a model that focuses more on farmers and their governments and less on business.

More from GlobalPost: Malawi's paradox: Filled with both corn and hunger