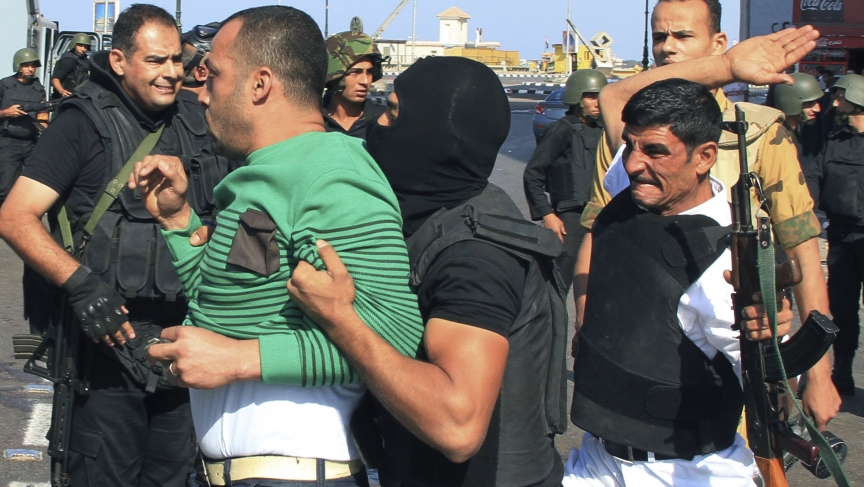 Security forces arrest a pro-Mohamed Morsi protester during clashes after the former Egyptian president was forced from power.

An Egyptian court ordered 529 people to be put to death recently — without hearing defense arguments.

The defendants are alleged supporters of the Muslim Brotherhood, the country's largest Islamist group and designated by the Egyptian government as a terrorist organization.

The 529 defendants were convicted of murdering a police officer, attacking public property and inciting violence in connection with incidents last July when then-President Mohamed Morsi was ousted by the military in a coup. Morsi was a member of the Muslim Brotherhood.

The verdict still has to be ratified by the Grand Mufti, the country's highest religious authority. In the "past, he's upheld these sorts of verdicts," said Sheera Frenkel, Middle East correspondent for BuzzFeed. She said the defendants will have a chance to appeal, but it's anyone's guess if they will be successful.

"Egypt's courts have taken a very, very strong line against this sort of violence, especially when the defendants are being accused of also being members of the Muslim Brotherhood. So a lot of their families are not hopeful they'll get the verdicts overturned," she said.

The verdict was handed down after only two days of trial. Of the 529 defendants, roughly 150 were present at the hearings. The rest, believed to be on the run, were tried in absentia.

A second group of 700 accused Muslim Brotherhood supporters will tried in court Tuesday. They could also receive the death penalty.

Frenkel said she was told by one lawyer that he and other attorneys are considering not showing up in court tomorrow to protest what they say is the judiciary system becoming "increasingly politicized. And that their defendants won't get a fair trial."

The swiftness of the trial and verdict highlight the government's crackdown on the Muslim Brotherhood and its leaders.  There's a sense among human rights groups, said Frenkel, that there is pressure being placed on the judges to find the defendants guilty — something Egypt's foreign minister publicly denied on Monday.

Morsi himself is facing a number of trials for his part in the protests that deposed him.  He won Egypt's first free election after the 30-year dictatorship of Hosni Mubarak ended. Monday's death sentences represent the greatest number issued at a single time in modern Egyptian history.  "In the years of 1980 to 2000, the years under Mubarak, only 700 people were sentenced to death in that entire time," Frenkel added.