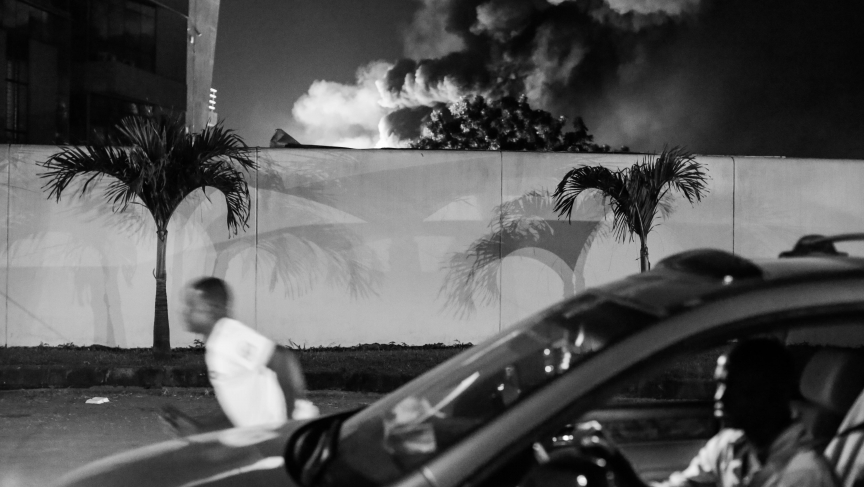 Lagos, Nigeria is known for its chaos and corruption. And Teju Cole's book, Every Day is for the Thief, offers a wild ride through a city where corruption, bribes and scams are front and center.

Cole was raised in Nigeria, and now lives in the United States. And he says some things in Nigeria are not totally different than in the US.

"Here in the US, you know that you pay lobbyists and the lobbyists buy the Senators and it's horrendous, but it's clear," Cole says.

"I don't know if that's any better from having to bribe a gateman or policeman. The problem with having to bribe everyone at every level of society — the person at the registry who is doing documents for you, the driver of your car, the teacher at your student's school — the problem with that is that it now puts you into an environment of barely containable hysteria."

Cole says getting anything done depends on jumping the line and seeking some kind of instantaneous advantage. "And I don't think that is actually good for people, because it means that every negotiation in the society is tainted with money."

In Cole's book, he describes the "yahoo yahoos" — scammers that populate Internet cafes in Lagos. "I think that everyone has gotten emails from these guys, emails originating most often from Nigeria ... from a stranger that says if you can help them transfer some funds into a bank, that you would get a cut of it."

He says in Nigerian society and Yoruba culture — which is the dominant ethnic group in Lagos — "we don't really have a class system the way it is understood here in the United States, and we don't really actually have a caste system, either. This understanding is there that, if you get money, it is utterly transformative."

And it is not just about what you can buy, Cole says, but also about your status and the respect you get. "You are considered great. People greet you in obsequious ways. Because of this dream of fabulous wealth, the desire to hustle and make it by any means possible becomes heightened," he says.

There is a Yoruba proverb which goes "every day is for the thief, one day is for the owner of the house." He says it means that when you are doing something fraudulent, it is possible to keep doing it until the day when it suddenly stops working.

He says, for Nigerians, there is a sort of comfort in thinking that those who act with impunity will eventually have their world come crashing down in a day, and those people will enter into disgrace. But that may be wishful thinking, he admits, since some people do keep getting away with it.

In the midst of chaos, Nigerians face what Cole's narrator calls "a tremendous cultural pressure to claim that one is happy, even when one is not. Especially when one is not."

"When you are in Nigeria and you are really just trying to lead a regular middle-class life," he says, "and trying to get your kids to school and get treatment at the hospital and all of that ... where everything is just an illusion in terms of the functioning of the society, you don't want to look too closely at it."

He thinks many Nigerians are dealing with a sort of constant post-traumatic stress.

He calls his meditation on Lagos "an affectionate and grimly funny portrait of the city I grew up in." Every Day is for the Thief was first published by Cassava Republic Press in Nigeria in 2007. It's been expanded and revised with provocative photographs by Cole for its publication in the US.