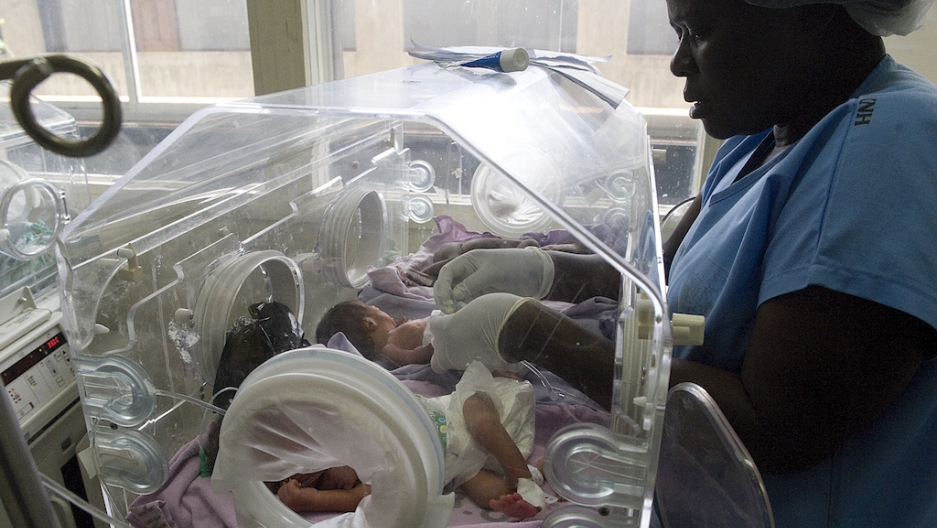 A picture taken on December 19, 2013 at a hospital in Nairobi shows a Kenyan nurse attending to four newly born babies squeezed in an incubator due to doctors and nurses strike. Kenya health workers went on strike on December 10 protesting the government decision to devolve services, including their pay, to 47 counties.
Credit: Simon Maina
Share

Health care providers in Kenya will soon have a much better shot at getting a bank loan to buy high-tech medical equipment — as long as the machines are made by General Electric.

Earlier this year, the US Agency for International Development (USAID) announced a partnership with the industrial behemoth that will make up to $10 million in credit available for Kenyan health facilities to buy its medical products, including ultrasound and MRI machines. It’s the first time the agency has partnered with a multinational company to extend credit guarantees that unlock local financing.

USAID says the partnership will help smaller clinics and hospitals get much-needed equipment to expand diagnostic and other essential health services.

The agreement is part of USAID’s Development Credit Authority, which uses loan guarantees to encourage banks to lend to customers they’ve considered too risky in the past. Since launching DCA in 1999, the agency has dramatically expanded the program in recent years as part of a broader push to increase partnerships with the private sector.

“The best types of entities to pay for [credit guarantees] are private entities that have the resources but just don’t have the platform on the ground,” Metzler said. “It’s a really nice match of what they’re doing on the ground commercially and we’re doing developmentally.”

Under the deal with GE, Kenya Commercial Bank will begin offering loans to private clinics, diagnostic centers and hospitals in the next few months. Because USAID will cover up to 50 percent of the loan if a borrower defaults, it expects the bank to be willing to lend to customers who can’t offer much collateral. GE contributed $660,000, which is what USAID will draw on to pay the bank.

Borrowers will be able to use the loans to finance purchase of GE equipment that costs between $25,000 and $1 million.

Metzler says that lack of access to finance for buying expensive medical equipment has been a problem for small and medium-sized health facilities in Kenya. Late last year, Kenyan healthcare workers went on strike to protest shortages of equipment and drugs in public hospitals. However, financing under this deal only covers private providers.

USAID expects that most borrowers will be mid-sized faith-based or for-profit hospitals. The Kenyan bank can make loans of up to $1 million, but USAID expects most to be no more than $200,000.

USAID will guarantee up to $5 million in the bank’s loans over the next 10 years, but expects the default rate to be much lower (overall, it’s less than 2 percent).

The partnership took off after USAID’s local staff and GE representatives kept running into each other last year in Nairobi — “quite literally,” says DCA head Metzler. They were both meeting with the same partners to discuss ways to increase access to credit for smaller health facilities that wanted to buy high-quality medical equipment. The new deal is a win-win, says Metzler, and one that will ideally sustain itself in the long run.

“We know these borrowers are credit-worthy. Once the lender understands there are commercial opportunities for that sector, the guarantee is no longer needed,” he said.

But Monica Onyango, a professor at Boston University’s Center for Global Health and Development, questions whether such public-private initiatives, which allow companies to prioritize what equipment to finance, respond to the most critical needs of the local population.

“There may be some health equipment which is more important than others,” says Onyango, who also spent years working with the Kenyan Ministry of Health and leading global health initiatives in Kenya. “The list should really come from the ground, not the donor.”

Onyango also cautions against importing equipment if it can be produced domestically. This supports the local economy and ensures people can use and maintain the machines, she says.

Metzler says the GE partnership doesn’t displace local production, and “we’d be very sensitive to a deal in which that was the case.” He also says the program responds to a real credit shortage among local health facilities and that GE will train local technicians to service the machines.

GE did not respond to requests for comment from GlobalPost. In a press release, the company said, "GE is proud to partner with USAID and the Kenya Commercial Bank in the development of an innovative financing solution, launched globally for the first time here in Kenya, aimed at increasing access to affordable and quality healthcare."

Since 1999, USAID has entered into more than 300 credit agreements under DCA in nearly every sector. So far, fewer than 20 have been health-related, including guarantees in Georgia, Ethiopia and Uganda. These deals have made more than $3.1 billion in private capital available for more than 139,000 people globally, the agency says.

More from GlobalPost: In Kenya, sex workers want jobs and protection, but not just condoms