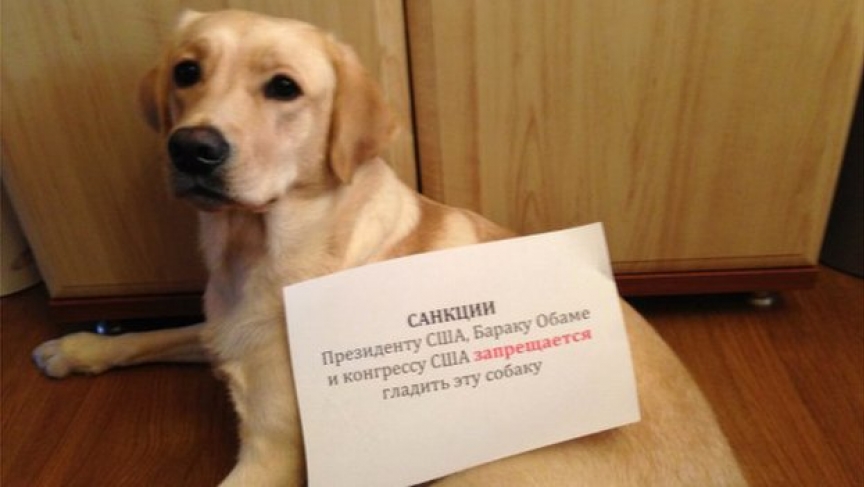 The sign, posted by a Russian social media user, imposes sanctions in response to US sanctions against Russia. "Sanctions - US Congress and US President Barack Obama are prohibited from stroking this dog"

Among the US sanctions on Russia this week, one new restriction targets a specific bank, Rossiya. Washington officials described it as a personal bank for senior Russian officials.

Well, today, President Vladimir Putin seemed to laugh off the new restriction. He said he personally doesn't have an account at Rossiya, but vowed to transfer his money there by Monday.

Putin's not alone in mocking the American sanctions. Many Russians are going online to post pictures making fun of the measures, and of Obama himself.

The BBC's Dmitry Shishkin says many of the pictures show signs that "ban" the US president from doing various things. “For example, Barack Obama being prevented from using a toilet in a particular place, or buying anything in a shop," he explains. "There was even a picture of a yellow lab with a sign stuck to it that read, ‘President Obama and members of the US congress are prohibited from stroking this dog.’”

Shishkin says the social posts are also going in the other direction. Some Russians are making fun of their own government’s response. One showed a photo of US officials covering their faces in sorrow after learning they’d be banned from a vacation in Siberia.

It seems like the pictures come from all across Russia. But there’s always a question about whether the tweets are real, or coming from the Kremlin. Shishkin says, in the past, the government has hired bloggers or used other means to manipulate social media.

“But as far as I can tell, there is nothing to suggest that this is an orchestrated campaign,” he adds, “because the scope [of tweets] was pretty interesting.” He says they came from all sections of Russian society — but says you can never really know about Kremlin interference.

The important part to remember is the tweets went viral. So they’re emblematic of some kind of trend. And that something seems to be Russian pride. There’s swagger in the posts.

Shishkin says the popularity of President Putin is at an all-time high. Russia won the most medals at the Olympics. Russian self-confidence is high. People don’t care what the world thinks of them.

“Russia is becoming increasingly isolationist in its policies,” he says. “And we are probably facing the biggest international crisis since the Cold War.”

In the age of social media, people have choices in the type of media they consume. But Shishkin says Putin galvanized the majority of the country behind him, and there’s a feeling of defiance against the West.

“People are thinking the West has finally started to show its true attitude towards Russia,” he says. “And we need to pull together and oppose it.”