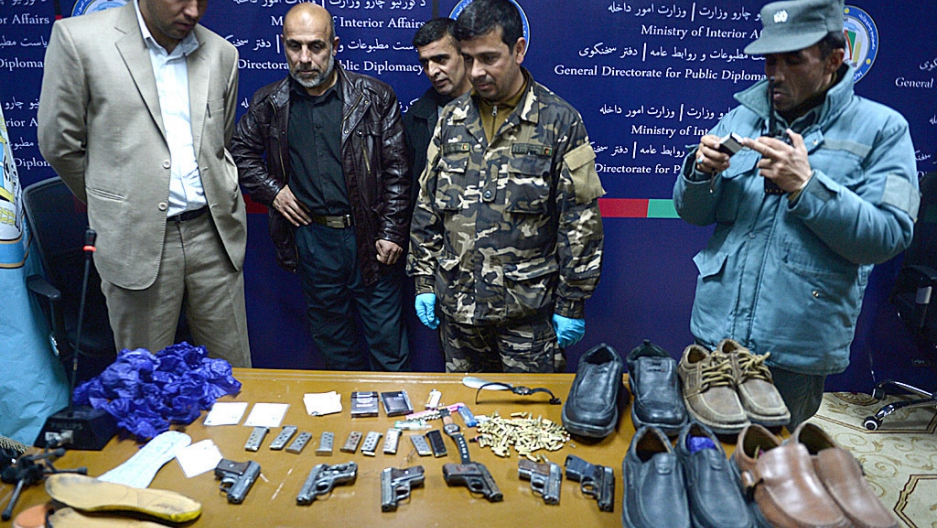 Afghan security officials display weapons and items used by gunmen who attacked the Serena hotel in Kabul on March 20, 2014. At least nine civilians including an Agence France-Presse reporter, two of his children and four foreigners were killed in a Taliban attack on the luxury hotel in Kabul, officials said a day later.
Credit: SHAH MARAI
Share

A journalist who dedicated his career to reporting balanced stories about the Taliban in Afghanistan was among the nine people killed on Thursday when four gunmen attacked a hotel in Kabul.

Sardar Ahmad, 40, his wife, and their two young daughters were shot dead when the young gunmen opened fire at the Serena hotel, a popular meeting place for foreigners and government workers, Agence France-Press reported.

“Ahmad was a well-loved and versatile journalist with a great sense of humor and an eye for unexpected stories that opened a window on life in Afghanistan away from the bombs and blast walls,” the French news agency that employed him said.

Ahmad’s third child was reportedly in critical condition, a group of Afghan journalists said on its Facebook page.

The group called on the Taliban to explain the “cowardly” attack and pledged to boycott reporting all Taliban-related news for 15 days.

“This incident comes despite the fact that Afghan journalists have assiduously tried to remain neutral in their coverage amid difficult circumstances,” the group said.

“The Taliban carry out such attacks, which can never be justified, solely for the purpose of news-coverage and projecting terror among Afghan citizens.”

AFP had noted that Ahmad had "strong contacts on both the government and Taliban sides."

One of the latest photo of our reporter Sardar Ahmad, taken in the #AFP office in Kabul yesterday. RIP pic.twitter.com/AELu2S7YVR

More from GlobalPost: As long as Syria is at war, Iraq has a problem

The gunmen reportedly stashed handguns inside their shoes to evade security at the hotel, according to Reuters.

They hid inside the Serena for three hours before opening fire in the restaurant.

“I never heard an explosion or anything. Only firearms and possible rocket-propelled grenades,” a senior United Nations official told Reuters via text message.

Foreigners, including two Canadian aid workers, were also among those killed. Reuters reported that the others were from New Zealand, Pakistan and India.

The attack came as many in Afghanistan celebrated Nowruz, or the Afghan or Persian New Year.

“Many of these people dedicated their lives to helping everyday Afghans build a better country for themselves, including education, and enhancing the role of women and girls in Afghan society,” Canada’s Foreign Affairs Minister John Baird said of the victims of the attack.

“For this selfless work to be met with violence, especially on the occasion of Nowruz, just further proves the depravity of the Taliban and those who support them.”

An Afghan Interior Ministry official initially reported all foreigners were safe after the attack on Thursday.

The investigation now shifts to security failures at the hotel, The Wall Street Journal reported. Investigators want to know if the young gunmen had help inside the hotel.

Earlier reports described the gunmen as "teenage," but the Afghan ID cards of three of them identified them as in their 20s.

The Taliban has vowed an escalation in attacks ahead of a presidential election slated for April 5.