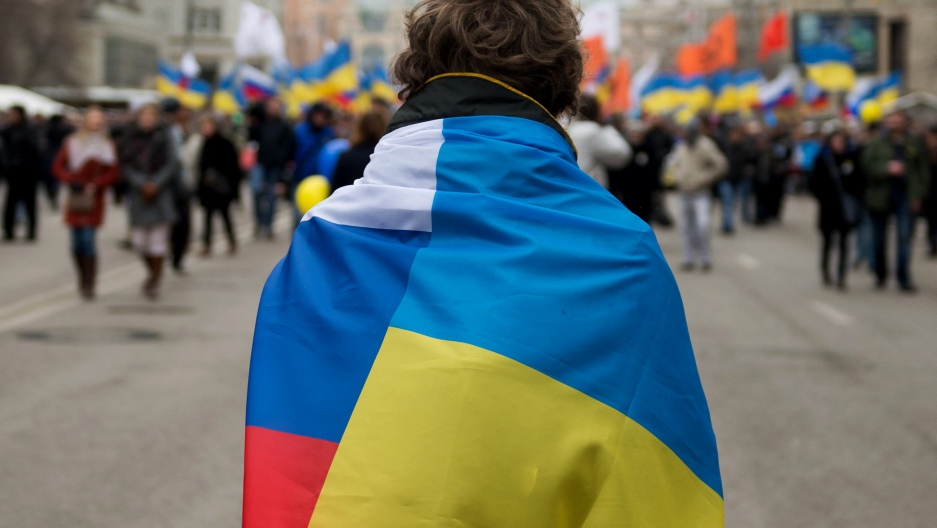 Tens of thousands rallied in Moscow last week against Russia's annexation of Crimea. But 80 percent of Russians support the move.
Credit: AFP
Share

MOSCOW, Russia — Russia's move to annex Crimea may have sent the patriotic masses here into a jubilant frenzy, but it’s left the small community of liberals and opposition activists wringing hands over worries about a future of growing isolation and authoritarianism.

“You hear this word ‘totalitarian’ when people share their anticipations about the future,” says Masha Lipman of the Carnegie Moscow Center. “I would say there’s no disagreement that harder times are in store.”

Social media has been awash with expressions of gloom and shame. “People! What’s happened to our country?” Yuri Timofeyev, a photographer for the news website Grani.ru, wrote on Facebook after Russian troops invaded Ukraine’s Black Sea peninsula. “Fallen apart?”

President Vladimir Putin’s signature on Friday finalized Russia’s fast-track annexation of Crimea, condemned by most of the international community and punished by the West with sanctions against his inner circle.

The EU added 12 more Russian officials to its list shortly after, including the powerful deputy Prime Minister Dmitry Rogozin and two Putin aides.

But on the home front, Putin’s confrontation with the West has earned him his highest ratings in years by playing to the conservative sentiments he’s cultivated since returning to the presidency two years ago.

Russians have been treated to a heavy-handed state-run media campaign of imperial nostalgia and historical revisionism aimed at portraying Crimea — which holds a special place in the collective imagination here — as Russia’s rightful property.

Almost 80 percent of respondents said they supported annexing Crimea in a survey conducted earlier this month by the independent pollster Levada Center.

The same poll found 58 percent backed sending Russian troops into Crimea and other regions of Ukraine, including the east, where unrest continues to simmer.

That’s unsettling Moscow’s chattering classes, which see a darker side to Putin’s ambitions.

He has “cynically raised nationalist fervor to a fever pitch; imperialist annexation is a strategic choice to bolster his regime’s survival,” Alexei Navalny, Russia’s most prominent opposition politician, wrote in The New York Times on Wednesday.

“Mobilizing the masses by distracting them from real problems like corruption and economic stagnation can take place only beneath the banner of fighting external enemies.”

Among those enemies are Ukraine’s fledgling post-revolutionary authorities, now scrambling to reassert control over a divided country in the wake of a protest movement partly spearheaded by nationalist groups painted here as “Fascists.”

Moscow’s campaign to win back Crimea has included appeals to locals there touting Russia’s political stability and brighter economic future.

Critics here in Moscow argue the Kremlin’s land-grab is being presented through rose-colored glasses.

“You will no longer choose — nothing, never,” he wrote in the magazine Snob. “Not even the colors of the curb in your courtyard.”

As the geopolitical drama unfolds in Ukraine, the independent media at home is being subjected to largely underreported crackdown.

Earlier this year, TV Rain — Russia’s only critical-minded television station — was dropped by major cable providers after it aired a poll asking viewers whether the Soviets should have surrendered St. Petersburg, then called Leningrad, during its brutal 900-day siege at the hands of Nazi Germany during World War II in order to save countless lives.

Kremlin-loyal bureaucrats lashed out over what they called an affront to historical memory.

On Thursday, reports suggested that TV Rain may be kicked out of its studios in a sprawling central Moscow complex that houses much of the remaining independent media.

Meanwhile, the well-respected editor of a major news website, Lenta.ru, was fired last week after her outlet published an interview with a leading Ukrainian nationalist whose militant right-wing group played a key role in the protests. Russian police have charged him in absentia with “extremism.”

The editor, Galina Timchenko, was replaced by a Kremlin-friendly journalist while much of the staff resigned in protest.

More from GlobalPost: 12 photos that explain why Russia is so crazy about Crimea

Lipman, the Carnegie researcher, says the independent media sector is “noticeably shrinking” thanks to such measures.

“For someone who has lost a job with a decent publication — by decent, I mean guided by professionalism and not a desire to please the Kremlin — there are fewer and fewer opportunities,” she says.

That’s part of a broader development of state-enforced patriotism aimed at breeding loyalty to the Kremlin, Lipman adds.

If there were any doubts, one need only look at Navalny, who was arrested last month and placed under house arrest for two months. His immensely popular blog — where he’s uncovered graft and lavish spending by the members of the country’s ruling class — was blocked last week after he criticized Russian policy in Crimea.

Perhaps most telling, however, has been the fate of Roman Romanenko, an otherwise unnoticed journalist in the Vologda Region— about 300 miles northeast of Moscow — who jokingly appealed to Putin send in troops to protect the Russian speakers in his region.

Moscow’s incursion into Crimea was launched under the pretext of protecting ethnic Russians and Russian-speaking residents from an allegedly predatory government in Kyiv.

“Our sick are unable to obtain the medicine and treatment they need, the level of our education drops every year, children's after-school programs are being shut down, agriculture has been virtually destroyed,” Romanenko wrote on Facebook.

“We are suffering very much.”

The humor apparently didn’t register with the regional governor, who requested that Romanenko be investigated over his appeal.