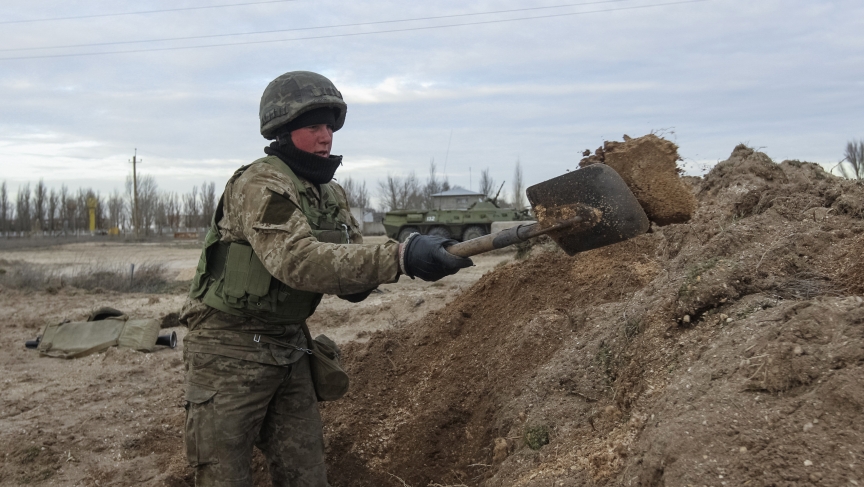 A Ukrainian serviceman digs a trench at a checkpoint facing Russian-occupied Crimea. Ukraine's small frontier detachments would have difficulty stopping an all-out Russian attack, but would more likely be by-passed and isolated.

War is not inevitable in Ukraine, but both sides are busy taking precautions.

Ukrainian troops are digging in along key points on the border with Russia. Across the frontier, Russia is concentrating its own forces, including mechanized and airborne brigades.

So if the confrontation leads to war, here's how the two sides stack up. And it's not even close.

The ancient Greek historian Thucydides noted that war is a matter not so much of arms, as of money. And that's especially true in any conflict between Russia and Ukraine.

Ukraine is broke. It has been broke pretty much since independence in 1991. Russia, on the other hand, is flush with money from its flourishing oil and gas exports. Russia has three times the population of Ukraine, but its GDP was 11 times larger in 2012. And Russia spends at least 30 times as much on its military as Ukraine; perhaps 60 times as much.

That spending differential means Russia has been able to invest in new weapons systems in every branch of its military. Its equipment is more modern, more efficient and more deadly. It has also been able to spend more on training, so its forces are at a higher level of readiness.

Neither country publishes much information about the composition of their armed forces, tables of organization or equipment. Some details are reported under international treaty requirements, but most are estimates from think tanks like the International Institute for Strategic Studies (IISS) in London.

Ukraine inherited a large proportion of its equipment from the old Red Army when the Soviet Union disintegrated in 1991. And there have been few significant improvements since then. For example, by the best estimate, Ukraine has 10 upgraded T-84 main battle tanks in service. Almost all of the other tanks are obsolete T-64s — some of them 50-years-old. Maybe half of the country's tanks are in mothballs.

Similarly, Ukraine's air force is relatively respectable on paper, but hampered by obsolescense and inefficiencies from lack of money and training. It would likely be quickly neutralized.

Ukraine does have one key area of strength. It has an integrated air-defense system, which could be expected to impose a cost on Russian planes. And it has excellent missile technology.

In terms of manpower, Ukraine is again at a disadvantage. Since 2000, it has been moving toward an all-volunteer force. Conscription was finally phased out last year. The net result is that Ukraine now has a smaller pool of trained reserves, many of whom are older men.

This month, the government announced the creation of a 60,000-strong volunteer "National Guard" to supplement the army, but it will take time to train them.

And then there's the question of whether the many ethnic Russians in the Ukrainian armed forces will stay loyal. No one is expecting mass defections, but it only takes the loss of one or two key officers to compromise the defense of any particular region.

The border between the countries is huge and composed of wide open plains, with almost no defensible terrain. Russia's airborne and mechanized forces could simply bypass the Ukrainian troops currently dug-in along a few frontier roads.

Ukraine may have more luck defending urban areas, especially if there's significant popular support. That's where National Guard volunteers might be most useful.

Even lightly armed irregular forces can be a major problem for any army, as the United States discovered in Fallujah, and the Serbs in Sarajevo. However, Russia might be able to counter with popular militias of its own, especially in east and south Ukraine where most ethnic Russians live.

Stategically, the Ukrainians are also in a bind. The only defensible line in Ukraine, in terms of a natural obstacle, is the Dneiper river. But the Dneiper runs through the middle of the country, so using that line would mean abandoning the east and south of the country.

So in terms of a conventional military analysis, Ukraine has few options. None of them good. And the chance of military assistance from overseas is negligible.

In purely military terms, then, Moscow can re-draw the border pretty much anywhere it wants east of the Dneiper. However, the Kremlin must also take into account international reaction — especially the reaction of the markets. The ruble, for example, has already taken a beating since the crisis began.

Another giant incalculable factor is the issue of pipelines. Russia depends financially on exporting oil and, in particular, natural gas to Europe. Many of the pipelines that carry Russia's gas to Europe pass through Ukraine. Ukraine could interrupt that supply, but then it would also lose its own source of energy.

Such a disruption could also cause economic chaos in Europe. Russia could use that threat of disruption to make European powers submit to its will.

An all-out war seems unlikely. But it's impossible to know how far Vladimir Putin wants to pursue his irredentist dream of reuniting ethnic Russian populations who "woke up abroad" after the Soviet Union collapsed in 1991.

If he does indeed want to annex the pro-Russian regions of eastern and southern Ukraine, then the "Crimean model" of ambiguous infiltration and minimal force, combined with "popular" local support, seems to be the most likely tactic. And its mechanized brigades could be kept waiting over the border. Just in case.