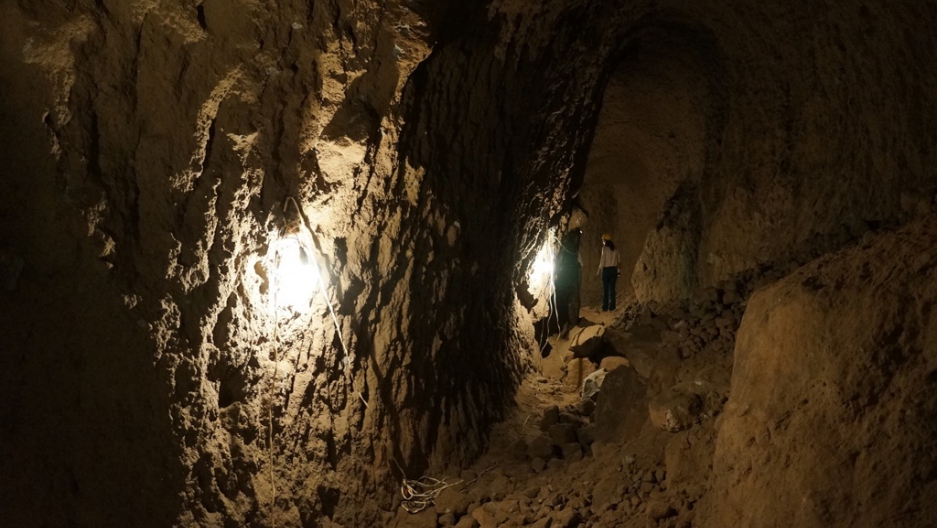 MEXICO CITY — With all the crime, pollution and traffic, life has been shaky on the teeming streets clinging to Mexico City’s hilly southwest side.

This week there's a reminder just how precarious things can be.

City officials have discovered a yawning cavern just below the surface of a vital intersection, clawed out by gushing water from a busted storm drain.

Officials are warning that traffic and pedestrians could be sucked into a sinkhole. They’ve closed off roads running past one of Mexico’s busiest inter-city bus terminals and are at work repairing the broken sewer line and the hole that it’s carved — a cavern estimated to be about four stories deep.

“We’ve always been afraid that the earth could collapse beneath us,” said Rosalia Orozco, 63, who’s lived here for half a century. “It’s strange to me that they didn’t take into account the conditions here before they built so much.”

“Here” is the borough of Alvaro Obregon. Its 720,000 mostly working class residents make it among the most crowded of Mexico City’s 16 boroughs and, officials say, one of its more geologically challenged.

The borough occupies ridgelines that rise from the onetime lake bed upon which the capital center stands. The borough is sluiced by flood-prone canyons and gullies in which thousands of poor families have built makeshift, haphazard homes.

A gunpowder factory owned by the Mexican army sits in the center of one neighborhood. An oil storage facility occupies another.

The above video was published Wednesday by Mexico's Milenio.com news site.

But most worrying to residents and some officials are the many miles of abandoned sand and gravel mines — no one knows exactly how many exist or how extensive each is — bored ant-like beneath the homes of as many as 250,000 people.

“The mines are a problem we’ve always had here,” says Georgina Pineda, spokeswoman for the borough government. “We live with these risks every day.”

Most Mexico City dwellers know the dangers go way back.

Hundreds of years ago, this megacity was the Aztec capital of Tenochtitlan. It was a whole lot smaller, and perched on islands in a sprawling, shallow lake.

Spanish colonists drained the lake, reversed the streams feeding it, and built their own capital.

That hobbled the city with hydrological horrors and an unstable, soft-soiled foundation that haunt it still.

Over three decades of quickly swelling population beginning in the 1940s, the mines of Alvaro Obregon provided raw material for a concrete-heavy building boom across Mexico City’s metropolis, now home to some 23 million people.

The construction companies didn’t keep maps or other records of the mines they dug. City officials never discouraged newcomers from settling atop the array of abandoned mine shafts.

Some two-thirds of the 30-square-mile borough now sits above the abandoned mines, officials say.

“In those days there were no regulations impeding urbanization,” Alfredo Alanis, public works director for Alvaro Obregon, says of the 1970s, when most of the neighborhoods were built. “We don’t have a count of how many mines there are. Some are underneath three entire neighborhoods. Others are only a block long.”

A collapsing mine shaft forced the demolition of a dozen houses and threatened to swallow more than 300 others in one neighborhood in 2007.

Another sinkhole nearby consumed two more houses in 2011. Still another that suddenly gaped on a street last summer has spared homes so far.

“There was nothing here when I first arrived. Just fields and mine shafts,” says Orozco, who moved here with her family from the countryside in the 1960s. “If there are caverns beneath all of this, how can we not have collapses?”

City crews have filled in about 900 mines with rock and concrete in recent years, Alaniz says. The work continues as new shafts are discovered, usually when cracks appear in the walls of an affected building or a hole suddenly yawns in a street or yard.

The sinkholes are a constant worry, Orozco and other residents say. Earthquakes pose another one entirely.

In addition to the tunnels, gravel and sand were excavated from broad open pit mines. Developers later filled the pits with rubble and built houses upon them. That’s made for a jiggly life for homeowners.

“When there is an earthquake the ground here shakes like jelly,” says Leticia Cruz, 50, whose family’s restaurant overlooks the intersection where the newest cavern was discovered early this month.

Unstable landfill soil ikely caused the large storm sewer — the one that created the latest cavern — to break some years ago, officials say. City engineers say they’re not yet sure how far the hole extends under the streets and toward nearby houses.

While engineers calculate the fissure is about 45-feet deep, they do not yet know how far it extends horizontally.

“If this has been going on all this time and they didn't know anything, what can we expect?” says Miguel Hernandez, 30, who sells fruit cocktails from a pushcart across the street from where work crews are digging to reach the broken pipe. “We won't know anything until it pulls us below.”