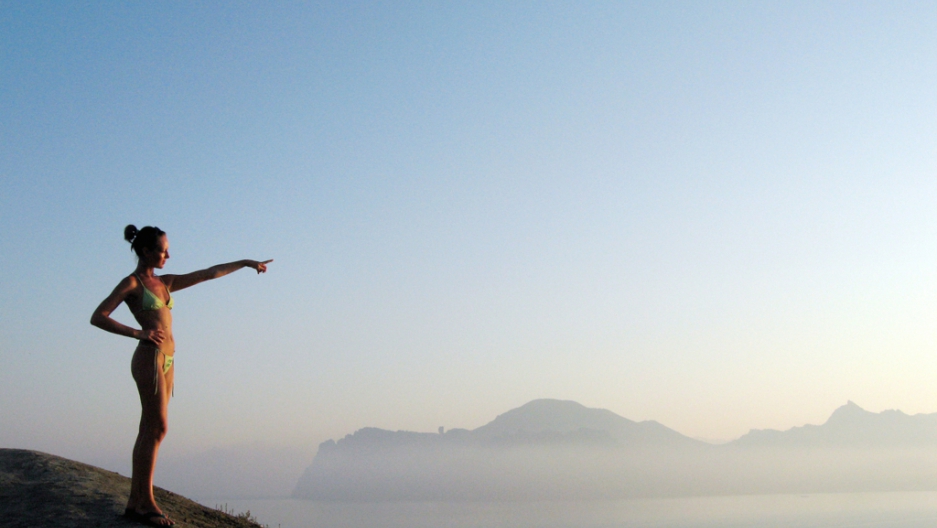 A tourist points as she enjoys a view during sunset from atop a hill near the popular Ukrainian Black Sea resort of Koktebel, Crimea on August 1, 2010. AFP PHOTO/ SERGEI SUPINSKY (Photo credit should read SERGEI SUPINSKY/AFP/Getty Images)
Credit: SERGEI SUPINSKY
Share

For a small peninsula, Crimea casts a long shadow. It has required treaties, inspired poems, started a war, and more than once witnessed history in the making. Not bad for a territory roughly the size of the state of Maryland.

If Russia thinks it can lay claim to Crimea's future, it's because it already lays claim to its past. When, earlier this week, Russian President Vladimir Putin told parliament to accept Crimea's request to join Russia, he said that "everything in Crimea speaks of our shared history and pride."

We bet the Greeks, the Turks and the Tartars who all called Crimea home would have something to say about that, but we'd agree with Putin on one thing: Russia has wanted Crimea a long, long time. Here's why.

1. It's where Russia became Christian.

Antique ruins and the Cathedral of Saint Vladimir in Chersonesus. (George Chernilevsky/Wikimedia commons)

In 988, Prince Vladimir — later Vladimir the Great, and even later Saint Vladimir — entered the ancient city of Chersonesus, on the southwest of the Crimean Peninsula, a pagan. He left it an Orthodox Christian. He was baptized there by Byzantine bishops and carried his new religion back to the lands he ruled. Slavic idols were razed, churches were founded and residents converted en masse, notably the entire city of Kiev (whose people were instructed to take a redeeming dip in the waters of the River Dnieper or risk facing the prince's wrath). From that moment on, Orthodox Christianity was the official religion of his realm — and of the empire it became. In the words of another Vladimir — Putin — that choice the prince made in Crimea was the foundation of "the culture, civilisation and human values that unite the peoples of Russia, Ukraine and Belarus."

2. Russia fought for it.

Niftily annexed from the Ottoman Empire at the end of the 18th century, westward-facing, sea-locked Crimea was one of Russia's most strategic territories. It was the jumping-off point for its attempted expansion across the Black Sea, and the catalyst for one of recent history's most devastating conflicts. The Crimean War gave Russia up to one million deaths, a powerful new set of enemies, and some of its most enduring legends of battlefield bravery. No wonder Putin name-checked the sites of the war's most famous contests — Sevastopol, Balaclava, Malakoff — in his speech. "Each one of these places is dear to our hearts," he said, "symbolising Russian military glory and outstanding valour."

3. It's where Russian royalty chose to spend their summers.

Vorontsov Palace, near the town of Alupka. (Derevyagin Igor/Wikimedia Commons)

For many years, Crimea was the jewel in the Russian empire's crown: mountainous, temperate, bathed in turquoise waters, it's where the tsars would come to escape the freezing winters and blistering summers of mainland Russia. They made the peninsula a playground of palaces, resorts, spas and vineyards (it's on the same latitude as the south of France and grows its own "Crimean champagne"). It was Russia's paradise; it became its paradise lost.

4. It's where some of Russia's greatest literature was written.

Without this modest house near Yalta on Crimea's south coast, Russia's literary canon arguably wouldn't be the same. It was here, at the White Dacha he'd had built as a retreat, that Anton Chekhov wrote 'The Cherry Orchard,' 'Three Sisters,' 'The Lady With the Dog' and other masterpieces. It was here that he invited other Russian giants of literature, theater and music, including Leo Tolstoy, Maxim Gorky and Sergei Rachmaninoff, to stay. He wasn't the first to find inspiration in Crimea: the poets Maximilian Voloshin, Marina Tsvetaeva, Sergei Efron, Anna Akhmatova and Osip Mandelstam all spent time there, turning a tiny Crimean village into an artists' colony and penning odes to the peninsula's scenery.

5. It's where modern Europe began.

It's a measure of how proud Russia was of Crimea that it chose Yalta as the venue for one of the most important meetings of the 20th century. When the Allies were redrawing the map of Europe after the catastrophe of World War II, Josef Stalin was determined that the momentous decisions would be taken in Russia. And where better than Crimea's sumptuous Livadia Palace, the summer retreat of the last tsar, to display to Britain and the US the Russian history, might and prestige that Stalin hoped to project? That week in Crimea quite literally changed the course of Europe, and the world.

Outside the Bolshevik Cinema in Simferopol, during the 1950s.(AFP/Getty Images)

It took just eight lines on the front page of the official Communist Party newspaper to turn Crimea from Russian to Ukrainian. That's how, in February 1954, the Soviet Union's Communist leadership, headed by Nikita Khrushchev, announced their decree that the territory would be given as a sort of anniversary gift to Ukraine to celebrate 300 years since Ukrainians agreed to join the Russian tsardom. There may have been deeper reasons behind it — a convenient way to replace the native Tartar population, exiled en masse by Stalin, with impoverished Ukrainians, for one — but most historians conclude that the gesture was, at the time, "essentially meaningless." Crimea, Ukraine, Russia — they were all part of the same Soviet Union. It was only when that union broke up that Russia truly lost Crimea. And that still hurts, at least to listen to President Putin: calling the 1954 transfer unconstitutional, he claims that Russia "was not simply robbed, it was plundered."

7. Many of its people never stopped feeling Russian.

Russian blood runs deep in Crimea. Ethnic Russians make up its largest population group and many of them have loudly declared themselves more Russian than Ukrainian throughout the various permutations in the region's status. In 1994, for instance, Crimean voters elected a pro-Russian president, Yuri Meshkov, who promptly sought to place the republic under Russia's wing. The Ukrainian parliament judged his actions unconstitutional and, in 1995, sent forces to remove him (it also abolished the post of Crimean president for good measure). The picture above shows how Meshkov's supporters took it.

8. It's where Russians go on vacation.

If Crimea was once the pleasure garden of the tsars, in the brave new Soviet world it became the number one leisure resort of the masses. For many years the peninsula's population more than doubled in summer, when hordes of vacationers would descend from all corners of the USSR. Meanwhile the Communist Party's top brass kept luxury private villas for themselves; Mikhail Gorbachev famously had his summer residence there. The visitors declined after the break-up of the Soviet Union, but tourism remains one of Crimea's biggest sources of income. And never underestimate the power of nostalgia: in 2009, the Ukrainian government was forced to step in to save a struggling summer camp in Crimea under pressure from former Soviet youths who'd spent their vacations there, including influential Russians.

9. It's the home of Russia's Black Sea Fleet.

Crimea's ports may not have the strategic importance they had all those centuries ago, but they're still pretty darn handy for Russia. Its Black Sea Fleet is based in the port of Sevastopol, where public celebrations mark "Russian Navy Day" each July. The arrangement has been the source of wrangling between Russia and Ukraine for years, with Ukrainian President Viktor Yushchenko declaring in 2009 that the Russian base was a destabilizing influence in the region and would not be allowed to remain beyond 2017. However, his pro-Russian successor, Victor Yanukovych, renewed the lease through at least 2042 in exchange for a discount on Ukraine's gas bills. This year, the Russian fleet proved just how destabilizing it could be when its commander allegedly issued an ultimatum to Ukrainian forces in Crimea to surrender or face attack, though Russian officials denied it.

A man gestures during an anti-NATO rally in Sevastopol, May 4, 2005. (SERGEI SVETLITSKY/AFP/Getty Images)

"We have already heard declarations from Kiev about Ukraine soon joining NATO," Putin declared on March 18. "What would this have meant for Crimea and Sevastopol in the future? It would have meant that NATO's navy would be right there in this city of Russia’s military glory, and this would create not an illusory but a perfectly real threat to the whole of southern Russia." Leaving aside the fact that a) NATO probably doesn't plan to attack "the whole of southern Russia" anytime soon, and b) Ukraine's leaders have categorically denied making any overtures to NATO, Putin's hysterics should give you an idea of how much Russia really, really doesn't like the idea of NATO gaining any ground in the east. And whereas polls have indicated that most Ukrainians don't share its fears, in Crimea some 51 percent of people surveyed said they considered NATO a threat. That sentiment has been borne out in anti-NATO demonstrations on occasions when member states have sailed their ships into Crimean waters. That's handy, because in 2008 Putin hinted that if Ukraine became a NATO member, Russia would act to protect its interests in Crimea — potentially by annexing it.

And gas, for that matter. Crimea's leaders claim the territory has "one of the largest oil and gas deposits in the Black Sea region." It currently extracts "about 1.5 billion cubic meters of gas a year," according to Deputy Prime Minister Rustam Temirgaliev. Foreign firms including Royal Dutch Shell and Italy's Eni have signed deals for exploration rights to the reserves they hope lie offshore, though these could be in doubt following the upheaval of the past month: there are reports that Shell has pulled out of its agreement amid reports that Crimea's government plans to nationalize its oil and gas fields and allow Russia's state-controlled Gazprom to develop them. Gazprom had submitted a proposal within two days of Crimea's secession referendum.

National Geographic calls Crimea "a jewel in two crowns." It's a place of spectacular natural beauty where people have wanted to live for millenia. We doubt that Putin decided to occupy Crimea for aesthetic reasons; but now that he has, and the peninsula is set down a new and risky course, it just seems worth remembering.