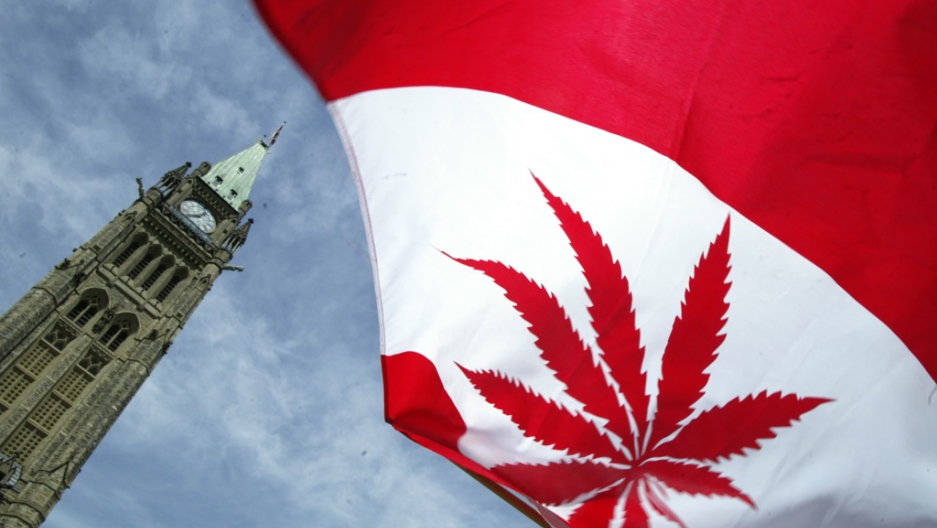 A Canadian flag with a marijuana leaf flies alongside Parliament Hill in Ottawa, Canada during a pot legalization rally.
Credit: Donald Weber
Share

MONTEVIDEO, Uruguay — In about a month, Uruguay’s revolutionary new cannabis law will go into effect. In addition to allowing citizens to grow, buy and sell weed, the government will also set forth on its mission to grow its own fields of marijuana, which will then be harvested, taxed and sold in neighborhood pharmacies.

At least, that’s the theory.

But growing weed takes a while. Cultivating fields of it, figuring out how to keep the fields safe from poachers, harvesting vast amounts of cannabis, packaging it, taxing it, distributing it and selling it take even longer.

"I think that we’re going to buy it from Canada, because that’s where the best quality is," Uruguay's first lady Lucia Topolansky tells GlobalPost.

Long story short: Uruguay’s government is not going to be producing much of its own cannabis any time soon. So, where is the official stash going to come from in the meantime?

According to senior-ranking officials in the ruling Broad Front Party, including Sen. Lucia Topolansky, who’s also Uruguay’s first lady, Canadian medical marijuana producers could provide this tiny Latin American nation with a stopgap until it figures out how to grow and harvest its own crop.

“To start with, we will have to buy cannabis,” Topolansky said in an interview last week. “I think that we’re going to buy it from Canada, because that’s where the best quality is.”

To be clear: This is still just an idea. Neither country has announced a deal to ship pot from Vancouver to Montevideo. A spokeswoman for Health Canada wrote by email, “There are currently no plans to encourage the export of cannabis to Uruguay or any other country.”

But could it happen?

1. Does Canada have weed to sell?

Under Canada’s latest medical marijuana laws, there are about 10 companies currently licensed to grow pot. Marc Wayne, president of Toronto-based Bedrocan Canada Inc., one of the biggest suppliers, said the companies are struggling to meet demand inside Canada.

The Canadian law governing medical marijuana has a provision that allows the government to issue export licenses to growers. However, the authorities will not start issuing export licenses until they're satisfied Canadians have access to all the pot they need.

“There won’t be any export to Uruguay, or anyone else, any time soon,” Wayne said.

In short: Probably not, at least not from Canada to Uruguay.

The Uruguayan government has announced a lofty goal to sell cannabis at $1 a gram. That’s the price point at which it will be competitive against the black market, national drug czar Julio Calzada has said.

On the streets of Montevideo, poor quality pot, most of it from Paraguay or Brazil, currently sells at about $100 for 25 grams, or about $4 a gram, according to research by Insight Crime.

In Canada, weed is much more expensive than that. Currently, a gram of medical pot sells for a minimum of about 7.60 Canadian dollars a gram (about $6.80), said Steve Thomas, general manager of the Whistler Medical Marijuana Co. His company’s cannabis, which is grown organically, sells for about CA$10 a gram (about $8.95).

Once the cost of shipping and jumping through regulatory hurdles is taken into account, it probably wouldn’t make sense to export to a country like Uruguay, where disposable income is low compared with more developed countries, Thomas said.

He said his company is certainly eyeing the export market, but he’s looking at countries with higher incomes, such as the Czech Republic or Israel, as possible targets for growth.

A worker packs medicinal cannabis at a growing facility in Israel, one of the world's centers for scientific study of the drug. (AFP/Getty Images)

There’s no easy answer to this. Two shipping lawyers GlobalPost contacted both explained that shipping marijuana is illegal under different United Nations conventions on transporting narcotics. But one company, Dutch-owned Bedrocan, is already shipping cannabis as a pharmaceutical.

The Canadian government has given permission to Bedrocan BV in the Netherlands to ship cannabis, via a government agency, to its Canadian counterpart, Bedrocan Canada Inc. The shipments have also been approved by the UN’s International Narcotics Control Board (INCB) in Vienna, said Tjalling Erkelens, the owner of Bedrocan BV. The UN body approves a certain amount of narcotics for each of its member countries to import and produce based on INCB estimates of need. (The INCB didn't immediately respond to a request for comment sent Wednesday.)

Any company in Canada hoping to export cannabis to Uruguay would need permission from both countries’ governments, as well as approval from the INCB for Uruguay to import cannabis, Erkelens said, adding that the INCB has already said it’s not happy with Uruguay’s marijuana “experiment.”

4. How would the pot get to Uruguay, and would the US intervene?

In short: Probably via a small boat, and probably not.

First, logistics: If Canada’s growers were to export weed to Uruguay, they’d likely use converted fishing boats or smaller vessels rather than big container ships, according to Craig H. Allen, a professor at the University of Washington School of Law who specializes in shipping law.

That’s important because a smaller boat would have to stop at least once on the way south to refuel, Allen said. And that means Uruguay and Canada would need the cooperation of a third country, probably a Caribbean island nation, he added.

Landing a vessel full of cannabis at a US port would almost certainly result in seizure of the vessel, said Tina Loverdou, a lecturer in shipping and insurance law at Queen Mary, University of London. That could pose a problem for a boat that hit bad weather or other trouble on the voyage south.

“If the ship was in major danger and needed refuge, the third country might say ‘you can’t enter my territorial waters,’” Loverdou said.

If the shipment was legally sanctioned by both Canada and Uruguay, the legal experts say it would be unlikely for the United States or other countries to intervene if the ship stayed in international waters.

As for quality: Keeping weed fresh over long distances isn’t a problem, said Mark Kleiman, public policy and marijuana expert at the University of California, Los Angeles. Even newly harvested cannabis would stay fresh over a weeklong journey south, he said.

There’s a legal framework out there to ship cannabis from Canada to Uruguay.

Theoretically, licensed Canadian pot producers could get to the point where they have enough excess weed to sell it south. But the economics would probably get in the way, with companies having to jump through legal hoops, only to export a product to a country at far higher prices than the weed already available there.

Kleiman, the UCLA professor, said it’s much more likely that Uruguay ramps up its own production long before the international pot trade grows into a viable model.

“The Ministry of Agriculture just needs to put up a greenhouse today,” he said. “Marijuana is a cheap and easy crop to produce.”

People demonstrated for legalized marijuana in front of the Legislative Palace in Montevideo on Dec. 10, 2013, as the Senate discussed a law to do just that. (AFP/Getty Images)