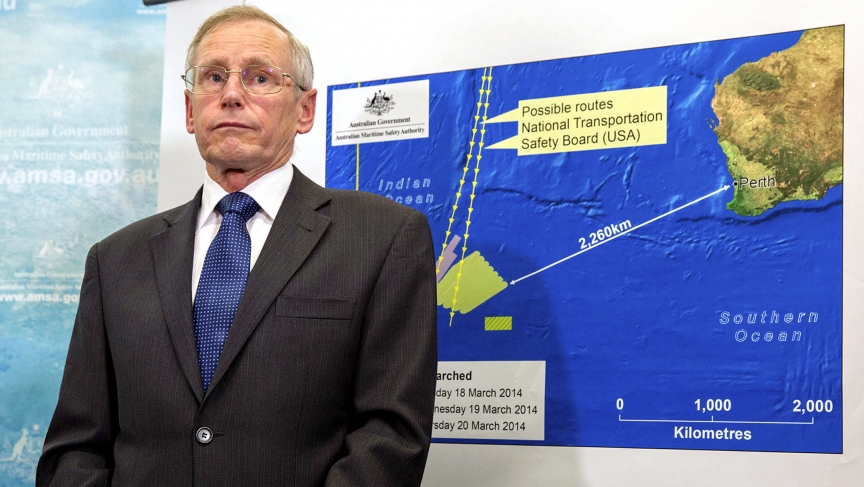 John Young, general manager of the emergency response division of the Australian Maritime Safety Authority, stands in front of a diagram showing the search area for Malaysia Airlines Flight MH370 in the southern Indian Ocean, during a briefing in Canberra on March 20, 2014.

It was a tantalizing moment when Australia released satellite photos of two objects floating in a remote area of the southern Indian Ocean. But the day ended with search aircraft returning to base with no solid evidence of having located debris from the missing Malaysia Airlines jet.

Still, those satellite images could lead to a significant breakthrough.

“It's probably the best lead we have right now,” said John Young early on Thursday. Young manages the emergency response division of the Australian Maritime Safety Authority. But he went on to warn that those satellite pictures might turn out to be unrelated to the missing Boeing 777.

Nonetheless, search planes from the US Navy, from Australia and New Zealand fanned out over the section of ocean where the debris was spotted from space. They searched an area about 1,500 miles west of the Australian coast.

“The area we were searching was closer to Antarctica than it is to Australia,” David Wright of ABC News, who was on one of the search planes, told the BBC. “The search was very remote. It took three hours just to get there.”

Wright said the US crew was pursuing what they thought was a promising lead, which was a satellite image of what appeared to be a 78-foot long piece of debris floating on the water's surface.

“It was there,” Wright said. “It's not there anymore.”

At least, the search plane was not able to find the debris today in a section of ocean more than 4,000 square miles in size.

Wright said the military aircraft flew in a lawnmower pattern, back and forth, back and forth, for about three hours, “with watchers on each side of the plane looking out the windows and radar scanning a 16-mile radius.”

It did come across one ship and a few groups of dolphins. But nothing that looked like it came from flight MH370.

Wright said the flight crew was confident that it had searched this particular patch of ocean thoroughly. “However, we're talking about an entire search area that is about the size of the state of Arizona,” Wright said. That is more than 100,000 square miles in total.

The search will continue on Friday. Past experience says that if the Malaysian Airlines plane did indeed crash somewhere in this swath of ocean, parts of it might very well be floating on the surface, where search aircraft or ships could find them.