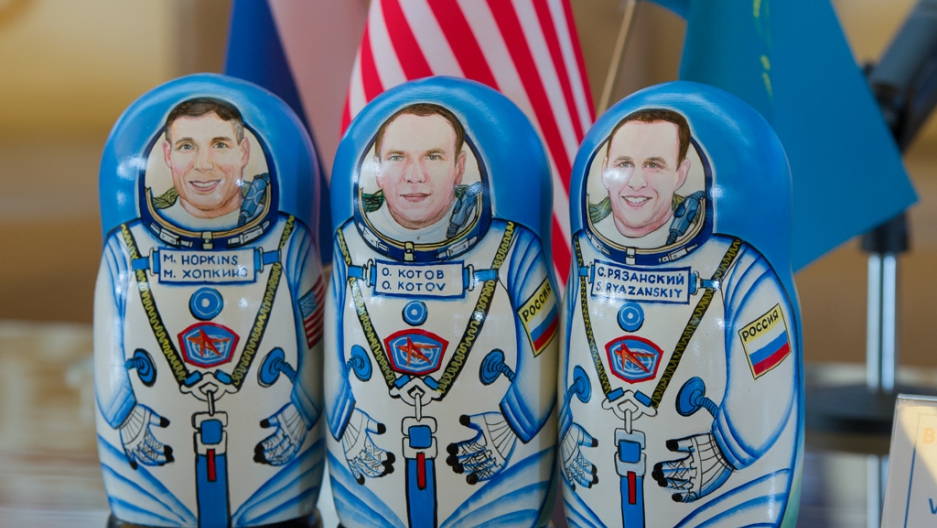 March 11, 2014: A set of matryoshka dolls depicting the Expedition 38 crew, Flight Engineer Mike Hopkins of NASA, left, Commander Oleg Kotov of Russian Federal Space Agency, Roscosmos, center, and Flight Engineer Sergey Ryazanskiy are seen at a welcoming ceremony held at the Karaganda airport in Kazakhstan. The crew of three landed in their Soyuz TMA-10M spacecraft a few hours earlier near the town of Zhezkazgan, Kazakhstan after spending five and a half months onboard the International Space Station where they served as members of the Expedition 37 and 38 crews.
Credit: NASA/GCTC/Andrey Shelepin
Share

Tensions between Russia and the United States are at their highest point since the end of the Cold War. On Sunday, while Crimea voted overwhelmingly to join Russia, a Moscow TV host reminded the world that Russia was "the only country in the world capable of turning the USA into radioactive dust."

Despite what’s happening on the ground, there’s one place that remains above all this fiery rhetoric: space. While most people know of the historic competition between the two nations, the modern era has created a strong cooperative bond between NASA and its Russian civilian space agency counterpart, Roscosmos.

“It doesn’t appear that we are affected by what’s going on diplomatically with the Russians,” said Al Sofge, director of NASA’s Human Exploration and Operations Division. “I don’t know that we’ve ever even discussed it.”

It seems that astronauts and cosmonauts aboard the International Space Station (ISS) — a 15-nation partnership — are too busy conducting awesome science experiments in microgravity and taking mind-blowing photos and videos of Earth to be worried about geopolitical posturing over Ukraine.

On March 10, even as Russian gunmen took over key military installations in Crimea, Russia and the United States were partnering to bring three ISS crew members back to Earth: Russian Oleg Kotov (a Crimea native), Russian Sergey Ryazanskiy and American Mike Hopkins.

The ISS — continuously occupied for 13 years — has weathered multiple international crises, including the 2008 Russian-Georgian war, the ongoing Syrian conflict and the recent US-Russia kerfuffle over NSA whistleblower Edward Snowden, who’s holed up somewhere in Russia. And at least for now, it’s in both countries’ interests to remain on good terms.

With the days of the Space Race long gone, the new working relationship is much closer to what James Osberg, a former space engineer, has termed a “reluctant co-dependency.” NASA retired its space shuttle fleet in 2011 and now relies on Russian Soyuz capsules to transport astronauts and supplies to the station — at a cost of $71 million per seat.

As recounted by Politico, Russians are more experienced in manned spaceflights and launches but Americans contribute more advanced electronic technologies to the operations. Meanwhile the ISS features “U.S. solar arrays and power systems,” “Russian core life-support systems,” and “a navigation system that comes from both countries.”

"I don't think it's an insignificant fact that we're starting to see a number of people with the idea that the International Space Station be nominated for the Nobel Peace Prize. It's not trivial. It has continued to exist and continued to function with people from a variety of cultures and beliefs, but we all are focused on the mission of the International Space Station.”

As much as some Americans might like the idea of cutting off political and economic ties with Russia over its actions in Ukraine, there are many points of necessary cooperation.

But not everyone’s happy about needing to “thumb rides from the Russians,” in the words of Tesla Motors co-founder Elon Musk, who testified before Congress on March 5 that economic sanctions on Russia could negatively impact American aerospace contractors. Musk's company Space Exploration Technologies (“SpaceX”) has a $1.6 billion contract with NASA to ferry cargo to the space station.

In fact, federal budget cuts have increasingly shifted US space exploration from the public sector to the billionaire-backed private sector. NASA’s 2013 post-sequestration budget has shrunk to $16.8 billion (a 6 percent reduction) and US President Barack Obama has requested just $17.5 billion for fiscal year 2014. Meanwhile, Russia’s space program is increasing its annual budget to $51.8 billion from 2013 through 2020, reports Politico.

This year NASA will be awarding key contracts to American companies to build commercial passenger spaceships that could “launch American astronauts from the US by 2017 and [end] our reliance on Russia to get into space,” according to spokesperson Bob Jacobs. Discovery News reports:

Maybe the Cold War reflexes we’re seeing over Ukraine have some echoes in space after all.